In Lviv, Guterres, Erdogan and Zelensky worry about tensions around the Zaporizhia power plant

The leaders of Ukraine, Turkey and the UN, meeting in Lviv, Ukraine, discussed two key issues in this conflict on Thursday: the grain export agreement and the growing tensions… 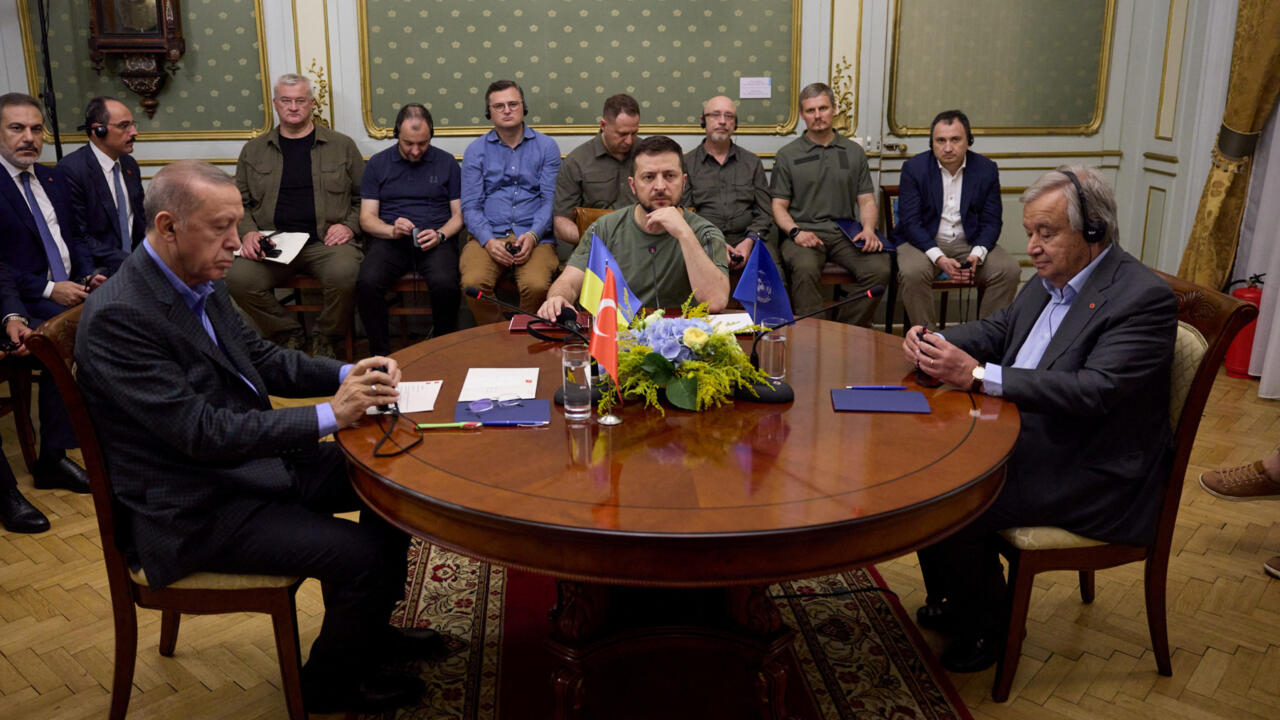 In Lviv, Guterres, Erdogan and Zelensky worry about tensions around the Zaporizhia power plant

The leaders of Ukraine, Turkey and the UN, meeting in Lviv, Ukraine, discussed two key issues in this conflict on Thursday: the grain export agreement and the growing tensions around the power plant Zaporizhia nuclear power plant.

For President Zelensky, the arrival of his Turkish counterpart is a "

As we continue our efforts for a solution, we have been and continue to be on the side of our Ukrainian friends

While swiftly condemning the Russian offensive, Turkey opted for neutrality between the two countries and did not join Western sanctions against Moscow.

Ankara, however, provides Ukraine with its famous

This meeting with Turkish President Recep Tayyip Erdogan was important for Volodymyr Zelensky because it is with him that Ukraine has already negotiated the resumption of grain exports in July.

This meeting made it possible to renew the confidence between the three parties concerning this agreement.

Antonio Guterres, the UN Secretary General, has also said that he wanted to intensify exports before winter, they are crucial for many African countries.

The Zaporizhia power plant at the center of the discussions

, the UN and Ukraine call for the demilitarization of the area.

But for the moment, no trace of a potential agreement that would allow the establishment of a demilitarized zone or an inspection of the plant by the International Atomic Energy Agency (IAEA).

Especially since the negotiations are complicated on this subject.

The Russians, who occupy the plant, were not invited to this meeting and it is therefore difficult to come to an agreement without them.

The Ukrainian president therefore took the opportunity to repeat his fears about the fate of the plant.

Antonio Guterres reminded him that damaging the plant would be suicide for any country that dared to bomb it.

Recep Tayyip Erdogan was alarmed by the danger of a “

In the morning, the Russian army assured that it had not deployed "

" in and around the Zaporijjia power plant, contrary to what Kiev claims.

Ukraine indeed accuses Russia of using the plant as a firing base on Ukrainian positions, which Moscow denies.

►Also listen: In Ukraine, questions around the vital question of nuclear security

President Zelensky ruled out any peace negotiations with Moscow without the prior withdrawal of Russian troops from the territory of Ukraine: "

They should first leave our territory, then we'll see

not to trust Russia