Kevin Kendall stops his car at an environmentally friendly gas station, the only stop in Birmingham, Britain's second largest city, and quickly supplies his car with clean energy. 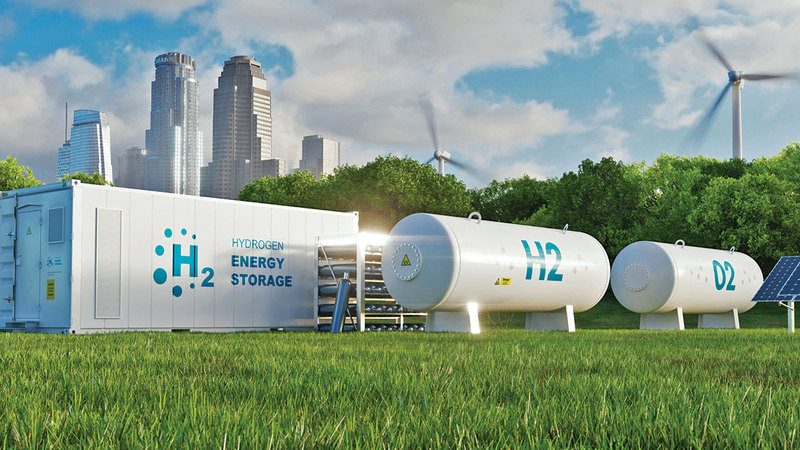 Kevin Kendall stops his car at an eco-friendly gas station, the only stop in Birmingham, Britain's second largest city, and quickly powers his car with clean energy.

Green hydrogen is getting a lot of attention as governments seek to cut carbon emissions amid record high temperatures, and to support energy supplies damaged by Russia's war against Ukraine, where Russia is a major oil and gas producer.

But the wheel of the “hydrogen economy” has not started to turn completely, and it is waiting to be adopted by the most polluting sectors such as steel and aviation.

And for Kendall, being a green hydrogen user means he doesn't have to stand in line on his lunchtime drive to a gas station.

"Very little green hydrogen is being produced in Britain right now," the chemical engineering professor told AFP. "Now we have to move on."

In Birmingham, central England, Kendall pays about 50 pounds ($60) to fill his Toyota Mirai with green hydrogen, which is produced at a facility near the gas station.

The amount is equivalent to nearly half the value of the bill for filling a similar diesel car, in the wake of Russia's war on Ukraine, which caused a skyrocketing price of fossil energy.

Despite the price advantage, there are only about a dozen hydrogen fueling stations in Britain.

And while hydrogen is the most abundant element on Earth, it's trapped in water and hydrocarbons, like natural gas, which means it's "difficult to manufacture," according to Kendall's daughter, Michaela Kendall.

Adelan, set up 26 years ago, is Britain's longest-lived fuel cell maker, which also runs on LPG.

"Since the Russian war on Ukraine, the trend has shifted more towards a green hydrogen economy," says Minh Kuy Lee, head of hydrogen research at Rystad Fuel.

"Alongside the many incentives in the second half of 2022 globally, green hydrogen seeks to satisfy the energy system's triplet: energy security, cost-absorption and sustainability."

The fallout from the war prompted the European Union to boost its gas reserves by cutting consumption by 15%.

The consortium seeks significantly to increase the supply of green hydrogen, which is made from water through electrolysis and renewable energy.

This is compared to the more available blue hydrogen, which environmentalists dispute, because it is produced from natural gas in a process that releases carbon dioxide into the atmosphere.

The company's chief executive, Michaela Kendall, who oversees the work, says she expects "to increase hydrogen capacity, but it will take time."

“Hydrocarbons will continue to be used for the foreseeable future, because the hydrogen economy has not really developed, it is just at an early stage,” she says.

The British government says an investment of £9 billion is needed to make hydrogen a cornerstone of the UK's greener future as it strives to achieve zero carbon emissions by mid-century.

The plan in Birmingham is to build about 10 hydrogen fuel stations in the next few years, after 120 hydrogen-powered buses arrive in the city in 2023. Other British cities, including Aberdeen in Scotland, are on the same path.

But only Los Angeles has had a reasonable success with nearly 9,000 hydrogen vehicles and 40 hydrogen stations, says Kevin, emphasizing that this is what we would like Birmingham to be.

Recently, the demand for electric cars has increased, and the Toyota car, which is similar to a normal car inside and out, is powered by electricity produced by mixing green hydrogen with oxygen in a fuel cell.

Water vapor is the only waste emitted from this car capable of covering a distance of 640 km.

The Adelan solid oxide fuel cell is described as an "electrical device" that generates power for batteries.

"It's ready for hydrogen, but we tend to use hydrocarbon fuels, because it's easier to get it now," Michaela says.

"We use low-carbon fuels, such as bio-liquefied petroleum gas," she says.

The lack of hydrogen infrastructure means that people who want an environmentally friendly alternative to gasoline or diesel will likely continue to buy electric cars.

Despite long charging times for electric car batteries and a spike in electricity prices this year, Britons are quickly abandoning polluting cars before the UK bans sales of new diesel and petrol cars from 2030.

This comes at a time when the giant oil and gas company BP recently revealed plans to set up green hydrogen production facilities in the United Kingdom.

• In Birmingham, central England, Kendall pays about 50 pounds ($60) to fill his Toyota-Mirai with green hydrogen, which is produced at a facility near the gas station.

The amount is equivalent to nearly half the value of the bill for filling a similar diesel car, in the wake of Russia's war on Ukraine, which caused a skyrocketing price of fossil energy.