Russian President Vladimir Putin said that Moscow values ​​its relations with countries in Latin America, Asia and Africa, and is ready to provide its allies with modern weapons. Exponent 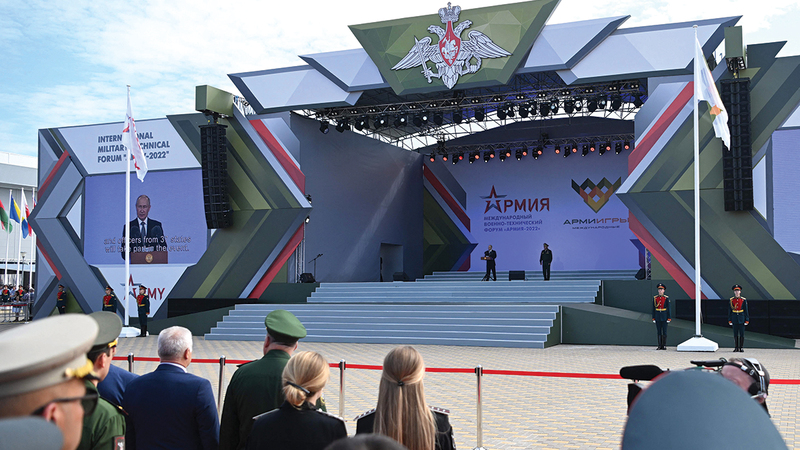 Russian President Vladimir Putin said that Moscow values ​​its relations with countries in Latin America, Asia and Africa, and is ready to provide its allies with modern weapons.

"We are ready to offer our allies the latest types of weapons, from small arms to armored vehicles and artillery to warplanes and drones," Putin said at the opening ceremony of the "Army-2022" forum near Moscow.

Putin boasted about the capabilities of Russia's advanced weapons, saying: "Almost all of them have been used more than once in real combat operations."

In addition, Russian forces proposed a ceasefire around the Zaporizhia nuclear plant in southern Ukraine, and Vladimir Rogov, representative of the Russian authorities, told RIA Novosti yesterday that the United Nations and the European Union should not talk about disarmament, but about a ceasefire. .

Last week, UN Secretary-General Antonio Guterres warned of a potential nuclear disaster and called for the region to be demilitarized.

The day before yesterday, 42 countries demanded that Russia hand over the nuclear plant to Ukraine, and the countries said in a joint statement that the stationing of Russian military personnel and their weapons in the nuclear facility is unacceptable, including the United States of America, Britain, Norway, Australia, Japan, New Zealand and others.

"We urge the Russian Federation to immediately withdraw its military forces and all other unauthorized personnel from the Zaporizhia Nuclear Power Plant, its immediate surroundings and all of Ukraine so that the operator and the Ukrainian authorities can resume their sovereign responsibilities within Ukraine's internationally recognized borders," the countries said in their statement.

"This will also enable the IAEA to carry out verification in accordance with Ukraine's safeguards obligations under safe, secure and timely conditions," the statement continued.

The largest nuclear power plant in Europe and the surrounding area, which is controlled by Russian forces, was bombed for weeks, and Russia and Ukraine accused each other of bombing the plant.

Russia announced, yesterday, that it will do everything necessary to allow specialists from the International Atomic Energy Agency to visit the nuclear plant, and Russian Foreign Ministry spokeswoman Maria Zakharova said in a statement yesterday: “In close cooperation with the Agency and its leadership, we will do everything necessary to reach the specialists of the International Agency.” Atomic Energy Agency to the station and provide a realistic assessment of the destructive actions of the Ukrainian side,” according to the statement.

Ukraine announced that the Russian forces that crossed the Dnieper River in the Russian-controlled city of Kherson, may remain stuck in the area after bombing all its bridges, and the Energodar municipality, where the Zaporizhia nuclear plant is located, said that the danger increased every day.

Officials in Moscow said that the Russian army had killed more than 100 "foreign mercenaries" in attacks during the past 24 hours that also left more than 50 wounded in the Kharkiv region.

• “The weapons of our allies include armored vehicles, artillery, warplanes, and drones.”