The war in Ukraine failed to solidify Russia's power or unite the country's influential business and political groups. Had President Vladimir Putin achieved the quick victory on which he was clearly counting when he launched his "special operation", he would have cemented his position as a leader; But as the conflict continued, the . was forced to 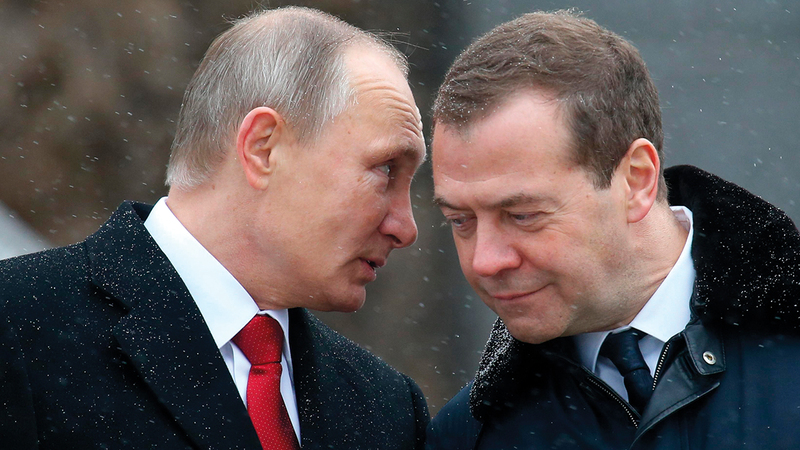 The war in Ukraine failed to solidify Russia's power or unite the country's influential business and political groups.

Had President Vladimir Putin achieved the quick victory on which he was clearly counting when he launched his "special operation", he would have cemented his position as a leader;

But as the conflict continued, elites were forced to think about their future and try to find their place in it.

Putin himself is showing no intention of stepping down, but he appears increasingly to be holding back.

Elites and potential successors are watching his every military move, but they can already see that he has no place in their post-war vision of the future.

His only remaining function in their conception of the new age of peace would be to nominate a successor and leave him to the stage.

So, the war sparked the public race for Putin's successors.

In recent years, political maneuvering has remained in the shadows, but in this new era, loud statements and high-profile political gestures are once again the norm.

It is as if an active election campaign is already underway, with bureaucrats and officials within the ruling party doing their best to get into the spotlight and even attack each other.

Until recently, such behavior was almost unthinkable;

The presidential administration acted silently, while the high-ranking officials of the ruling United Russia party made promises on social policies.

His hard-line comments on foreign policy issues and insults to Western leaders often sound comical, but the role he is trying to play is clear.

He mixes extreme isolationism with populism, and blames external enemies for internal problems.

Another politician who has made vociferous gestures recently is the first deputy chief of staff and secretary of the Kremlin's political bloc, Sergei Kiriyenko, who has been charged with the responsibility of overseeing the separatist republics in the Donbass.

He has become one of the most prominent politicians of the new era, although previously - since becoming a presidential envoy in the early 2000s - he has never shown any penchant for the limelight.

But, now, Kirienko is beginning to speak, out loud, of the fascists, the Nazis, and the unique mission of the Russian people, and is at the forefront of public events.

In Donbass, a monument was unveiled to "Grandma Anya", the elderly woman whom the Russians tried to turn into a symbol of Ukraine's "liberation".

It clearly confirms his position as coordinator of the Donetsk and Luhansk republics.

In addition, media reports confirmed that those who occupy administrative positions in the Donbass republics are graduates of the Conservative School.

Although Kirienko is not directly involved in the military campaign, he has clearly succeeded in carving out a niche for himself on Putin's military agenda.

The other contestant in the Battle of the Hawks is the Duma Speaker, Vyacheslav Volodin.

Since moving from the Kremlin, as the first deputy chief of staff, to the State Duma, Volodin has strengthened his public presence, making many provocative statements.

Now he is redoubling his efforts, supporting the ban on foreign words on storefronts and calling for the death penalty to be kept in Donetsk and Luhansk.

Other influential bureaucrats adopted a very different strategy, choosing to steer clear of the "special operation" issue, as their position permitted.

This silence is in itself a political gesture.

Before the war, Prime Minister Mikhail Mishustin and Moscow Mayor Sergei Sobyanin, both considered contenders for Putin's succession, were remarkably outspoken about the "special operation" in Ukraine.

Sobyanin came to the line by appearing at a rally in support of the operation at Moscow's Luzhniki Stadium in March, and traveled to Luhansk in June, but he has not yet been spotted in army uniform or calling for "crushing Nazism".

The rationale for his silence is that war is temporary, and relations with the West, and even Ukraine, must be restored at some point and somehow.

When that time comes, those who have not humiliated the "enemy states," or directly participated in the military campaign, will be in a better position to do so.

However, silence has its own dangers.

And if, in the end, Putin demands the full commitment of all bureaucrats about Donbass and the current military operation, the fact that they have remained silent could be against them.

The two strategies - loud gestures and deafening silence - reflect the different approaches and assumptions of those who use them.

The hawks operate on the premise that the successor will be chosen by Putin, so they emulate his behavior in their attempts to win him over, noting that they will faithfully preserve his legacy.

"After Putin there will be Putin," Volodin once said.

Those who remain silent depend on a different succession scenario, in which the new leader will be chosen by the elites.

And the 2022 edition of the succession race is a virtual event, of course.

Putin has not announced the start of the selection of candidates, and it is clear that he does not plan to leave his job: the presidential administration is preparing for elections in 2024, and it is clear who will be in the central role.

War and possible annexation of other lands would obviate Putin's need for a statement of any kind, and he wants to run as the man who defeated Nazism (regardless of the actual results of the war), and as a historical figure who doesn't need to make any promises to his people.

However, the interest shown in the succession race by senior members of the elites - not to mention the enthusiasm of its participants - makes clear that the regime wants to discuss and (see) a post-Putin future.

It may seem that the extremes of wartime should preclude any ideas of what comes next.

But whatever that future looks like, there seems to be less room for Putin in it.

Loud statements and high-definition political gestures are once again the norm.

It is as if an active election campaign is already underway.

• The logical explanation for the silence of Prime Minister Mikhail Mishustin, is that war is a temporary issue, and relations with the West, and even with Ukraine, must be restored at some point and somehow.

• Other influential bureaucrats have adopted a very different strategy, choosing to move away from the topic of “special operation,” as their position permits.

• The hawks operate on the basis that the Caliph will be chosen by Putin, so they imitate his behavior in their attempts to win him over, indicating that they will faithfully preserve his legacy.