6,500 hectares burn in the uncontrolled fire of Vall d'Ebo and cause the evacuation of 1,200 people

The fire caused on Saturday night by a dry lightning in Vall d'Ebo is still out of control and has already become the worst of the decade in the Valencian Community. The... 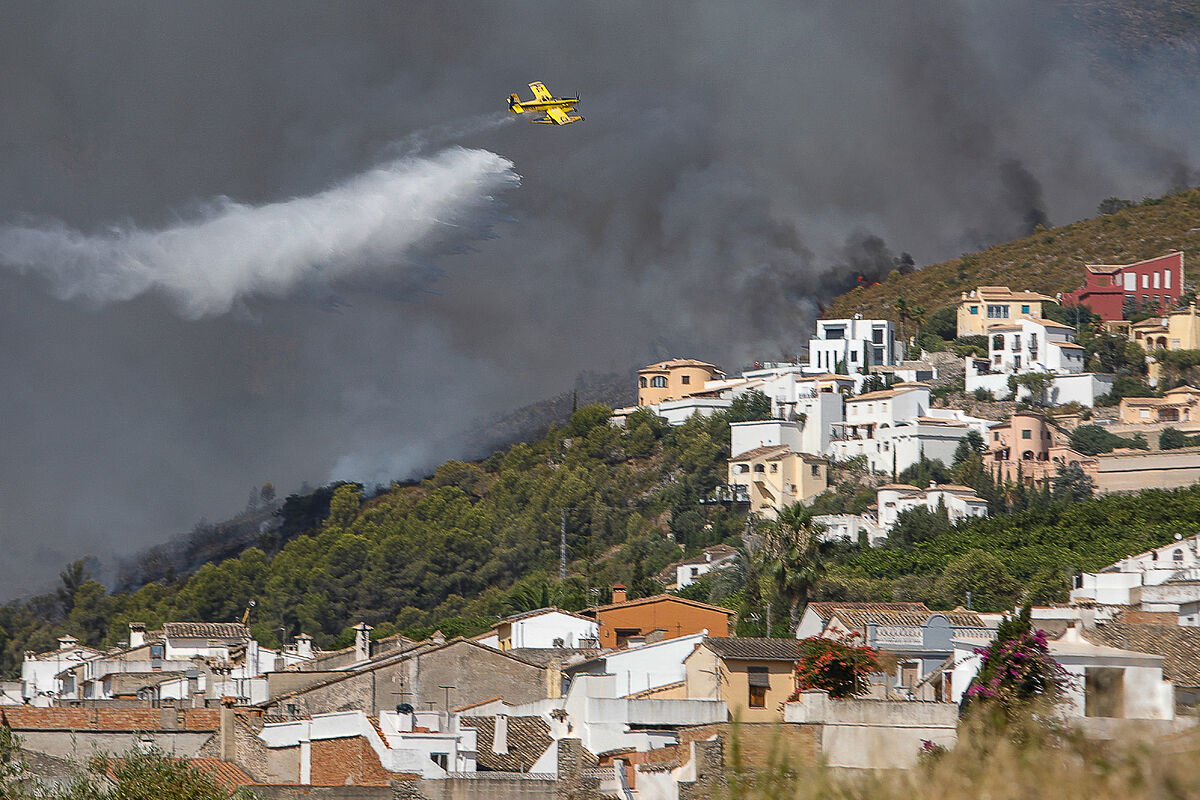 The fire started on Saturday night by a dry lightning in

is still out of control and has already become the worst of the decade in the Valencian Community.

The latest measurement estimates 6,500 hectares burned and the forecast is that it could reach 8,000 in the next few hours, with a circular perimeter of more than 50 square kilometers that has already caused the evacuation of 1,200 people, according to data from the Generalitat.

This has been transmitted in the meeting in the advanced command post and to which the affected mayors have attended.

, first mayor of Pego, who has confirmed that there are three active fronts of concern.

The first advances between the municipalities of

and efforts are focused there to prevent it from jumping the road and entering the province of Valencia, towards

The other front is in the

and surrounds the Barranco del Infierno and a third, the most worrying, affects Castell de Castells, which could lead to the eviction of the town of

The Emergency deputy of the Diputación de Alicante, Javier Sendra, has confirmed that land resources are also being concentrated there to ensure that the CV-720 highway can act as a firewall.

70 in homes in the municipalities of Castell de Castells and

, where the flames were heading, have had to leave their homes.

With these, there are already more than 1,000 residents of several small municipalities in the Marina Alta region who have had to abandon their homes and take refuge in shelters set up in the Pego Neighborhood Espai and the local Ambra School, assisted by the Red Cross and with fear in the body.

The residents of Vall d'Ebo, Benirrama, Benialí, Alcalà de la Jorada and the district of Calvario de Pego fearfully see how the fire is devouring an area of ​​high ecological value, their crops and their homes, leaving more problems than who already live in this area because of the depopulation that was beginning to be revitalized through rural tourism.

The forecasts, however, are not unfavorable because it is expected that the wind will not favor the extension and the humidity will rise to 95% tonight.

extinction from the air

The seriousness of this fire, to which is added that of Les Useres in Castellón and that of Calles in Valencia, have led to a meeting of

(CECOPI) chaired by the Minister of Justice and the Interior,

, who has confirmed that the fire in the Vall d'Ebo can only be extinguished from the air as it is a mountainous area with ravines that are difficult to access.

, to offer us all the collaboration and we already have that of Castilla La Mancha", explained the minister.

These means join the fire departments of the Provincial Consortium of the Diputación de Alicante and the Generalitat.

The complexity lies in ensuring that aerial means can act safely, given that the smoke and the circular condition of the fire complicate visibility, according to Bravo.

This fire has already become the worst of the decade.

The last devastating one was located

another fire was also declared this Sunday in the area of ​​Les Useres, in the interior of the province, and that has burned around 350 hectares and is still active, according to sources from the Generalitat Emergencies, but with a favorable forecast.

The aerial means have been withdrawn, the wind is not blowing and they have managed not to affect the Penyagolosa Natural Park.

In this case, as well as in

, in the interior of Valencia, which is already stabilized, there have been no evictions.