“As a result of the offensive actions of the allied forces”: the RF Ministry of Defense announced the complete liberation of the settlement Peski

As a result of the offensive, the allied forces completely liberated the settlement of Peski in the DPR. This was stated in the Ministry of Defense of the Russian Federation. In addition, the Russian Aerospace Forces delivered high-precision strikes on the temporary deployment of the 10th mountain assault brigade in the vicinity of the settlement of Pereezdnoye in the DPR. A HIMARS launcher and a depot with ammunition for it were destroyed near Kramatorsk. 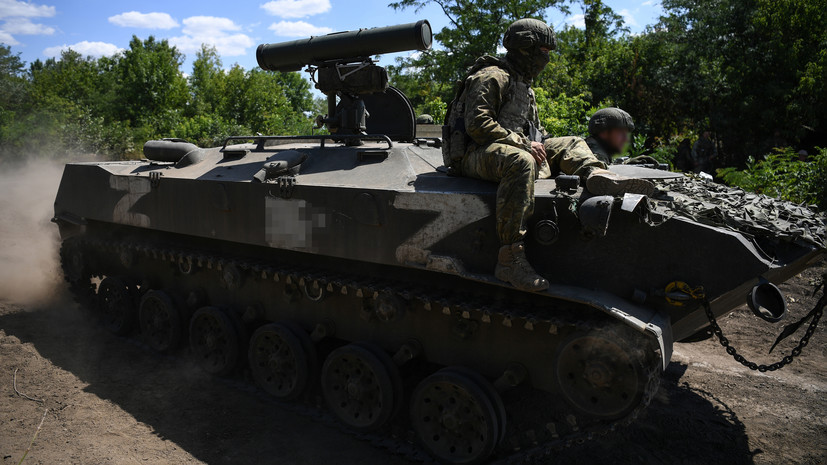 The settlement of Sands in the DPR has been completely liberated.

“As a result of the offensive actions of the allied forces, the settlement of Peski of the Donetsk People’s Republic was completely liberated,” Konashenkov said.

The representative of the Russian Defense Ministry added that as a result of strikes by high-precision long-range sea and land-based missiles, as well as multiple rocket launchers on enemy reserves in the area of ​​the Gavrilovka railway station in the Kharkiv region, more than 70 servicemen of the 30th mechanized brigade of the Armed Forces of Ukraine were killed and more than 300 were wounded.

“Traffic on this section of the railway is completely blocked,” the Russian Defense Ministry noted.

In addition, the Russian Aerospace Forces delivered high-precision strikes on the temporary deployment of the 10th mountain assault brigade in the area of ​​​​the settlement of Pereezdnoye in the DPR.

As a result, up to 170 nationalists and 12 units of military equipment were destroyed, the Ministry of Defense stressed.

“During the offensive operations of the allied forces in the area of ​​​​the settlement of Artyomovsk of the Donetsk People's Republic, two companies of the 72nd mechanized brigade were completely destroyed,” the Russian Defense Ministry said.

Concentrated fire strikes on command posts of units of the 66th mechanized brigade and the Right Sector armed formation * in the DPR destroyed more than 100 nationalists and ten pieces of military equipment.

Also on russian.rt.com “Mass desertion is recorded”: the Russian Ministry of Defense announced the destruction of more than 50% of the personnel of two brigades of the Armed Forces of Ukraine

In the Kramatorsk region of the DPR, a HIMARS launcher and a warehouse with ammunition for it were destroyed.

In the Nikolaev region, two Mi-24 helicopters of the Ukrainian Air Force were destroyed.

During the day, Russian air defense systems destroyed four Ukrainian drones in the Mykolaiv and Kharkiv regions and shot down four HIMARS rockets in the air in the Novaya Kakhovka region.

As the Russian Defense Ministry added, since the beginning of the special military operation, 267 aircraft, 148 helicopters, 1,736 drones, 365 anti-aircraft missile systems, 4,297 tanks and other armored combat vehicles, 798 combat vehicles of multiple launch rocket systems, 3,295 field artillery guns and mortars have been destroyed. , as well as 4858 units of special military vehicles.

At the same time, the Armed Forces of Ukraine continue to strike at the civilian infrastructure of Donbass.

According to an RT correspondent, according to the NM DPR, over the past day, Donetsk was fired upon by the Armed Forces of Ukraine from Grad MLRS installations from positions in the village of Krasnogorovka.

20 missiles were fired at the Kirovsky district of Donetsk.

10 artillery shells of 155 mm caliber were fired at the Kievsky district of Donetsk.

“Voluntarily laid down their arms and surrendered to the Russian military”

The Russian Defense Ministry reported that the prisoners of war of the Armed Forces of Ukraine decided to remain in the territory controlled by Russia because of their unwillingness to fight and the fear of being on the front line again.

As specified in the department, the former Ukrainian military spoke about the corruption prevailing in the Armed Forces of Ukraine, the intimidation of personnel, the absence of any control in the units, as well as the “barbaric attitude towards the civilian population, which is widely used by nationalists as a human shield.”

“They all voluntarily laid down their arms and surrendered to the Russian servicemen in order to save their lives.

According to them, not many people in the Ukrainian army succeed now, since the fighters of the nationalist battalions, acting as detachments and threatening the soldiers with execution, do not allow anyone to leave positions located on the line of contact, ”the Russian Defense Ministry said in a statement.

The defense department noted that the former Ukrainian soldiers are completely satisfied with the conditions of detention.

Prisoners are provided with three hot meals a day, medical assistance is provided.

They are also given the opportunity to contact their families.

** "Azov" - the organization was recognized as a terrorist organization by the decision of the Supreme Court of the Russian Federation of 02.08.2022.