“Mass desertion is recorded”: the Ministry of Defense of the Russian Federation announced the destruction of more than 50% of the personnel of two brigades of the Armed Forces of Ukraine

As a result of the offensive of the allied forces in the Artyomovsky and Avdeevsky directions, more than 50% of the personnel in the 14th and 66th mechanized brigades of the Armed Forces of Ukraine were liquidated, the Russian Defense Ministry reported. Also, the department drew attention to cases of mass desertion and abandonment of positions by Ukrainian nationalists. In addition, the Russian Foreign Ministry called "acts of nuclear terrorism" the ongoing shelling of the territory of the Zaporozhye nuclear power plant by the military of the Kyiv regime. 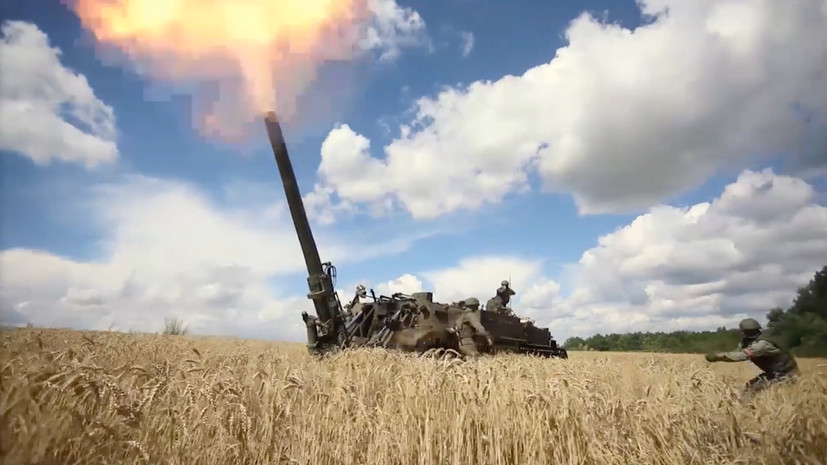 Ukrainian nationalists are deserting en masse and leaving their combat positions in the Artyomovsky and Avdeevsky directions, the press service of the Russian Defense Ministry reported.

“As a result of active offensive combat operations of the allied forces, more than 50% of the personnel in the 14th and 66th mechanized brigades of the Armed Forces of Ukraine in the Artyomovsky and Avdeevsky directions were liquidated.

Mass desertion and unauthorized abandonment of their positions by the nationalists are being recorded, ”said Lieutenant General Igor Konashenkov, spokesman for the Russian Defense Ministry, during a briefing on August 11.

He also said that as a result of air strikes, missile forces and artillery, 20 command posts of brigade and battalion levels, as well as eight ammunition depots of the Armed Forces of Ukraine in the Donetsk People's Republic and Zaporozhye region were hit.

Also destroyed were a warehouse of rocket and artillery weapons in the Kharkov region, a locator for guidance of the S-300 anti-aircraft missile system near Kramatorsk, and 264 areas of accumulation of manpower, weapons, military and special equipment.

The shelling by the Kyiv regime of the territory of the Zaporozhye nuclear power plant is an act of nuclear terrorism, said Ivan Nechaev, deputy director of the information and press department of the Russian Foreign Ministry.

“In recent days, Ukrainian units have shelled the territory of the Zaporozhye nuclear power plant several times, which are acts of nuclear terrorism.

Such actions by the Kyiv regime could lead to a catastrophe far exceeding the consequences of the accident at the Chernobyl nuclear power plant,” he said.

According to him, the zone of radiation damage can affect not only the nearby regions of Ukraine, Russia, the DPR and LPR, but also the territory of European countries, endangering millions of lives.

On the night of August 11, the Ukrainian military made another attempt to attack the ZNPP.

According to Vladimir Rogov, a member of the main council of the military-civilian administration of the region, Russian air defense systems shot down all enemy missiles and UAVs.

“The nuclear power plant is in operation.

There is no radiation danger,” he said on the air of the Russia 24 TV channel.

On the fact of the shelling, the chairman of the Investigative Committee of Russia, Alexander Bastrykin, instructed to open a criminal case.

“Investigators of the Investigative Committee of the Russian Federation, within the framework of a criminal case, will record and investigate the circumstances of the criminal activities of Ukrainian nationalists aimed at creating a large-scale catastrophe.

The actions of all those involved will be given a legal assessment, ”the message says.

As noted in the press service of the department, the criminal actions of the Kyiv regime pose a threat of a nuclear accident and a humanitarian catastrophe.

On the initiative of the Russian Federation, a meeting of the UN Security Council will be held on Thursday in connection with the shelling of the Zaporozhye nuclear power plant by Ukrainian troops.

Capture of a stronghold of the Armed Forces of Ukraine

The Russian Ministry of Defense showed footage of the capture by paratroopers of a stronghold of Ukrainian nationalists during reconnaissance and search operations.

It is noted that Russian paratroopers attacked the positions of soldiers of the Armed Forces of Ukraine with fire support from a BMD-2K-AU airborne combat vehicle and an anti-tank missile system.

The result of the attack was the successful completion of the task of liberating the territory, as well as the destruction of two armored vehicles and over ten nationalists.