Tragedy in Cuba: at least one dead, 17 missing and 121 injured in a fuel fire

One dead, 121 injured and 17 missing is the provisional balance of the explosion of two fuel tanks in the city of Matanzas, in western Cuba, where the... 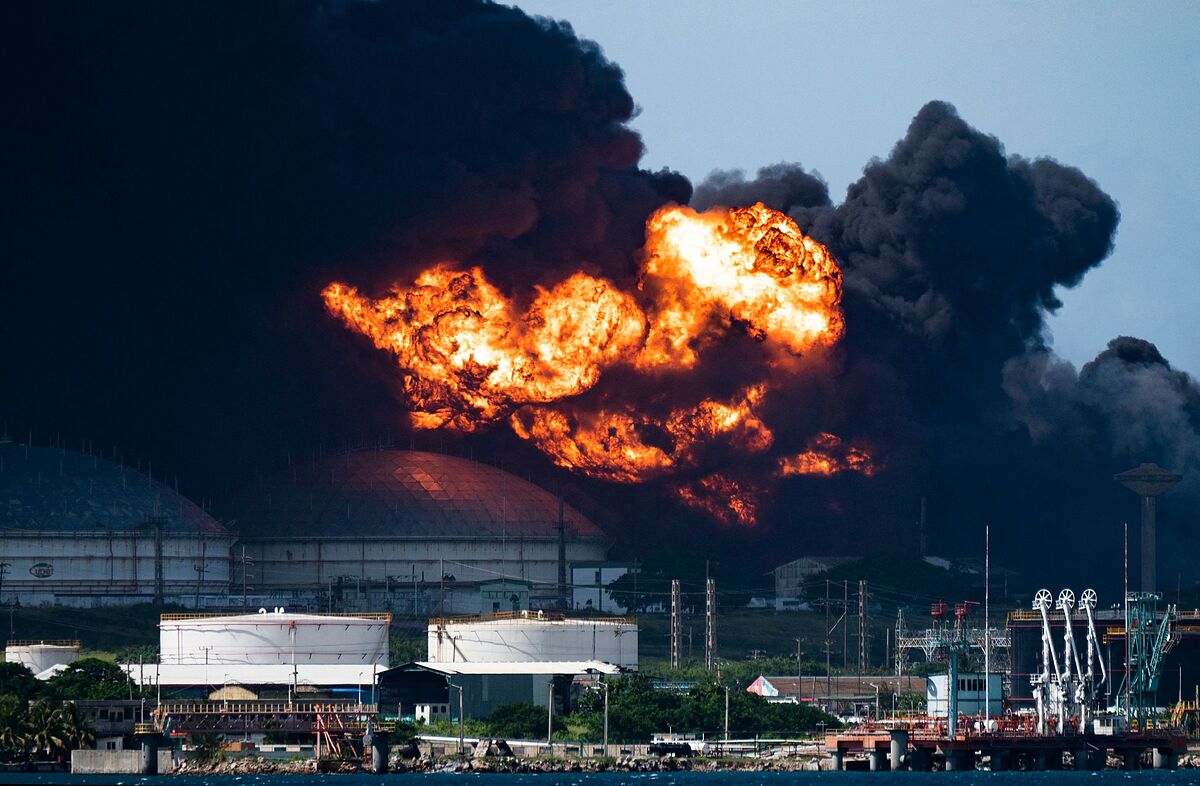 where the anxiety continues due to the fire that does not go out.

provincial director of Health in Matanzas, said at a press conference that "a body has been recovered at the accident site," and that specialists are "identifying it."

almost all due to burns,

85 were discharged, 36 are hospitalized, of which

five are in critical condition.

"firefighters who were in the area closest"

to the fire, the presidency said on its

account, adding that "Cuba requested help and advice from friendly countries with experience in the oil issue."

The response came quickly: "We express deep gratitude to the governments of

which have promptly offered solidary material aid in the face of this complex situation," President

"We also appreciate the offer of technical advice from the

said that the US proposal "is already in the hands of specialists for due coordination."

Díaz-Canel commented that the extinction of the fire "may take time", while the director of

specified that the country had never faced a fire of "the magnitude that we have today."

The fire broke out on Friday afternoon after

lightning struck one of the tanks

at the supertanker base located on the outskirts of Matanzas, 100 kilometers east of

At 05:00 this Saturday, the fire spread to a second warehouse.

"The noise was felt, like a wave of air that was taking you back," Laura Martínez,

a resident of the community of

about two kilometers from the area of ​​the incident

According to the Matanzas authorities, the number of

When the first explosion occurred,

and his family left his house in La Ganadera.

They returned "at around three in the morning" because the children were sleepy, this 32-year-old woman explained to AFP.

But around 0500 they began to hear more explosions, "it felt like pieces of the tank were falling", he added.

33, lives in the same community with her husband and three children.

"We went to bed around 3:30 and 4:45, the bombings were felt, like thunder. We jumped out of bed, when we went out into the street the sky was yellow," the woman told AFP.

"The fear of people on the street is uncontrollable," she said.

According to Cupet, the first deposit "contained some 26,000 cubic meters of national crude oil, about 50% of its maximum capacity," when it was struck by lightning.

"Apparently there was a fault in the lightning rod system, which could not withstand the energy of the electrical discharge," according to Granma.

a 37-year-old welder who works at the site, cannot explain how the tanks' lightning rod system failed.

The two tanks supply the

the largest in Cuba, but pumping to that plant has not stopped,

Several helicopters began to pour seawater into extinction tasks, work stopped in the afternoon due to the increase in flames.

At the end of the afternoon, with a minor fire, it was resumed in front of the bay of Matanzas, a city of 140,000 inhabitants.

The fire occurs at a time when the island has been experiencing difficulties since last May to meet the increased demand for energy due to the summer heat.

Since May, the authorities have scheduled blackouts of up to 12 hours a day in some regions of the country.

Since then there have been twenty protests in towns in the interior of the island.

Cuba currently has an

insufficient for the demand of households at times of maximum consumption, which reaches 2,900 megawatts, according to official information.