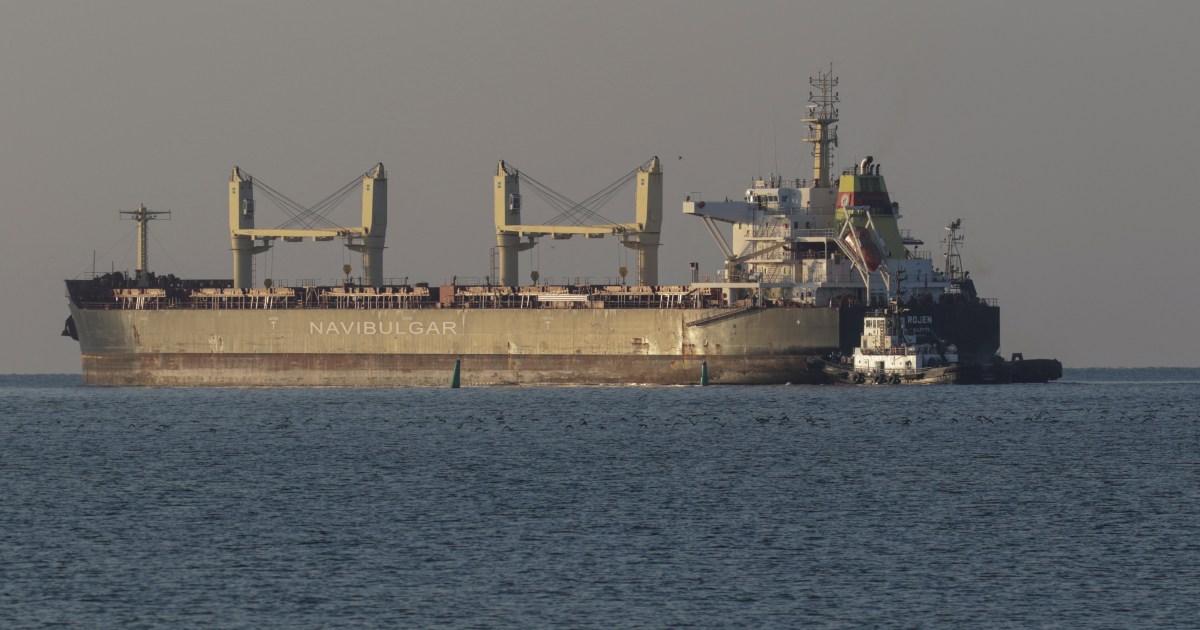 A fleet of four ships carrying grain shipments set sail early Sunday from Ukraine's ports in the Black Sea, in the second shipment of food products since Ukraine and Russia reached a safe transit agreement on July 22.

Ukraine's Infrastructure Minister Oleksandr Kobrakov said on Twitter that the Liberian-flagged ship "Mustafa Ngati" and the Star Helena, Glory and Riva Wind ships sailing under the flag of the Marshall Islands;

The contents and destinations were not specified precisely.

The Ukrainian Sea Ports Authority said on Facebook that the four bulk cargo ships were loaded with 170,000 tons of corn and other foodstuffs.

The Joint Coordination Center in Istanbul - where personnel from Russia, Ukraine, Turkey and the United Nations work - is overseeing the process of resuming grain exports in accordance with the agreement signed on July 22 in Istanbul.

Late on Saturday, the cargo ship "Volmar S" arrived in the Ukrainian port of Chornomorsk, the first ship to arrive in Ukraine since the Russian war on Ukraine last February.

"Our next step is to ensure that Ukrainian ports can handle more than 100 vessels per month," Kobrakov said.

And the Joint Coordination Center - said late on Saturday - that it had authorized the movement of 5 new ships through the Black Sea, with 4 departing from the ports of Chornomorsk and Odessa, and one coming.

For its part, the Turkish Defense Ministry said that the ships that left Ukrainian ports included the ship Glory, which carries 66,000 tons of corn and will head to Istanbul, while the ship Riva Wind, carrying 44,000 tons of corn, will go to Iskenderun.

In a related context, the joint team began in Istanbul today to inspect the ship "Polarent" coming from Ukraine, carrying corn grains.

And Anadolu Agency reported that the ship - bearing the Turkish flag - was docked yesterday evening, Saturday, north of Istanbul, after it set off from the port of Chornomorsk (southern Ukraine).

The ship loaded with 12,000 tons of corn grain was inspected by the Joint Coordination Center team, which includes representatives from Turkey, Ukraine, Russia and the United Nations.

The aforementioned ship is scheduled to continue its voyage, after completing the inspection process, towards the port of Kocaeli state on the Marmara Sea.

On July 22, Turkey, Russia, Ukraine and the United Nations signed the "Initiative Document on Safe Shipping of Grain and Foodstuffs from Ukrainian Ports" during a meeting hosted by Istanbul.

The agreement guarantees securing exports of grain stuck in the Ukrainian ports on the Black Sea to the world.

In this context, the first ship loaded with corn set off from the ports of Ukraine on the first of August, heading to Lebanon.

Before the start of the war between them, Russia and Ukraine together accounted for nearly a third of the world's wheat exports.