China announced yesterday that it had suspended cooperation with the United States in a number of areas, including dialogue between senior military leaders and climate talks. It also imposed sanctions on US House Speaker Nancy Pelosi after her visit to Taiwan. 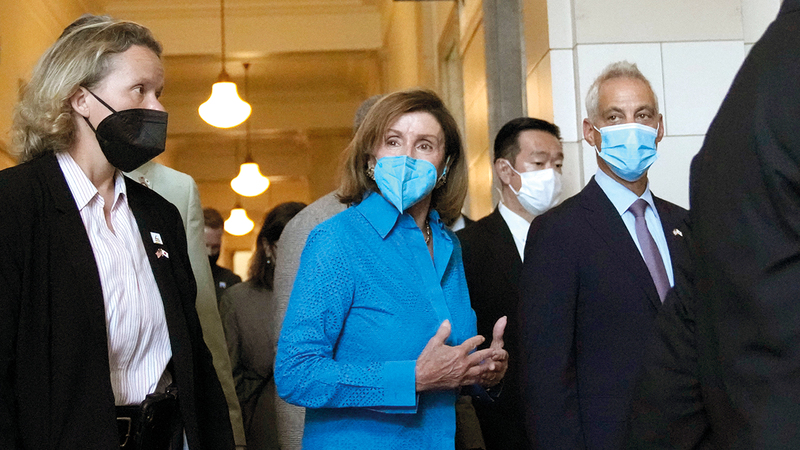 Sanctions imposed on Nancy Pelosi after her visit to Taiwan

Beijing announced a halt to cooperation with Washington shortly after Pelosi left Japan.

China announced yesterday that it has suspended cooperation with the United States in a number of areas, including dialogue between senior military leaders and climate talks.

It also imposed sanctions on US House Speaker Nancy Pelosi after her visit to Taiwan.

In detail, Beijing announced yesterday that it had suspended cooperation with Washington in a number of areas, including dialogue between senior military leaders, in response to Pelosi's visit to Taiwan.

In a statement issued shortly after Pelosi left Japan, the last leg of her Asian tour, China announced the cancellation of a planned bilateral meeting on a military-maritime security mechanism.

China's Foreign Ministry also said in a statement that it had suspended climate talks with the United States, as well as cooperation in preventing cross-border crime and returning illegal immigrants, among eight specific measures.

The Chinese Foreign Ministry condemned Pelosi's "disregard" of "China's strong opposition" to her visit to Taiwan.

China and the United States, the two largest emitters of greenhouse gases, announced in a surprise move last year that they had reached a climate agreement at the COP26 conference in Glasgow.

Under the agreement, the two countries pledged to accelerate climate action over the next decade and meet regularly to "address the climate crisis".

China announced that it would impose unspecified sanctions on Pelosi personally and her first-degree family members in response to her "malicious" and "provocative" actions.

"In ignoring China's serious concerns and resolute opposition, Pelosi has insisted on visiting the Taiwan region of China," the statement said.

This constitutes a serious interference in China's internal affairs."

"This seriously undermines China's sovereignty and territorial integrity, seriously violates the 'one China' principle, and seriously threatens peace and stability across the Taiwan Strait," the statement added.

"In response to Pelosi's blatant provocation, China decides to impose sanctions on Pelosi and her close family members, in line with relevant laws of the People's Republic of China," the statement continued.

Pelosi had visited Taiwan, which Beijing considers an inalienable part of its territory, earlier in the week, prompting Beijing to conduct air and naval live-fire military exercises, considered the largest in its history, in the vicinity of Taiwan that will continue until Sunday.

In a related matter, Chinese Foreign Minister Wang Yi said that his country has warned the United States not to take any reckless action so as not to cause a bigger crisis.

Wang made the remarks at a press briefing after the conclusion of the Association of Southeast Asian Nations (ASEAN) meetings in the Cambodian capital yesterday.

For his part, Jing Guan, a senior official at the Chinese Embassy in Washington, said yesterday that the only way out of the crisis surrounding US-Chinese relations due to US House Speaker Nancy Pelosi's visit to Taiwan is for the United States to correct its mistakes immediately.

On the other hand, the Washington Post reported yesterday that the White House summoned Chinese Ambassador Qin Gang Thursday to denounce the escalation of measures against Taiwan and stress that the United States does not want a crisis in the region.