“In the past, I saw a glacier right in front of me, but now I can barely see it after walking for more than an hour.” In the past, when you climb the Palubong in the Bernina Mountains in the Alps, the Moterachi Glacier was located at an altitude of about 2,500 meters above sea level. 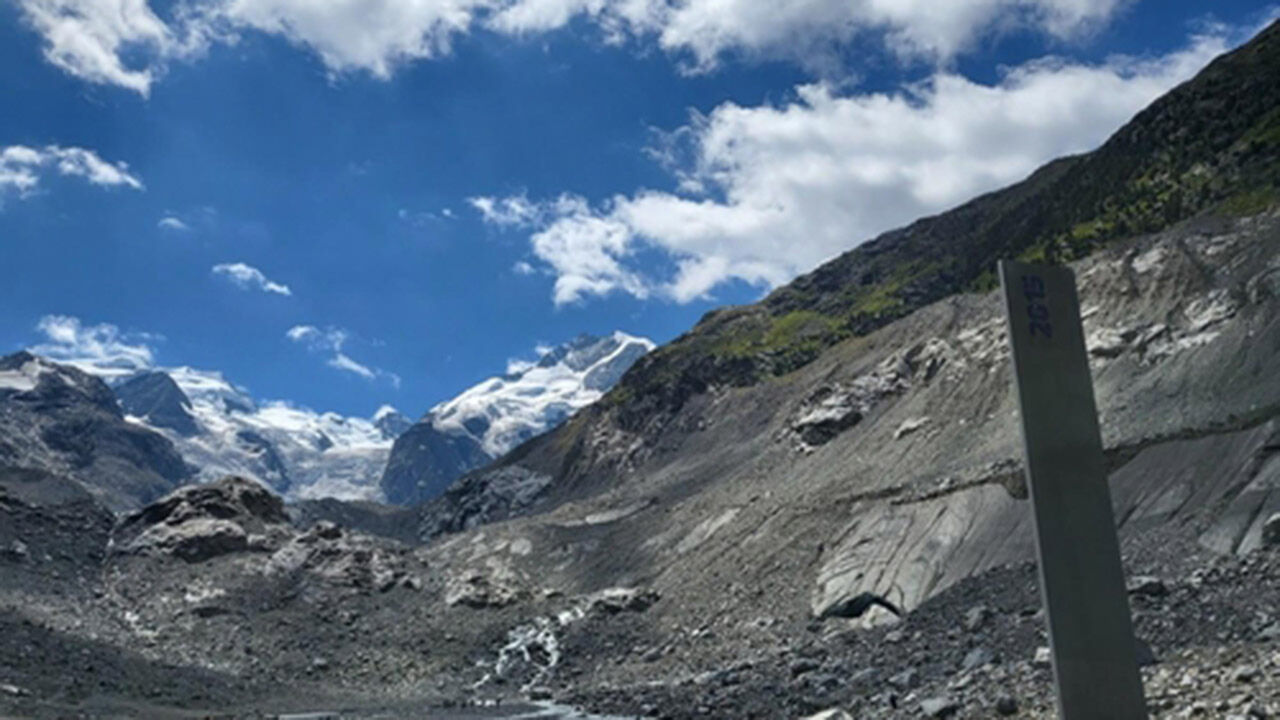 “In the past, I saw a glacier right in front of me, but now I can barely see it after walking for more than an hour.”

In the past, when you climb the Palubong in the Bernina Mountains in the Alps, the Moterachi Glacier was located at an altitude of about 2,500 meters above sea level.

Currently, tourists looking for glaciers park their cars near Moterachi Station of the same name and go to the information desk, where they are instructed to climb up 3 to 4 km further with safety equipment.

The place where Moterachi Station was built in 1910 was at the edge of the glacial snow at the time.

Glacial snow is so named because the shape of the glacier flowing down the valley from the peak of the Alps looks like a tongue.

Moterachi Station was built at the closest point to the glacier so that tourists who got off the mountain train could see the glacier right in front of their noses.

However, over 100 years, the glacial snow has shortened year by year, and those trying to reach the glacier have gotten off at Moterachi Station and started walking towards the peak.

The 'tongue' of the glacier has disappeared more than 3km, so that the trail that used to be a few minutes course is now a one-hour climbing course.

The trail has been transformed into an ordinary mountain pass so that you can't even tell that it was covered in ice in the past.

On either side of the gravel road were rows of trees and grass covered them.

As you walk towards the summit of Palaubon, you will see fresh water from the glacier that melted from the top of the mountain along the road, flowing along the rock formations as fast as valley water.

As you walk along the trail, you will see signs that tell you that 'there has been a glacial snow here' in the past.

If you walk while filming, you will reach the end of the glacial snow in 2 hours.

Rather than a place covered with a dazzling layer of ice, it is a land of gray ice mixed with rough gravel.

The ground is soaked with glacial melt water that makes your feet tingly, and the nearest ice wall is already cracking and melting.

If you look at the summit of Palau-Bong, white ice caps still remain, but the glacial snow that comes down from there seems to be barely continuing in the momentum of the long-lasting heatwave in Europe.

“To find the tip of the glacier again next year, we will have to climb more than 30 meters above where we are now.”

This is what the guide guiding the visitors said.

He said, "Some people say that it's like a 'long funeral procession' when people come up along the trail that gets longer every year."

It means that it is time to commemorate the glaciers of the Alps that are gradually disappearing.

The same is true of the Rhone glacier in the Furka Pass in the central Alps of Valais, Switzerland, which is a 3-hour and 30-minute drive from Moterachi Glacier.

Located at an altitude of 2,200m above sea level, this is also an alpine area where you have to climb through the clouds that cover the mountains, but the glaciers are disappearing.

On the 30th of last month (local time), a large freshwater puddle was built around the Rhone Glacier, which can only be seen after a long walk through a gravel field.

In the middle, an ice cube about 2m wide was floating.

When I captured the same scene as the glacier photograph taken in the summer of 2013, the current appearance of the Rhone glacier is more like an ordinary lake, unlike what it looked like eight years ago when there was only half an ice layer.

If you go towards the mountain peak from the glacial snow, there is still a glacier, but it is covered with a white tent.

It is a desperate attempt to somehow prevent the loss by reflecting sunlight.

But if you look under the tent, the glacier is melting nonstop.

In particular, the glacier cave under the tent is a must visit place for visitors to take pictures, but now the melted water falls to the extent that it is inconvenient to take pictures.

The sound of dripping water on the floor is said to sound like a leaking tap.

The floor of the cave with wooden planks was soaked with glacial water that fell like raindrops, and the molten cave ceiling had large holes everywhere, allowing the tent to be visible.

Norma Renderman (44), a visitor with filming equipment, said, "I also visited the Austrian glacier last year, and it was like the glacier had melted and I couldn't see it. It seems difficult,” he said.

"I don't know how long that cave will hold up," he said. "It's bittersweet now that visitors are coming to watch the glacier disappear, not to see the glacier."

It is a known fact in the Alps that glaciers are gradually disappearing amid climate change, but experts point out that they should have a different sense of crisis than before in that they are disappearing more rapidly than other glaciers.

Originally, the size of the ice layer was rather small, but due to the decrease in winter snowfall and summer heatwaves that have continued for several years amid global warming, the ice layer has further decreased.

White snow and ice reflect the sun's light to maintain the glacier, but as the amount decreases rapidly every year, the vicious cycle of melting ice is repeated in the Alps.

Scientists predict that 80% of the Alpine glaciers will disappear by 2100.

The loss of glaciers can have side effects on nature that are different from those of a decrease in tourists or an increase in valley water.

In early July, the glacial collapse that killed 11 people in Marmolada, the highest peak of the Dolomites in northern Italy, raised awareness of the catastrophe caused by the climate crisis.

In Switzerland too, this year, entry into and out of glacial areas that are likely to collapse are being controlled.