“Points of temporary deployment were hit”: the Ministry of Defense of the Russian Federation announced the loss of the Armed Forces of Ukraine up to a thousand people as a result of strikes

The armed forces of the Russian Federation hit the points of temporary deployment of several units of the Armed Forces of Ukraine with high-precision strikes, as a result of which up to 1 thousand enemy fighters and more than 100 pieces of weapons and equipment were destroyed. This was stated in the Ministry of Defense of the Russian Federation. According to the agency, during the strike with Kalibr missiles on the territory of a plant in Zaporizhzhia, multiple rocket launcher combat vehicles hidden in hangars were destroyed. 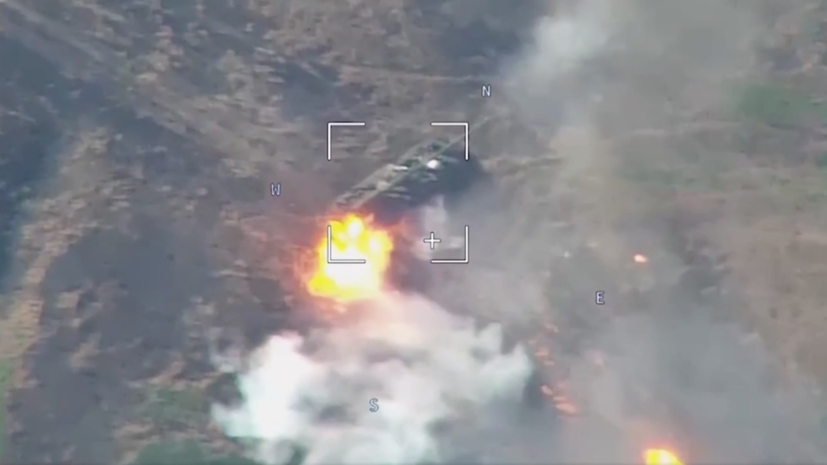 The Russian military during a series of precision strikes on Ukrainian positions destroyed more than 1,000 servicemen of the Armed Forces of Ukraine.

This was announced at a briefing on July 14 by the official representative of the department, Lieutenant-General Igor Konashenkov.

“High-precision strikes in the areas of the settlements of Bereznegovatoe in the Nikolaev region, Konstantinovka and Kramatorsk of the Donetsk People's Republic hit the points of temporary deployment of units of the 35th Marine Brigade, the 54th Mechanized Brigade, the 81st Airmobile Brigade and the 109th Terodefense Brigade.

As a result of the strikes, the total losses of these formations amounted to up to 1,000 personnel and more than 100 pieces of weapons and military equipment,” he said.

In addition, the Russian Aerospace Forces also hit the temporary deployment point of the battalion of the 14th mechanized brigade, which included nationalists and foreign mercenaries, near the town of Chasov Yar.

43 militants were destroyed, about 170 were wounded.

In addition to this, the Russian army aviation launched a strike with high-precision missiles at the temporary deployment point of the 97th battalion of the 60th mechanized brigade of the Armed Forces of Ukraine.

30 nationalists were killed, 37 were wounded.

As stated in the Ministry of Defense of the Russian Federation, against the background of the current situation, conflicts and clashes with the use of weapons have become more frequent among the militants of nationalist formations.

“On July 13, in the 226th nationalist formation “Kraken”, more than 200 militants refused to carry out the order of the command to advance to the Kramatorsk region and announced that they were moving to the Kharkov city’s territorial defense.

During the ensuing fight with the commanders and the ensuing skirmish, six militants were killed, ”Konashenkov said at a briefing.

As Konashenkov stated during the briefing, on the afternoon of July 13, Caliber high-precision sea-based missiles on the territory of a high-voltage equipment plant in the city of Zaporozhye destroyed combat vehicles of the multiple launch rocket system (MLRS) of the 45th artillery brigade of the Armed Forces of Ukraine hidden in hangars.

Along with this, four command posts were destroyed during the day by high-precision weapons of the Russian Aerospace Forces, including the 61st Infantry Jaeger Brigade of the Armed Forces of Ukraine in the Mykolaiv region and the 80th Airborne Assault Brigade in the Kramatorsk region, three ammunition depots in the Soledar and Tatyanovka regions of the Donetsk People's Republic and Nikolaev, as well as a fuel storage for military equipment in the Kharkov region, manpower and military equipment in 21 districts.

During the counter-battery fight, a MLRS battery was destroyed in the Slovyansk region, a MLRS platoon on the territory of the DPR, as well as an artillery platoon of US-made M777 howitzers at firing positions in the Kharkiv region.

Aviation, missile troops and artillery hit 19 command posts, artillery units at firing positions in 78 districts, manpower and military equipment of the Armed Forces of Ukraine in 232 districts in a day.

Centralized power in the liberated territories

In addition, according to a message published on the website of the Ministry of Defense of the Russian Federation on July 14, centralized municipal power has been restored in all settlements of Ukraine controlled by Russian forces.

“Thanks to humanitarian and administrative support in all cities and towns controlled by Russian forces, today centralized municipal government has been restored, food supplies have been established,” the ministry said in a statement.

It is noted that "markets and city services are gradually coming to life."

“Together with the military, people are restoring infrastructure and believe that everything will end soon and the usual peaceful life will return to cities and towns,” the ministry added.