To counter pork price inflation, China plans to dip into its strategic reserves

China plans to dip into its national pork reserves to stabilize meat prices and curb speculation. Last month, the pound of pork soared more than 30% on a… 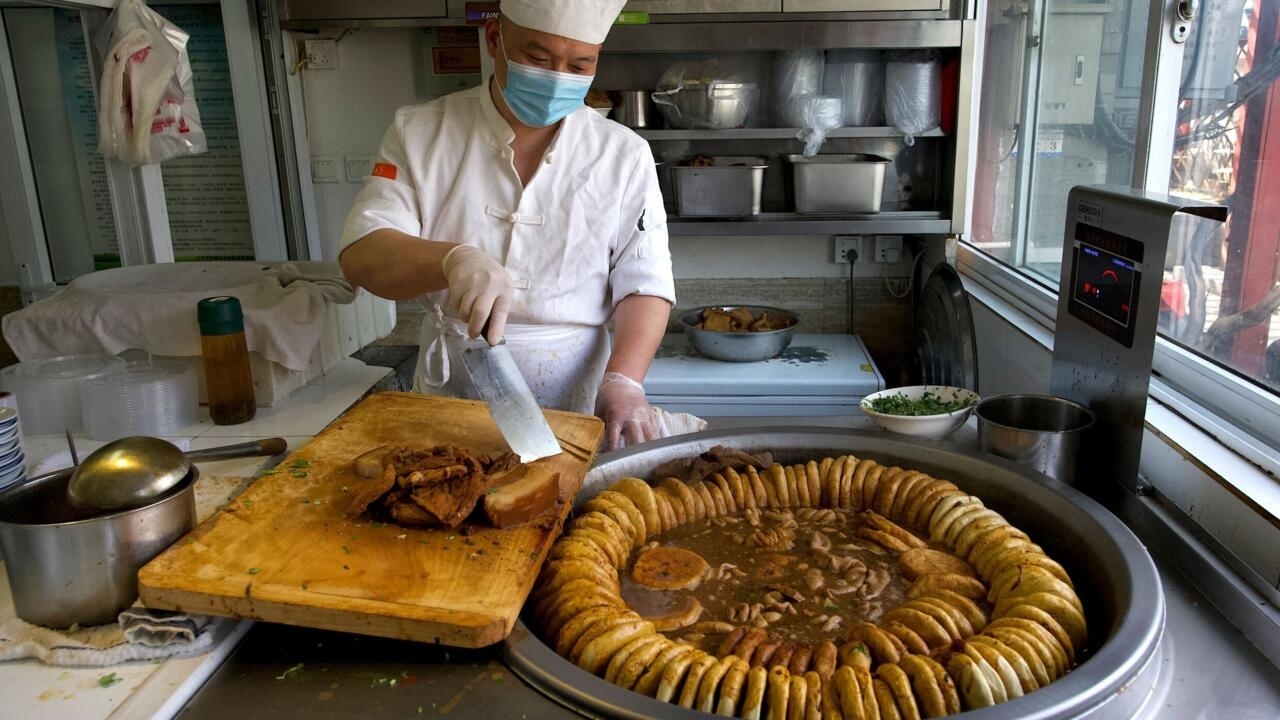 To counter pork price inflation, China plans to dip into its strategic reserves

A cook at a stall selling luzhu, a popular dish of pork stew with bread, in Beijing on April 20, 2022. AFP - NOEL CELIS

China plans to dip into its national pork reserves to stabilize meat prices and curb speculation.

Last month, the pound of pork soared by more than 30% year on year.

Pig is eaten at almost every meal in China.

But in the middle of the afternoon, you have to call the guard to go through the gates of the pig market at the "

" near the 6th and last ring road in Beijing.

A market on the edge of the farms, so to speak… Glass and concrete towers have long occupied the landscape in the northwest of the capital.

Only the crickets, the bright orange fruit-flowers of a Chinese mulberry tree and the signs indicating the presence of harnessed horses remind us that this was once the countryside.

A stilt in a straw hat moves forward in a scooter at the entrance to the wholesale market.

Yes, there are merchants at the back of the courtyard!"

But you will see, the price of pork is very high

he says before disappearing inside.

Due to Covid restrictions, the market only opens for professionals for one hour in the early morning.

The prices have been climbing for four days

At the same time, in the first half of this year, the meat went off at a bargain price, the breeders did not earn anything

Farms have lost money this winter, the subject comes up repeatedly among professionals.

A stool on the sidewalk, a blouse on a hanger hung on a tree branch at the edge of the road, at the end of the day, the itinerant hairdresser and the greengrocers unpack their goods not far from the market.

What do you want,

confides one of them

, the price of meat is increasing all over the world, it's the same in China!

An argument that the authorities do not want to hear.

The National Development Commission is watching this spike in pork prices very closely and has just urged a dozen large pig farmers to cull their herds at a steady pace, warning them against speculation and artificially inflated prices.

In recent days, the price of pork on the market has continued to rise sharply, but it cannot last,

" said Feng Yonghui, author of the

The rise in prices cannot last, in any case, at the rate of the last two weeks, reassures the agronomist.

There are certainly breeders who do not put their pigs on the market to raise prices.

When they have caught up with their arrears, prices will fall

In the same district, 20 minutes by car, the large white hangar of the Qinghe agricultural market.

And here too, butchers include breeders.

When pork was cheap, nobody said anything,

Breeders have gone bankrupt, today they are catching up, that's all.

For customers, however, the surge in prices remains difficult to follow and explain.

We have lost all our bearings, the prices change all the time

Why are the prices rising so much

Pork prices are at a turning point, they will probably bottom out and usher in a new upward cycle, which will put strong pressure on the consumer price index

," Yang Weimin said in late June. deputy director of the economic affairs committee of the Chinese People's Consultative Conference, in remarks reported by the

Chinese leaders worried in the spring about the

consequences of the war in Ukraine

and the Covid resurgence which created “

If the warning of breeders is not enough, the authorities are considering drawing on national reserves.

Parked in front of the market, a truck bears a sticker of the 70ᵉ anniversary of the Chinese Communist Party.

It was in 2019, an epidemic of swine fever had just decimated the farms and the power had then already drawn on its strategic reserves to prevent any manifestation of discontent on the eve of the celebrations.

A similar scenario is being considered ahead of the 20th CPC Congress in the fall.