The European Parliament is due to vote on Wednesday July 6 on whether or not nuclear and gas should be included in the European green taxonomy - i.e. new taxation rules supposed to favor… 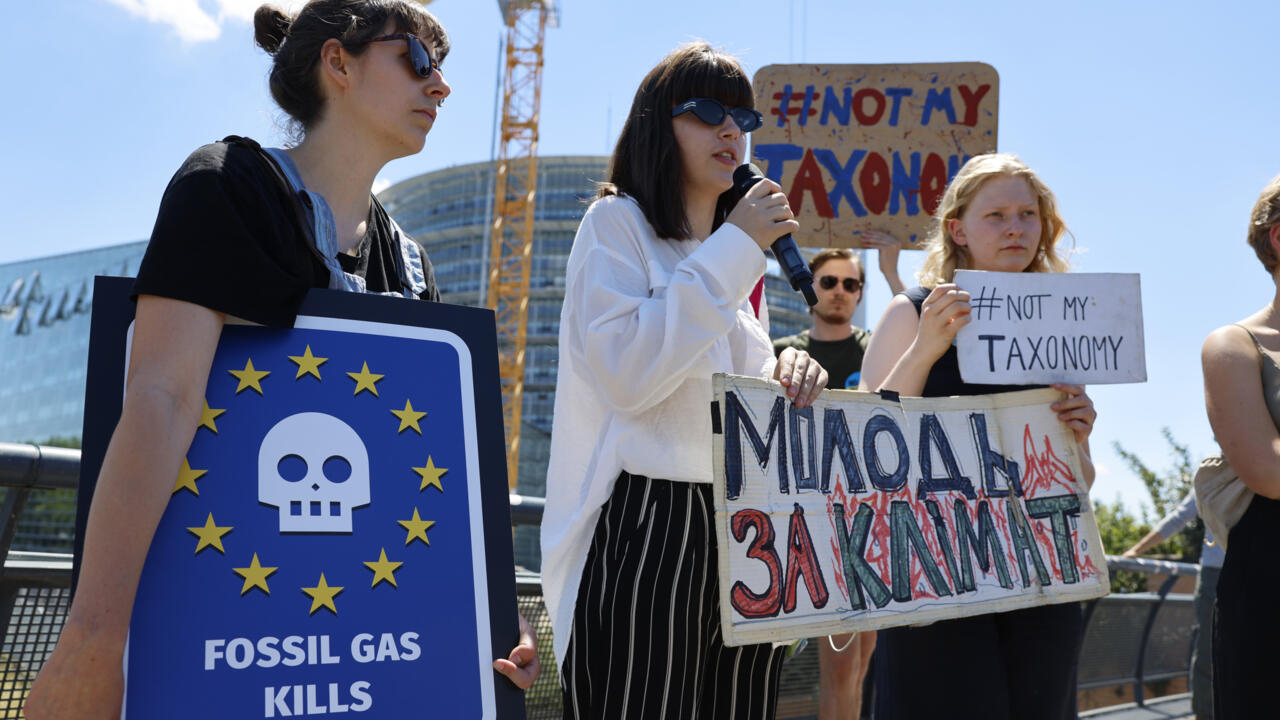 While MEPs must decide whether or not to include gas and nuclear among the list of renewable energies to be taxed favorably, protesters for or against inclusion gathered outside the European Parliament, here on July 5, 2022 in Strasbourg.

The European Parliament must decide on Wednesday July 6 on the inclusion or not of nuclear power and gas on the European green taxonomy - i.e. new taxation rules supposed to promote green energies and ecological transition.

On June 14, two commissions refused to include gas and nuclear activities on the list of sustainable economic activities, to the dismay of Paris, which intends to turn even more to nuclear power.

With our special correspondent in Strasbourg,

Three weeks ago, a first vote surprised many MEPs:

after an adoption in December

, two committees of MEPs then rejected the inclusion of nuclear power and gas in the green taxonomy.

These same deputies will again vote on this file, during a final vote on Wednesday, in plenary session.

The result promises to be very tight and could ultimately lean towards the inclusion of certain gas and nuclear activities in the list of energies taxed as green, according to rumors in the European hemicycle.

This was due to intense lobbying and pressure exerted by different members of the European Union (EU).

If this materializes, it would be a decision that would go against the recommendations of two European commissions: that of the Economy and that of the Environment.

Moreover, as many MEPs denounce, this could be interpreted as aid to Russia, which not only remains

the main supplier of gas

, but which is also one of the sources of supply of nuclear fuel.

This is a major problem in the context of the war in Ukraine.

According to MEP David Cormand, member of the Europe Écologie-les Verts formation, “

French lobbies and diplomacy have forced their hand in recent weeks to include, among green energies, two energies that are not

"Continuing to make a green taxonomy of gas and nuclear is not coherent means financing Putin", according to David Cormand

This vote will be closely scrutinized.

wants to put in place.

While deputies must decide in plenary session, outside, pro or anti-nuclear activists have multiplied since Tuesday the demonstrations in front of and around the parliament, in Strasbourg.

With our correspondent in Strasbourg,

MEPs are very divided on the issue: the Ukrainian crisis and the rise in the price of electricity have changed public opinion.

The majority, ie 353 votes, is therefore far from certain.

So Greenpeace, the Friends of the Earth and their European equivalents multiplied their actions to put pressure on the deputies with a demonstration, an intrusion into the European parliament or a swim in the river which runs alongside this same parliament and a single cry: no gas or nuclear.

They can, by rejecting the inclusion of nuclear and gas in the taxonomy, give every chance for renewable development and energy savings, which are the fastest and least expensive solution

Opposite, the Voice of Nuclear association has only a few banners and a polar bear as a mascot.

But his speech no longer leaves anyone indifferent: nuclear power is decarbonized, i.e. a clean energy which is a tool to fight against the climate emergency.

Myrto Tripathi, former employee of Areva and president of the Voices of Nuclear association: “

We have the Netherlands which is starting to call, with its wishes and in an extremely strong way, for more nuclear power.

And we feel that things are moving in Belgium, in France, and we need to rely more on nuclear power, which is today the first low-carbon energy in Europe.

In Strasbourg, demonstrations for and against the classification of nuclear among green energies in the EU