Johnson faces a wave of resignations .. Is the end approaching?

No one wishes to be in the place of British Prime Minister Boris Johnson these days, as he is receiving one political setback after another, the last of which is a wave of resignations that is almost engulfing his government. 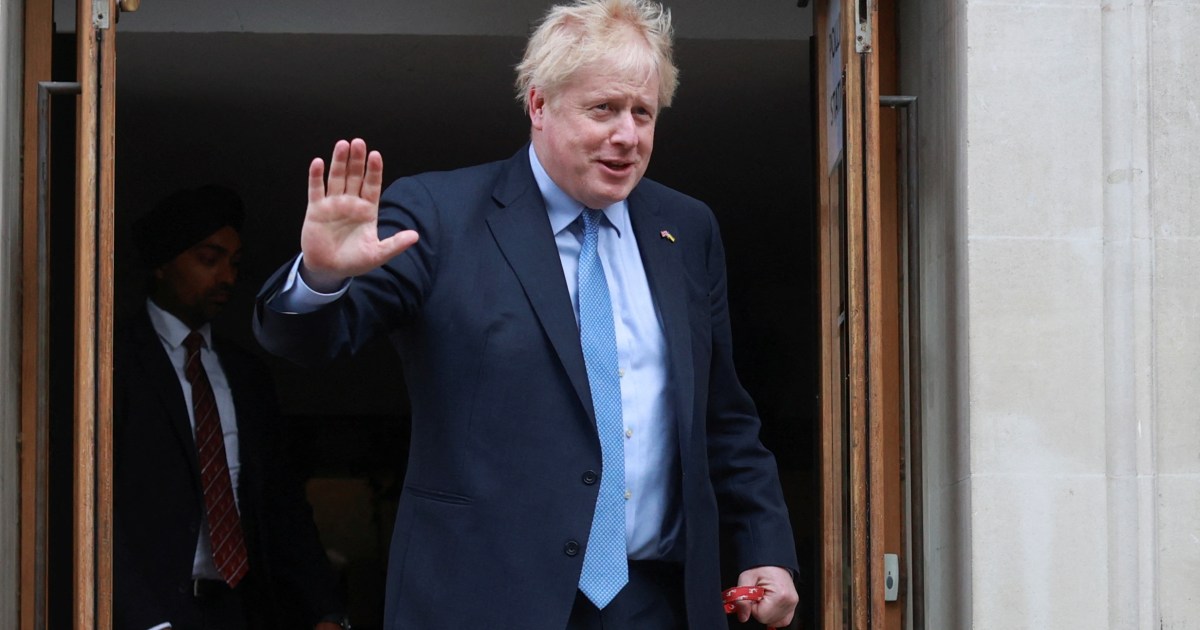 - No one wishes to be in the place of British Prime Minister Boris Johnson these days, as he receives one political setback after another, which puts his political fate on the line, and every time he miraculously survives, but with visible losses, the most important of which is the decline in his popularity on the British street and within his party.

Johnson was surprised to put two heavy-handed resignations on his desk, the first for Health Minister Sajid Javid, and the second for Treasury Secretary Richie Sunak, both of which were announced simultaneously.

And both of the resigned ministers have a place within the Conservative Party, which increases the pressure on Boris Johnson, especially since the two ministers expressed angry positions that were not expressed by even the most vocal opponents of Johnson's government.

Both Sunak and Sajid accused Johnson's government of not acting in the interest of the country, lacking integrity and responsibility, and not living up to the aspirations of the British people.

What is the cause of all this anger at two senior British government ministers who until recently were Johnson's close men?

And because misfortunes do not come singly, five important figures in Johnson’s government resigned this morning: Minister in the British Home Office Victoria Atkins, Minister in the Treasury John Glenn, who said in his resignation letter that “the country deserves better,” and Schools Minister Robin Walker, Ministerial Assistant to the Department of Business and Energy, Felicity Lucan, and Conservative MP Robert Halfon.

Boris Johnson found himself compelled on Tuesday morning to apologize again to the British for another grave mistake he made, which was his appointment of MP Chris Pincher to the position of Deputy Disciplinary Officer in the Conservative Party, who oversees the discipline of MPs in voting on decisions and supporting the government in Parliament.

Press investigations showed Pincher’s involvement in moral scandals since 2017, and after the charges against him escalated, he was forced to resign from his party and parliamentary positions at the beginning of this month, but the dilemma is Johnson’s announcement at first that he was not aware of the charges against the parliamentarian, before new press investigations appeared. That Johnson was aware of all the moral charges against Chris Pincher and yet appointed him to an important position within the Conservative Party.

Then he fell into the hands of Boris Johnson, who admitted that he had made a wrong decision and apologized to the British, but political statements and leaks said that Johnson was keen to appoint Chris Pincher as deputy leader of the Conservative Party because of his absolute loyalty to Johnson.

Is the end near?

Most British political estimates point that Boris Johnson is not the person who resigns because of the resignation of two ministers from his government.

In this case, the Conservative Party will have no choice but to dismiss Boris Johnson, after the failed attempt last June to impeach, which failed after he won the confidence of less than two-thirds of his party's MPs.

Johnson was hoping that the no-confidence paper would fall, because the party's laws stipulate that this mechanism is activated only once a year, and therefore he will have until next summer, when the party will enter into preparations for the general parliamentary elections.

But the bad news does not come alone. Over the next week, the Conservative Party will witness the re-election of the 1922 Committee, which is the committee responsible for activating the recall mechanism, and it is expected that those who will hold the committee this time are Johnson's opponents.

This committee has the power to amend laws, and call for a new no-confidence process, at which time Boris Johnson may find it very difficult to mobilize support. During the previous vote, only 32 votes saved him from falling, and these votes may have shifted to the camp supporting his removal from office.

There is a prevailing doctrine within the Conservative Party, which is interests. Boris Johnson built his glory as the architect of Brexit, and he is the godfather of the historical majority that the party obtained in the 2019 elections. However, all these cards began to erode, starting with Brexit and its endless troubles with the decline in the party’s popularity and loss. Seats that have owed allegiance to him for decades.

Alone in the face of everyone

Hardly a week or a month passes without the British government and the Conservative Party witnessing a heavy-handed resignation, in protest against Boris Johnson’s policies or his behavior, starting with the scandals organizing parties at the Prime Minister’s headquarters during the general closure that the country was witnessing due to the Corona epidemic, passing through his desire to Changing the criteria that compel officials to resign if they violate them, then the stage of withdrawing confidence from which he miraculously escaped, leading to the appointment of those close to him to senior positions despite his knowledge of the moral charges against them.

According to the newspaper "The Guardian", the general mood within the Conservative Party has turned against Boris Johnson, and it seems that there is a general tendency to get rid of Johnson after he became, in the eyes of his party's deputies, a threat to the future of the party.

Currently, none of the senior leaders of the Conservative Party express their support for Boris Johnson, with the exception of some of his government ministers who see that Johnson's departure means their departure as well and their disappearance from the scene forever, after Boris Johnson raised them to positions they may not have expected to reach.