China News Service, July 6th (Meng Xiangjun) On July 4th, local time, the United States ushered in the Independence Day anniversary. A parade celebration is being held in downtown Highland Park, Illinois, USA.   "Bang bang bang", suddenly, a strange sound came. At first, people thought that it was the sound of fireworks at the Independence Day celebration. Soon after, it was discovered that it 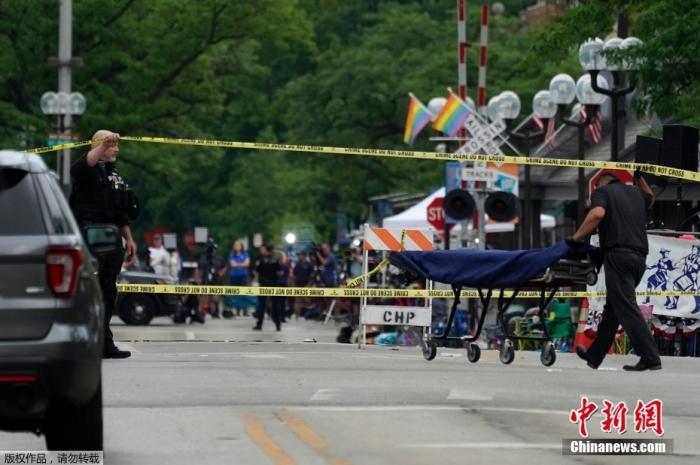 A parade celebration is being held in downtown Highland Park, Illinois, USA.

"Bang bang bang", suddenly, a strange sound came. At first, people thought that it was the sound of fireworks at the Independence Day celebration.

Soon after, it was discovered that it was not fireworks, but - the sound of deadly gunfire.

More than 20 shots were heard.

One second, he was waving the American flag to greet the crowd in the parade, and the next second he exclaimed.

The team broke up, people fled the streets in search of makeshift shelters, and the scene was a mess.

On July 4, local time, in Highland Park, Illinois, the United States, the "Independence Day" parade was suddenly shot, and the scene of the accident was blocked.

Soon, many people were shot and fell to the ground.

[The gunman "randomly shot" from the roof]

U.S. media reported that at least four children were among the dead and injured, and the injured were between the ages of 8 and 85.

In addition, a senior Mexican foreign ministry official said on social media that at least one of the victims was a Mexican citizen.

Whoever the target was, was brutally murdered. Who carried out this bloody mass shooting?

Highland Park police announced that Robert E. Crimo III, 22, has been arrested as the only suspect in the case.

Image source: Screenshot of the post by the Highland Park Police Department

Police said the suspect, Cremo, fled in a 2010 silver Honda, breaking a police stop at one point.

Police pursued him and eventually caught him in a woodland area.

According to the police, at the time of the incident, the gunman, armed with a high-destructive rifle, climbed to the roof of a store through a ladder in the alley, and "randomly fired" at the crowd participating and watching the parade.

Several US media reported that Cremo owned at least 4 legally purchased firearms, including:

US media revealed that Cremo is the second of three children in the family, has Italian descent, and is known as the "awakening rapper".

Why he chose to take a road of no return and attack innocent people is under investigation by the police.

["The Most Patriotic Day" is now a tragedy]

The shooting is the 308th mass shooting in the U.S. so far in 2022, according to statistics from the nonprofit U.S. Gun Violence Archive.

A woman was crying at the scene after the incident.

In fact, there were 11 mass shootings in the US in the first 4 days of July alone.

Just halfway through the year, more than 22,000 people in the U.S. have lost their lives.

And this latest tragedy happened on America's "most patriotic day" -- Independence Day, July 4.

This anniversary was established by Americans to celebrate the abandonment of British rule by the original 13 colonies, the establishment of the United States, and the publication of the Declaration of Independence.

US President Joe Biden once said, "July 4th is a holy day for our country".

"We are the only people on earth founded on one thought, that all men are created equal."

The shadow of reality soon shrouded.

After the shooting, Biden said on social media that he and his wife Jill were "shocked" by the incident.

He said he "will not give up fighting the 'epidemic' of gun violence."

Like his colleagues, the Democratic Party's Biden has always been at odds with the position of his political opponent, the Republican Party, on gun control issues.

On June 23, the U.S. Supreme Court overturned a law in New York state restricting the "concealed carrying" of guns in public, amid a majority of Republican-backed conservative judges and dissenting liberal judges.

The reasoning is that the law violates the Constitution's Second Amendment right to "keep and bear arms".

American public opinion was in an uproar.

New York City Mayor Adams warned that once it becomes easier to carry firearms in New York City with a population of more than 8 million, violence will inevitably escalate. "This decision makes each of us not immune to gun violence."

On the other hand, on the same day, the U.S. Senate passed a historic gun control bill.

The bill mandates stricter background checks for gun buyers between the ages of 18 and 21; makes it easier for law enforcement officers to confiscate firearms from "dangerous" people, among other things.

The bill marks the first time in nearly 30 years that the Democratic and Republican parties have made a breakthrough on gun control.

The bill was subsequently signed into law by President Biden.

On June 11, local time, a nationwide protest against gun violence took place in the United States.

Analysts believe that this bill was finally passed because the anger of the American people has completely overwhelmed the differences among politicians.

The daily casualties and panic have become unbearable for the American people.

In many parts of the United States, tens of thousands of people held anti-gun violence rallies, chanting gun control slogans and urging the government to act.

Sadly, however, the bill limits the age of gun control to 21 and under, and the suspect in the Highland Park shooting was 22.

["America's Heart Has an Arrow"]

"It will be futile to completely ban guns in the United States," said Carter, director of the Institute for Gun Injury Prevention at the School of Public Health at the University of Michigan. This is because the gun culture in American society is deeply ingrained.

He analyzed that gun violence in the United States has intensified, and social security has continued to deteriorate, making people feel that only "buying a gun for self-defense" is safe.

This vicious circle will only cause the entire American society to endanger itself, and the guns will increase.

On May 26, local time, in Uvalde, Texas, people mourn the victims of the elementary school shooting.

"People have found that there is an arrow in the heart of America." The Chinese website of the New York Times previously cited as an example that 19 elementary school students and two teachers were shot and killed in an elementary school in Uvalde, United States, as well as a white supremacist gunman The 'poisoned arrow' was exposed in a Buffalo supermarket that killed 10 people.

It also cites several things as evidence that "other arrows have also been integrated into [Americans'] daily life."

Data map: Staff at the nucleic acid testing site prepare for work in a tent in Puyalup, Washington, USA.

For example, the new crown virus has become the third leading cause of death in the United States.

Even though the United States is one of the most medically advanced countries in the world and has a surplus of vaccines, more than 1 million people have died from the new crown.

For example, the increase in drug abuse deaths, combined with the new crown, has caused overall American life expectancy to fall to its lowest level since World War II.

For example, police killings of unarmed African-American men continue after the United States vowed to reform.

The New York Times finally threw a series of questions.

It pointed out that in the face of mountain-like disasters, Americans have "increased tolerance for various acts of terror?"

"How much do we value the value of a life?"