Last Saturday, Libyan leaders found themselves under growing pressure from the street, in the wake of demonstrations across the country due to chronic power outages in the middle of a heat wave, at a time when they were unable to settle their political differences. On Saturday, it seemed that calm had returned to Tobruk in a 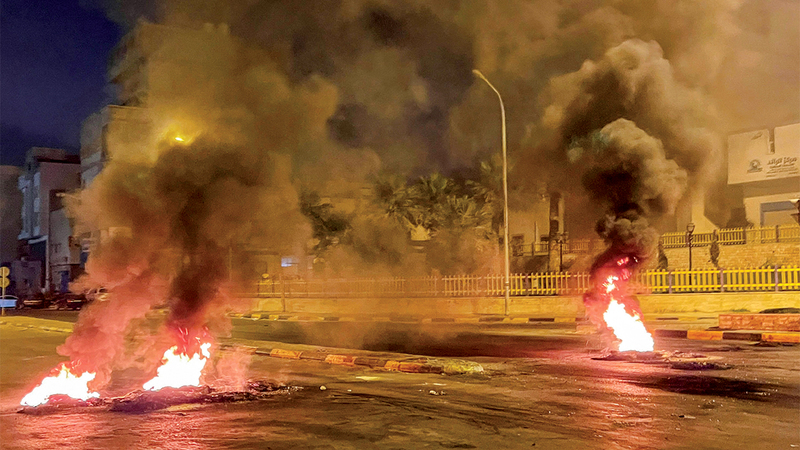 The country imports almost all of its food

Last Saturday, Libyan leaders found themselves under growing pressure from the street, in the wake of nationwide demonstrations over chronic power cuts in the middle of a heat wave, at a time when they were unable to resolve their political differences.

On Saturday, it seemed that calm had returned to Tobruk in the far east of the country, where demonstrators stormed the parliament headquarters on Friday, using a bulldozer, before setting fire to the place to protest the deteriorating conditions of life and the neglect of their leaders, but calls on the Internet were issued to participate in protest movements at night.

The demonstrators, some of whom raised the green flag of the former regime led by Muammar Gaddafi, expressed their anger at the neglect of officials, and the deterioration of living conditions in a country with the largest oil reserves in Africa.

A parliamentary source told AFP that the council had asked the Public Prosecution Office to open an "immediate investigation" into the violence in Tobruk.

The Parliament of Tobruk is one of the symbols of the division in Libya, between the Cyrenaica camp (in the east) led by the Commander-in-Chief of the Libyan Armed Forces, Field Marshal Khalifa Haftar, and a government based in Tripoli (west) headed since 2021 by Abdel Hamid al-Dabaiba.

On Saturday evening, the Libyan armed forces, led by Haftar, confirmed in a statement the follow-up to “the leadership of the popular movement, which expresses legitimate demands, and we declare our stand and our full alignment with the will of the people, and our support for the demands of the citizens.”

"The armed forces will not fail the people, and will not leave them vulnerable to blackmail and tampering, and it is our duty to protect them," she added.

We wish our youth and people to preserve public property, and we call on them to organize their legitimate demonstration for an organized peaceful civil movement, to lay out a roadmap for salvation from the bitter reality.”

United Nations Secretary-General Antonio Guterres called on "all parties to refrain from any actions that undermine stability," urging them to "work together to overcome the ongoing political impasse," according to his spokesman, Stephane Dujarric.

For his part, the US ambassador to Libya wrote on Twitter, “It is clear that no single political entity has legitimate control across the country.

Any effort to impose a unilateral solution will lead to violence.

Only dialogue and settlement between the main actors will determine the path to elections and political stability.”

While no mass gathering was organized on Saturday, demonstrators blocked roads in the coastal city of Misurata (west), a day after they vandalized and set fire to the headquarters of the Municipal Council, according to a local journalist.

And on Saturday after dark, demonstrators gathered at several points in Tripoli, blocking roads and burning tires, according to pictures broadcast by the local media.

On Friday, thousands took to the roads, from the cradle of the 2011 revolution in Benghazi (in the east), to the capital, Tripoli, in the west, passing through the eastern cities of Tobruk and Al-Bayda.

In Sabha, in the south, demonstrators officially burned a building, according to scenes broadcast by the media.

"We want electricity," the demonstrators chanted, referring to power outages that last 12 hours a day, or up to 18 hours on extremely hot days.

Analyst specializing in Libyan affairs, Jalal Harchaoui, said that for more than a year, most diplomatic and mediation efforts related to Libya focused on the concept of elections, which "will not take place for at least two years, given the failure of negotiations in Geneva on Thursday under the auspices of the United Nations."

Harchaoui stressed that the economy "should have been the real priority for everyone."

"On this front, the year 2022 was very painful for Libyans for several reasons," he added, noting that "Libya imports almost all of its food, and the war in Ukraine has affected consumer prices, as in many countries in the region."

The country's main energy sector, which allowed funding for the welfare state under former leader Muammar Gaddafi, who was killed during the 2011 revolution, has been a side victim of political divisions since mid-April, with a wave of forced closures of oil sites as a result of the confrontation between two rival governments.

The National Oil Corporation announced last Thursday that the closure of oil facilities leads to a decline in gas production, which is necessary to supply the electricity grid.

In 11 years, the country witnessed the formation of dozens of governments, two civil wars, and it did not manage to organize presidential elections.

In addition to the power cuts, Libyans are living with a shortage of cash and fuel, while the service sector is deteriorating and the infrastructure is poor.

“In the east as well as in the west, militias carry out massive smuggling operations that lead to a serious shortage of fuel for ordinary citizens,” Harchaoui said.

Also, there is kleptocratic rule and systemic corruption in the East, as in the West.”

The United Nations envoy to Libya, Stephanie Williams, who is sponsoring a faltering political process, described the sabotage of Parliament as "unacceptable", calling on all parties to exercise "restraint".

And she said in a tweet on Twitter, "The right of the people to peaceful protest should be respected and protected, but riots and vandalism, such as storming the parliament headquarters late (Friday) in Tobruk, are totally unacceptable."

She stressed the urgent need to "maintain calm, and the Libyan leadership to deal responsibly with the protests, and for everyone to exercise self-restraint."

For his part, Dabaiba tweeted, “I add my voice to citizens across the country.

All bodies must leave, including the government, and there is no way to do that except through elections.

The parties obstructing the elections are known to the Libyan people.”

The European Union ambassador to Libya, Jose Sabatel, said that the demonstrations "confirm that people want change through elections, and their voices must be heard."

In 11 years, the country witnessed the formation of dozens of governments, two civil wars, and it did not manage to organize presidential elections.

In addition to the power cuts, Libyans are living with a shortage of cash and fuel, while the service sector is deteriorating and the infrastructure is poor.