On the initiative of President Taboun, Mahmoud Abbas meets with Ismail Haniyeh in Algeria

Algerian President Abdel Majid Tebboune held - on Tuesday evening - a meeting that brought together Palestinian President Mahmoud Abbas with a delegation from the Islamic Resistance Movement (Hamas), led by the head of its political bureau, Ismail Haniyeh. 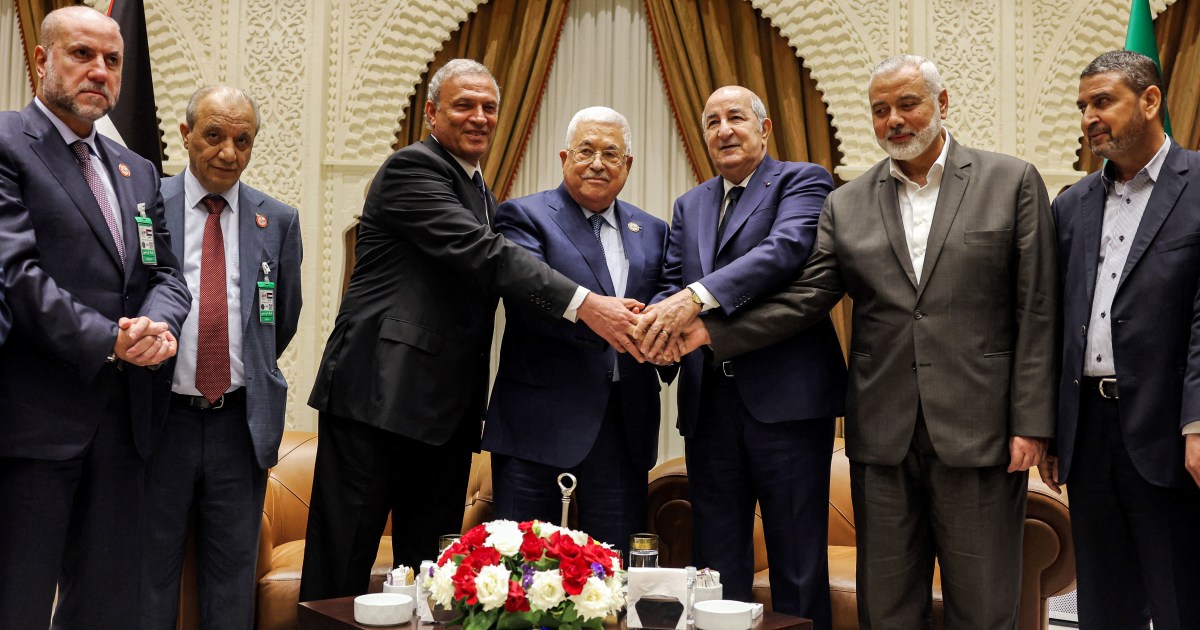 Algerian President Abdel Majid Taboun held - on Tuesday evening - a meeting that brought together Palestinian President Mahmoud Abbas with a delegation from the Islamic Resistance Movement (Hamas), led by the head of its political bureau, Ismail Haniyeh.

According to the official Algerian television, the meeting was held at the Palais des Congrès, west of the capital, Algiers, on the sidelines of the Palestinian delegation's participation in the celebrations of the sixtieth anniversary of the country's independence from France on July 5, 1962.

The television broadcast scenes in which Abbas, Haniyeh and the rest of the leaders appear in one session, with President Tebboune in the middle.

Algerian television did not report the content of the meeting, which it described as "historic".

Palestine has been divided since the summer of 2007, when the national unity government collapsed and "Hamas" took control of the Gaza Strip, in light of differences that still exist with the Palestinian National Liberation Movement (Fatah), led by President Abbas.

For its part, the Palestinian News Agency reported that Abbas discussed with Tebboune ways to enhance bilateral relations between the two countries and the two brotherly peoples, in addition to many international and regional issues of common interest.

She explained in a statement that the meeting was attended by several Palestinian officials, including the head of the Hamas political bureau, Ismail Haniyeh.

While Hamas said in a brief statement on its website, that President Tebboune received "the mujahid brother Ismail Haniyeh, head of the Hamas political bureau, and President Mahmoud Abbas, the president of the Palestinian Authority, in a brotherly meeting" on the sidelines of Algeria's independence anniversary celebrations.

Months ago, Algeria launched mediation efforts for reconciliation between the various Palestinian factions, in preparation for a conference prior to the Arab summit scheduled in Algeria next November.

Abbas visited Algeria in December 2021, and the two sides announced at the time an agreement for Algeria to host a conference for Palestinian reconciliation that precedes the Arab summit.

After Abbas's visit, delegations from the Palestinian factions visited to discuss the reconciliation file, and the Algerian authorities confirmed that they aimed to listen to the proposals and perceptions of each party regarding the file.