Finland and Sweden have one foot in NATO, will Turkey stop it? 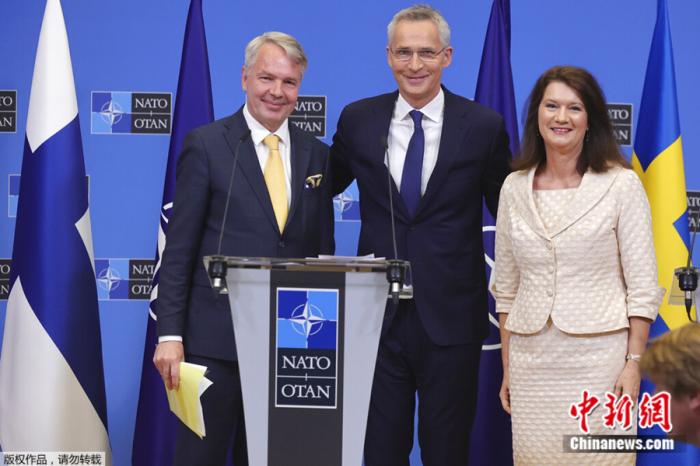 On the 4th, NATO announced that Finland and Sweden have completed the "accession" negotiations, which means that the two countries have officially confirmed, willing and able to fulfill the political, legal and military obligations of NATO member states.

Now, how far are Finland and Sweden from becoming NATO members?

"One foot into NATO"

Signing the Protocol of Accession is one of the processes for "new members" to join NATO.

After the signing of the protocol, Finland and Sweden can be said to have "one foot into NATO".

At present, Finland and Sweden have gone through several major steps of submitting the application letter, completing the "accession" negotiation, being formally invited by NATO leaders and signing the accession protocol.

But this is not the end.

The Protocol is actually a supplement to the Washington Treaty, which, when signed and ratified, will become part of the NATO Treaty, which regulates its Treaty through the Protocol.

This step is usually more difficult.

Because the protocol must be ratified by "new members" and all NATO member states, it takes a long time.

Take North Macedonia, which previously joined NATO, as an example. In February 2019, the country signed a protocol with NATO, but did not formally join until March 2020.

After all NATO member states have accepted the "new member" accession protocol, the "new member" can join NATO in accordance with their own procedures, and submit an instrument of accession to the US State Department to formally become a member of NATO.

Will Turkey be a hindrance again?

Although Finland and Sweden have previously cooperated with NATO to a high degree, and in the context of the conflict between Russia and Ukraine, the process of "joining the treaty" between the two countries may be accelerated, but it is far from smooth sailing.

Turkey, the military power in NATO, has been one of the uncertainties.

Back in May, Turkish President Recep Tayyip Erdogan said he would not agree to join NATO with Finland and Sweden.

In the following month or so, the Turkish side has repeatedly stressed that Finland and Sweden must stop supporting the PKK and others when seeking to join NATO, and lift restrictions on Turkish exports of defense equipment.

Things didn't turn around until the day before the NATO summit: Finland, Sweden and Turkey signed a tripartite memorandum, and Turkey confirmed its support for Finland and Sweden to join NATO.

However, even so, after the NATO summit, Turkey did not forget to "beat" the Nordic countries at all times, reminding the latter that they must abide by the agreement, otherwise, Turkey can still stop it.

What is the attitude of Russia and Ukraine?

When Finland and Sweden revealed their intention to join the treaty, Russia said that it would not remain indifferent, but would not make an impulsive decision on countermeasures, but would "comprehensively analyze the deployment of new forces formed by the new round of NATO expansion."

Regarding the "entry into the treaty" between the two Nordic countries, Putin said that Russia's relations with Sweden and Finland do not have the same problems as Ukraine. "If you want to join, please do so."

Finland and Russia have a long border of more than 1,300 kilometers. Once they join NATO, the sphere of influence of NATO can be directly extended to the northwestern border of Russia.

If NATO deploys military infrastructure here, then Russia "will be forced to respond symmetrically."

This move by NATO does not seem to please Ukraine either.

Recently, Ukraine, which has written NATO membership as a basic policy in its constitution, has repeatedly complained that NATO has not made a gesture to support Ukraine's membership.

Ukrainian President Volodymyr Zelensky directly stated at the NATO summit that he hoped that all parties would adhere to the "open door policy" on Ukraine's "joining" issue, respect Ukraine's security demands, and find a place for Ukraine in a common security space.

What do you think of NATO led by the United States?

The United States expressed "full support" for the participation of Finland and Sweden.

U.S. President Biden also made a consistent statement, saying that the purpose of NATO is defense.

The addition of Finland and Sweden would make NATO stronger.

A strong, united NATO is also the foundation of American national security.

However, the two Nordic countries proposed to join NATO out of security concerns, but Biden was able to interpret the move from "strengthening NATO" to "US national security", which seems to imply the logic of NATO's existence.

Biden even stated in advance that he would submit a report on the joining of Finland and Sweden to NATO to the US Congress so that Congress could quickly pass the relevant procedures at that time.

Such eagerness is similar to the "open arms" gesture of the NATO Secretary General.

The U.S. is ahead, and other NATO members have also welcomed Finland and Sweden.

The German foreign minister has stated that the German federal government has made all preparations for the rapid approval of the accession of the two countries.

NATO, France and the United States have also said they will ensure the safety of the Nordic countries during the "transition period".

"This is a good day for Finland and Sweden, and a good day for NATO," the NATO secretary general told reporters in a joint press statement with the Swedish and Finnish foreign ministers after the signing of the accession protocol. For both Russia and Ukraine, what does it mean for NATO to expand again to the current world?