American perception: how the US is trying to convince China to change its position on the situation in Ukraine

US Ambassador to China Nicholas Burns demanded that Beijing stop blaming NATO for the conflict in Ukraine, as this position is allegedly "Russian propaganda." In turn, Russian Ambassador to China Andrey Denisov thanked the PRC for a balanced and balanced approach to the Ukrainian issue. Earlier, Chinese President Xi Jinping, in a telephone conversation with Vladimir Putin, said that Beijing takes an independent position on the situation around Ukraine. Experts note that the United States is trying to force China to accept an exclusively American perception of what is happening in the world. 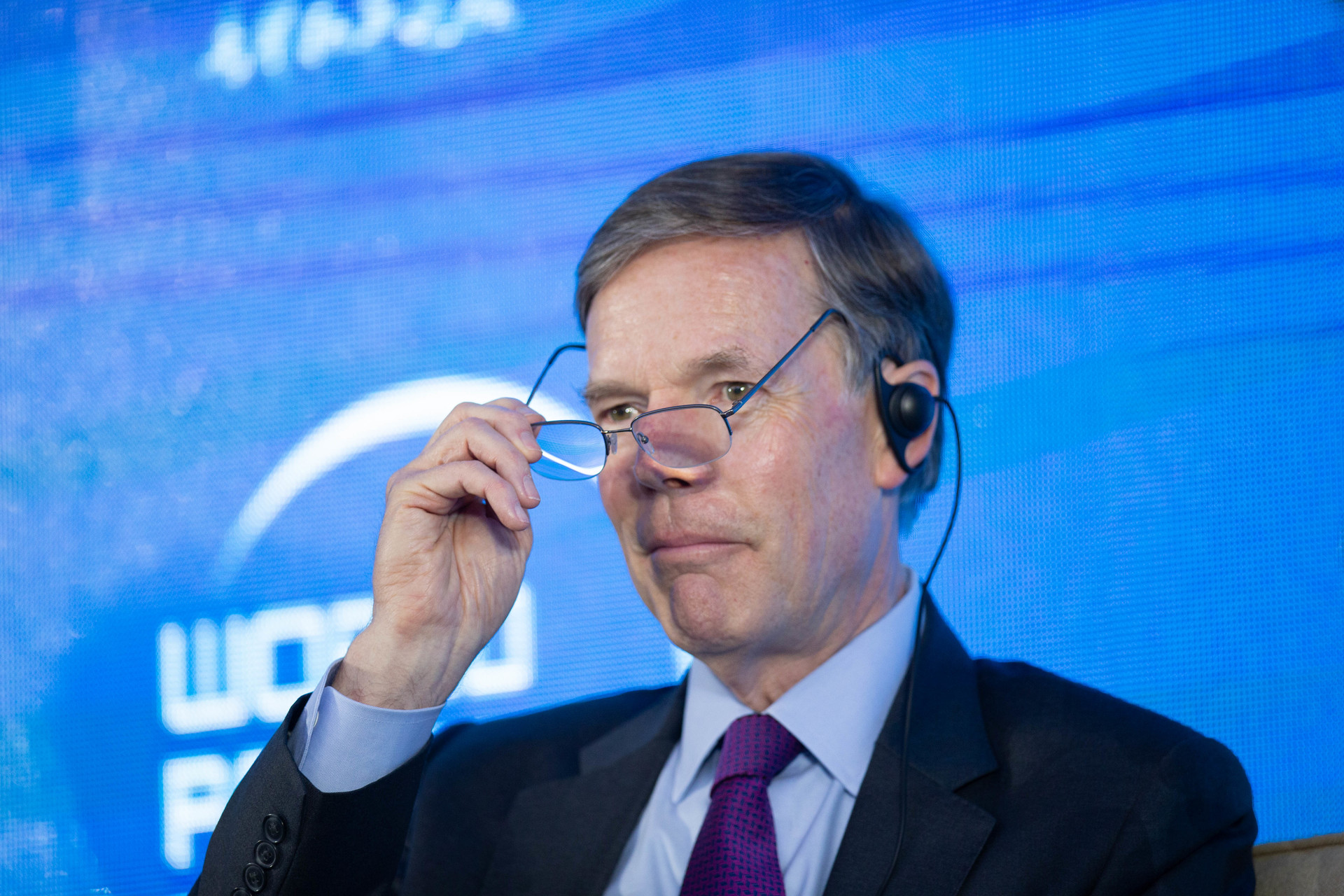 US Ambassador to China Nicholas Burns demanded that official Beijing stop blaming NATO for the situation around Ukraine, since this point of view is allegedly pro-Russian.

Burns made this statement at a forum at Tsinghua University.

“I would like to hope that Chinese Foreign Ministry officials will stop condemning NATO for starting this war.

This is Russian propaganda.

I hope that official representatives of the Ministry of Foreign Affairs (PRC. -

) will also stop spreading lies about American laboratories for the production of biological weapons, which do not exist in Ukraine.

Unfortunately, China picked it up, ”the Bloomberg agency quotes the diplomat as saying.

He spoke before the American diplomat and thanked Beijing for a balanced and balanced approach to the Ukrainian problem.

Denisov also expressed hope that "China can send a signal to our Ukrainian neighbors about the need to have a more realistic approach to assessing the situation."

Recall that Chinese President Xi Jinping said earlier that Beijing takes an independent position on the Ukrainian issue and takes into account the facts and historical realities.

He said this in a telephone conversation with Russian President Vladimir Putin, which took place in mid-June.

The Kremlin, in turn, said that the Chinese leader noted the legitimacy of Moscow's actions after Vladimir Putin "outlined his fundamental assessments regarding the situation in Ukraine and the tasks being solved during the special military operation."

“The President of the People's Republic of China noted the legitimacy of the actions taken by Russia to protect the fundamental national interests in the face of challenges to its security created by external forces,” the Kremlin said in a statement.

Moscow also emphasized that "Russia and China, as before, act from a common or very close position, consistently uphold the fundamental principles of international law, and seek to build a truly multipolar and fair system of international relations."

The United States and other Western countries have repeatedly tried to get Beijing to change its position on the situation around Ukraine and condemn the Russian special operation.

So, at the recent G7 summit in Germany, its participants called on Beijing to use its influence on Moscow to stop the ongoing special operation.

In addition, in their communiqué following the summit, the G7 countries also criticized China for "human rights violations", "market interventions" and actions in the South China Sea.

In response, the Chinese Foreign Ministry rejected the criticism of the group and said that the G7 countries do not have the authority to speak on behalf of the entire world community.

“The G7 countries account for only 10% of the world population.

They have no right to represent the whole world or to believe that their values ​​and standards apply to the whole world,” said Chinese Foreign Ministry spokesman Zhao Lijian.

It is worth noting that this is not the first time that the G7 countries have made statements on the issue of Ukraine addressed to Beijing.

Earlier, at the May summit, the countries of the group stated that China should not help Moscow and circumvent the sanctions imposed against the Russian Federation after the start of the special operation.

The Chinese Foreign Ministry then once again recalled the country's independent position and called such calls inappropriate.

Zhao Lijian stressed that sanctions are not capable of resolving the conflict, and Beijing expects other political solutions to the situation around Ukraine from the G7.

Earlier, the Russian Foreign Ministry warned that Western countries are trying to find "gaps" in relations between Russia and China in order to undermine the strategic partnership between the two countries.

This was announced by Georgy Zinoviev, Director of the First Asia Department of the Russian Foreign Ministry.

“We fix the focus of the Westerners on finding gaps that, in their opinion, can undermine the strategic partnership between Moscow and Beijing.

Naturally, we see these attempts and understand them well.

Together with our Chinese friends, we will neutralize the relevant efforts,” the diplomat said at a meeting of the parliamentary group for relations with the Chinese parliament in the State Duma.

A similar point of view was expressed in China.

For example, the CCP's English-language newspaper Global Times said in March that Washington was seeking to use the situation around Ukraine to drive a wedge between Beijing and Moscow.

At the same time, the publication noted that calls from the United States and other Western countries to influence the Russian Federation are meaningless, since Russia is an independent major power.

According to the head of the sector of economics and politics of China, the Institute of World Economy and International Relations.

Primakov of the Russian Academy of Sciences Sergey Lukonin, the United States will not be able to persuade or threaten to force China to change its position on the Ukrainian issue.

“China cannot accept the US point of view.

The statements of the American ambassador should be considered against the backdrop of growing Sino-American rivalry, and for China, Washington's point of view is unacceptable, ”the expert emphasized.

Beijing does not want to be dragged into the current situation on either side, Sergei Lukonin added.

“Naturally, it is unacceptable for Beijing that the United States of America, firstly, accuses China of having a “pro-Russian” position, and secondly, that Washington, in principle, turns to Beijing with any claims on the issue of this conflict. .

The PRC has a clear position, which is that the conflict was provoked by the actions of the United States and NATO, ”the political scientist noted.

Vladimir Bruter, an expert at the International Institute for Humanitarian and Political Studies, in an interview with RT noted that Washington requires all countries of the world to understand the situation identical to the American one.

“If it is not there, they begin to demand it.

In the case when the country to which this is relevant is weak enough, they threaten, but this will not work with China.

Therefore, Burns's words are empty, but the United States will constantly remind of its position, ”the expert said.

The United States also tried to act in relation to India and Indonesia, but these countries have become too strong to be forced to change their position on such important issues, Vladimir Bruter added.

“In fact, they have not achieved any results in restricting the import of Russian energy carriers and changing the official position in these countries.

The President of Indonesia has just visited Moscow and held quite meaningful negotiations with the President of Russia, ”the political scientist noted.

At the same time, Vladimir Bruter believes that China does not take a completely neutral position on the Ukrainian issue, despite the statements of Western media and experts.

He just does not advertise it and wants to see how the situation develops.

A clearer position of China will be formed when it becomes clear what the military operation in Ukraine is going to, how it will end and what its political consequences will be, ”said the interlocutor of RT.

If China had taken an absolutely neutral position, then there would not have been a significant increase in trade with Russia, which continued even after the start of the special operation, Vladimir Bruter emphasized.

“However, some distance at which Beijing is on the issue of Ukraine does not mislead the United States, which is why the American Ambassador Burns makes such statements.

Washington, in principle, is happy with everything so far, since the PRC does not provide military assistance to Russia.

But the position of Beijing will change depending on what results we see in the development of the current situation,” concluded Vladimir Bruter.