Abu Dhabi Police warned the people of unknown messages via social media that promote types of drugs, calling on individuals not to deal with them at all, and to inform the competent authorities to take the necessary measures. 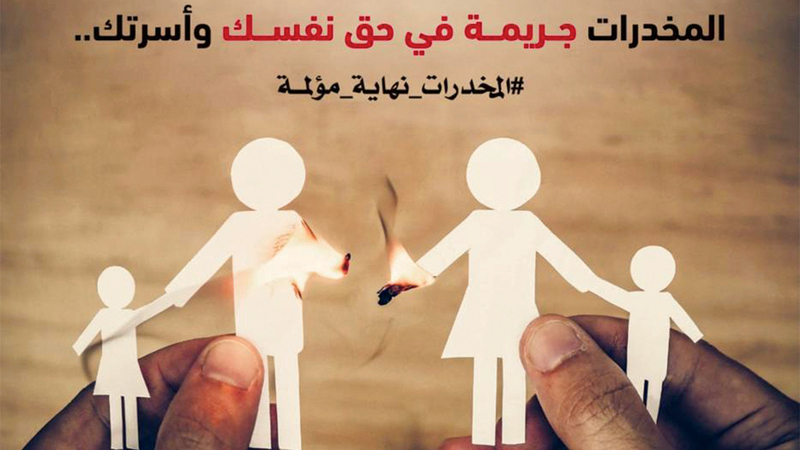 Abu Dhabi Police warned people of unknown messages via social media that promote types of drugs, calling on individuals not to deal with them at all, and informing the competent authorities to take the necessary measures.

Major Yousef Hassan Al Hammadi, from the Anti-Narcotics Directorate at Abu Dhabi Police, called on families to monitor anonymous email messages that reach their children from phone numbers outside the country, urging the public not to interact with these messages, and to report them by calling the “Aman Service.”

The Abu Dhabi Police General Command stressed the importance of concerted efforts between the various institutional and societal bodies, to stand as an impenetrable dam against drugs and to combat this deadly scourge, which negatively affects everyone.

She stated that the anti-drug elements play their role around the clock, in protecting society from its clutches and confronting it efficiently and effectively, and in various modern ways and means, and they succeeded in striking the schemes of drug dealers who do not hesitate to use all criminal methods, in order to leak their toxins into society, targeting young people. .

She stated that drug gangs resort to developing methods of smuggling and concealing narcotic substances on an ongoing basis. On the other hand, the authorities concerned with drug control are keen to develop their methods, so the Abu Dhabi Police were keen to support the Anti-Narcotics Directorate with modern methods and advanced technological means, to track the gangs and thwart their attempts to smuggle drugs.

And she warned of the danger of opening and managing personal bank accounts by other people, explaining that the security and financial authorities in the country warn against using the financial account for illegal acts without the knowledge of the account holder, as Articles 64 and 65 of Federal Law No. 30 of 2021 regarding follow-up to narcotic substances stipulate. And psychotropic substances with imprisonment or a fine of no less than 50,000 for each person who deposited, transferred or accepted the diversion himself or through others, with the aim of committing any of the offenses of abuse or personal use of narcotics or psychotropic substances stipulated in the law, and Article 65 increased the penalty to imprisonment and a fine of no less than 100,000 dirhams for anyone who possesses, conceals, or performs a money transfer, when there is sufficient evidence to condemn him.

In a related context, the Anti-Narcotics Directorate, in cooperation with the Abu Dhabi Police Youth Council, carried out yesterday a brainstorming session to discuss the causes leading to the abuse of narcotics and psychotropic substances, based on the keenness of the Abu Dhabi Police General Command to continuously educate community members on how to prevent falling victim to the scourge of drugs. .

The Deputy Director of the Anti-Narcotics Directorate, Colonel Hamad Suhail Al-Amiri, explained the importance of discussing the causes that lead to falling into the clutches of drugs, in terms of the surrounding environment and the importance of the family's role in this. Modern methods and self-censorship were also discussed.

The session emphasized the leadership’s keenness to protect young people from falling into the quagmire of addiction, as they are the cornerstone of the country’s development and prosperity process, pointing to the importance of raising awareness in homes and schools, and warning against drugs, in order to ensure the safety of society.

She touched on the role of social media in limiting drug promotion, and its importance in raising awareness of the harm and psychotropic effects of drugs, identifying future challenges, and criminal patterns and methods that promoters resort to.

The session also touched on a number of recommendations and outputs, reviewing the most prominent challenges facing society, and providing the best solutions that enhance awareness and protection of children from drugs.

Participants in the brainstorming session outlined the challenges related to prevention, awareness, early intervention, social care, rehabilitation and social integration programs, and reviewed and evaluated views on them. It was also agreed on solutions and initiatives that cover adolescents, citizens and residents of the country.