"American plague": why US Independence Day was overshadowed by mass shooting

The main American holiday - Independence Day - was overshadowed by two shooting incidents: in Highland Park, six people were killed in an attack, more than 20 were injured, and two police officers were injured in Philadelphia. US officials note that the United States is facing a unique "plague", becoming one of the least secure states in the world. At the same time, Joe Biden assured the Americans that he would not give up in the fight against the "epidemic of armed violence." At the same time, against the backdrop of security problems, an economic recession is looming in the United States, as financial analysts are actively signaling. Experts interviewed by RT stated that America's current problems were the result of erroneous actions by the Joe Biden administration in both domestic and foreign policy. 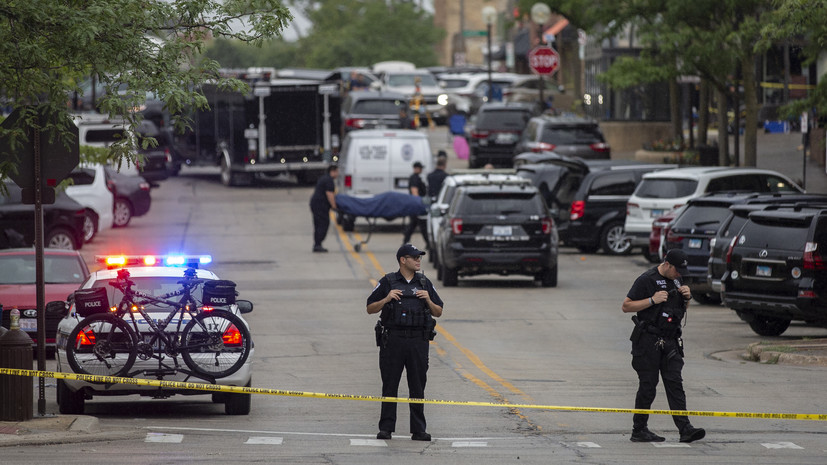 Modern American society is gripped by a unique affliction, Illinois Gov. Jay Robert Pritzker said after yet another shooting incident.

"It's appalling that America's celebration was ruined by a purely American plague," he said.

Pritzker admitted that he was infuriated by yet another loss of life as a result of the use of firearms.

He stressed that now is the time to raise the issue of tightening gun control in the United States again.

“July 4th is a day to reflect on our freedoms.

Our founders had muskets, not assault weapons, and I don't think any of them would say that the Constitution gives you the right to an assault weapon with a high-capacity magazine, or that this is more important than the right of people from that parade to life. ", the governor said.

On Monday, July 4, during a procession in honor of the US Independence Day in Highland Park, Illinois, 22-year-old Robert Crimo III staged a shooting.

At least six people died and 26 were injured.

Another shooting incident that day occurred in Philadelphia.

Two policemen were wounded there: one of them was shot in the shoulder, and the second received a bruise in the head (the bullet got stuck in his cap).

The assailant has yet to be apprehended.

Philadelphia Mayor Jim Kenny, commenting on the incident, criticized the gun culture in the United States.

According to him, America is the most armed country in history, but at the same time one of the least secure.

In turn, US President Joe Biden promised not to give up in the fight against the "epidemic of armed violence."

“We seem to be experiencing an endless deja vu.

Was it not the same in Uvalda, Texas, in Buffalo, New York, and in dozens of other places across the country where innocent people died untimely at the hands of armed criminals?

- NBC News journalists ask in the story, which is presented in the translation of InoTV.

Recall that the right of Americans to freely keep and bear arms is enshrined in the Second Amendment to the Constitution, which entered into force in 1791.

According to data from open sources, in the first six months of 2022, more than 300 incidents with mass executions of people have already occurred in the United States, as a result of which more than 300 people died, almost 1.5 thousand people were injured.

Against the backdrop of the death of ordinary Americans in mass shootings in the United States, according to media and analysts, a recession is looming.

As Politico points out, “whispering about a coming economic downturn has escalated to a near-roar” due to soaring prices, hikes in the base rate, and failed attempts by the White House to fight inflation.

According to the latest forecasts by Bloomberg Economics, the probability of a recession in the US over the next 12 months is 38%.

According to political scientist Ivan Mezyuho, the American myth of the exceptionalism of the United States is becoming an increasing problem for both ordinary Americans and international global security.

“Today, the United States has ceased to be the world hegemon, but the political elite is at the stage of denying this fact, which will inevitably result in internal socio-economic crises and miscalculations in foreign policy.

American society is faced with a mass of unresolved socio-economic problems, which are also acquiring a political color.

These problems, apparently, are growing, so it is not surprising that shootings continue on the streets of American cities, and ordinary residents are increasingly expressing dissatisfaction with rising prices, ”said the RT interlocutor.

The current problems of the United States were the result of the erroneous actions of the Joe Biden administration in domestic and foreign policy, said Vladimir Olenchenko, senior researcher at the Center for European Studies at IMEMO RAS.

“Additional problems arise due to the fact that in November the midterm elections to the Congress will be held in the United States.

This also leaves its mark, as it intensifies the domestic political struggle in the country, so I agree with the calls that are present in the American media: Washington should focus on solving domestic political and domestic economic problems, which can lead to an improvement in the situation in the United States, ”the expert emphasized in an interview. with RT.