The Civil Guard's account of the events in Santovenia de Pisuerga: the "blind" shot that wounded the lieutenant colonel, the previous attack with sticks and helmets...

Pedro Alfonso Casado, the head of the Special Intervention Unit injured this Friday in Santovenia de Pisuerga (Valladolid) is stable and, although his prognosis... 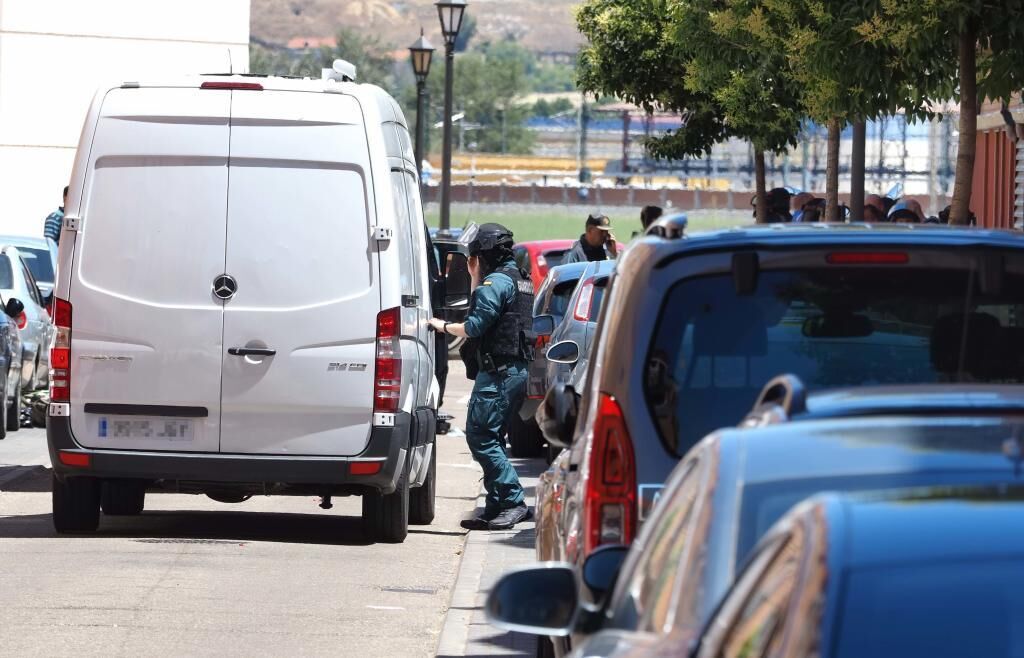 , the head of the Special Intervention Unit injured this Friday in

(Valladolid) is stable and, although his prognosis "continues to be very serious", the Government Delegation in Castilla y León explains in a press release that, according to the medical team treating him, "it is a good sign that 48 hours have passed since he was injured".

The lieutenant colonel responsible for this elite unit of the Civil Guard underwent emergency surgery at 10:15 a.m. on Friday after being hit in the head by "a shot fired 'blindly' from inside the house through the door closed by

, the 46-year-old man who remained barricaded for 13 hours with a hostage after allegedly killing a neighbor.

After surrendering around 2:00 p.m. on Friday,

, as he is known locally, was arrested and brought to justice on Saturday morning accused of "crimes of murder, attack, illegal detention and illegal possession of weapons."

"However, he required medical attention, so the judicial authority ordered him to be transferred to the hospital and he did not give a statement until hours later. The judge ordered his

late in the afternoon," explains the aforementioned press release, where The entire operation and the background of the event are detailed.

The emergency services received two calls around 11:30 p.m. on Thursday.

One of them reported a "massive brawl in the surroundings of Alfredo Martín street in Santovenia de Pisuerga", in which

the other spoke of 6/7 people "who were beating another who was on the ground and who were armed with sticks and helmets."

As a result of the assaults, two people had to go to the hospital.

It was about the fatal victim,

After being treated, when they returned to Santovenia de Pisuerga, the Civil Guard was still there.

"A device of the Civil Guard remained in place, in such a way that, shortly before 01:45 on Friday, the patrol agents were taking steps and interviewing a woman to find out more about what happened when they heard

inside the portal of the building in which the event occurred, number 8 of the aforementioned Alfredo Martín street," explains the succession of events in the press release.

The agents, he adds, entered immediately and found Dionisio still alive in the corridor of the portal.

"They moved him to the landing for security reasons and began to perform cardiopulmonary resuscitation on him. He died shortly after when the health services had arrived."

also targeted the victim's eldest son, who was accompanying him: "The deceased was accompanied by an adult son who he also tried to shoot but was unable to because

Subsequently, the aggressor, "who has numerous criminal records for drug trafficking, threats or robbery, among other things, barricaded his home and said he had hostages inside. It was the argument he used, that he had hostages , to urge the agents to withdraw".

Around 6:30 am on Friday, the Civil Guard, who had taken up positions and cordoned off the area, heard another detonation inside the building.

Half an hour later, the Special Intervention Unit (UIE) of the Civil Guard displaced from Valdemoro (Madrid) arrived in the town of Valladolid.

from inside the house through the closed door hit Lieutenant Colonel Pedro Alfonso Casado, head of the UEI displaced there. An ambulance deployed to instances of the Civil Guard that transferred the lieutenant colonel to the Clinical Hospital of Valladolid".

While he was undergoing surgery, the Civil Guard negotiation team continued to mediate with

until around 1:00 p.m. he agreed to leave the hostage.

that he was the boyfriend of his own daughter.

"But PASH continued to make the Civil Guard believe that he had another hostage inside the home. Around 2:00 p.m. he ended up turning himself in without putting up a fight. Throughout the negotiation, the alleged murderer said he was very upset, something that he himself attributed to the

that he consumed on a regular basis. Inside the house was the weapon used to fire the shots. It is an

", details the end of the operation by the Delegation of the Government..

, has conveyed to the Civil Guard her gratitude and appreciation for the work carried out for "her professionalism and dedication.

An example of this delivery is the lieutenant colonel who was injured on Friday.

I sympathize with the pain of his family and his friends to whom I send a big hug.

I hope and wish that it ends up being restored.

I have been told of his strength and good spirits.

They are tricks that play in his favor and to which we all cling to be optimistic ", she concludes.

Barcones has also praised the work of

the Clinical Hospital of Valladolid

and has highlighted "the exemplary behavior of the town of Santovenia de Pisuerga, with its mayor at the head, for the collaboration it provided at all times. Thanks to the residents of this town for his patience and knowing how to be"...