Rachel Jedinak was eight years old on July 16, 1942, when the French police arrested her, her older sister and their mother during the great Vel d'Hiv roundup. For twenty-six years, she has been telling… 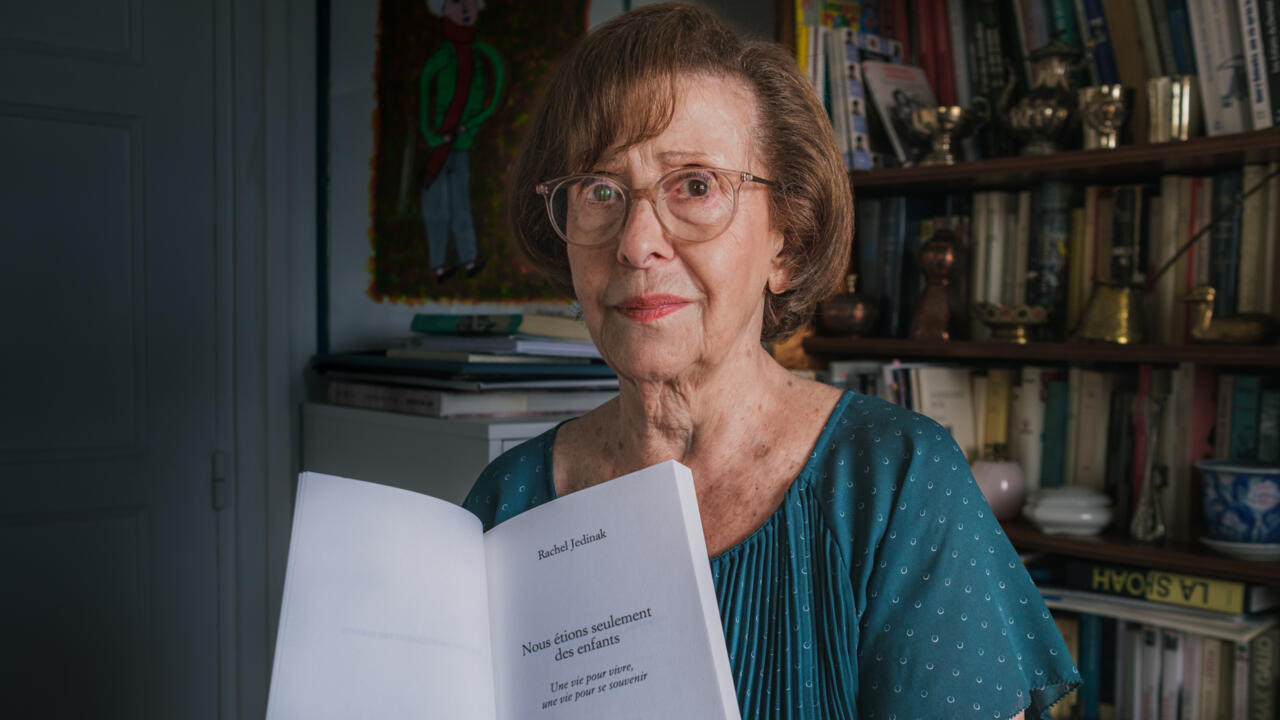 In 2018, Rachel Jedinak told her story in a book: "We were only children".

Rachel Jedinak was eight years old on July 16, 1942, when the French police arrested her, her older sister and their mother during the great Vel d'Hiv roundup.

For twenty-six years, she has been recounting tirelessly.

On the desk behind which she sat down, she only put her watch.

Now she watches the auditorium of the Shoah Memorial fill up.

Some 90 students from a college in the Paris suburbs settle down whispering on the blue velvet seats, stunned by the early heat of this month of June.

She must be 70 years old

,” whispers one of them in the ear of his comrade about the old lady in an emerald green tunic facing them.

I experienced the Second World War, and I am not a dinosaur

”, she announces from the outset.

The joke sounds like a warning: the events she is about to narrate could well happen again.

From the back of the room where we slipped in, just behind the row occupied by the teachers, the speaker is first of all a voice.

A voice a little dented by time, with regular modulations where pain sometimes pierces.

A voice, above all, which after being silent for too long no longer wants to stop, but which for the time being launches into a timed presentation.

She takes her audience to working-class pre-war Paris, to the district of Ménilmontant where the Psankiewicz family occupies a two-room apartment with WC on the landing.

There are Abram and Chana, immigrants from Poland in the early 1920s, Louise, born in 1929, and Rachel five years later.

She talks about the kids of all origins who play hopscotch or knucklebones in the street, the anti-Semitic insults that sometimes trigger brief fights... But also her big sister who teaches her the basics of reading.

When war breaks out, Rachel Jedinak already knows how to decipher the resounding calls that bloom on the walls.

She mimes with the tip of her index finger: “

These two words, abstract for a five-year-old girl, take on a concrete turn when her father enlists in the Foreign Legion.

While he leaves to fight in the Ardennes, the rest of the family takes the road of exodus.

But caught up by the German army, she decides to return to Paris.

Demobilized, his father finds a job as a carpenter-cabinetmaker and life resumes its course.

examination of his situation

Like some 3,700 men, he was arrested during what will be called the “greenback” raid.

Sent to the Beaune-la-Rolande camp, he was deported thirteen months later to Auschwitz by convoy n°5.

Family life is punctuated by anti-Jewish decrees: obligation to shop only between 3 p.m. and 4 p.m.;

obligation to wear the yellow star.

The arms of the old lady come alive to better bring her story to life.

On July 15, 1942, the general secretary of the police René Bousquet gave the green light to the roundup of some 27,000 Jews aged between two and sixty, in which more than 4,000 Parisian police officers were to take part the next day.

The information reaches the ears of Rachel Jedinak's mother who hides them, she and her sister, at their paternal grandparents.

Saved by a slap

The little girls have been denounced.

Two officials lead them to join their mother.

In the street, women and their children come out of all the carriage entrances.

Supervised by uniforms, the star-studded crowd walks to La Bellevilloise, a cultural space where it must transit before being taken to the Vélodrome d'Hiver.

They will be nearly 13,000 to be thus arrested in the capital in two days.

Massed at their windows and on the sidewalks, the Parisians observe the scene.

Some sneer, others cross themselves.

In the room of La Bellevilloise, the heat is unbreathable.

But when you're eight years old, when you're scared, you don't want to leave your mother,

I screamed, I refused to listen to him.

It was the first time.

It saved my life.

When the two children approach the exit, the policemen on guard ostensibly look away.

Their mother will be taken to Drancy then deported to Auschwitz, where she will be killed as soon as she arrives.

Photo of the Psankiewicz family.

Rachel stands on her mother's lap.

Beside her, her sister five years her senior.

The two little girls take refuge with their grandparents and survive on their own.

They were arrested again on February 11, 1943. Once again, they managed to escape.

The raids, which are more and more frequent, force them to live in hiding.

Rachel Jedinak moves in with a nanny in the provinces under a false identity.

But she ends up learning her real name.

If she can't pronounce it, she understands that the surname is Jewish.

From then on, the little girl was regularly beaten and threatened with denunciation.

I had a good tongue out, but from then on, I couldn't speak.

After months of fear, she finds refuge elsewhere.

The German army capitulated on May 8, 1945. The survivors of the camps began to return.

In Paris, they are taken to the Hôtel Lutetia.

The little girl rushes there and asks about her parents from the first one she meets.

We questioned them, but they did not speak.

What could they say?

Every day, lists of returnees are displayed in the hotel lobby.

None of the seventeen members of his family appear there.

When Rachel Jedinak opens the door to her apartment in the 12th arrondissement three days after her testimony at the Memorial, we finally discover a petite lady with a shy smile and whose eyes seem veiled in eternal sadness.

She slowly settles into a corner of the living room to complete her story.

She pauses to give us time to take notes, worries about our comfort.

But when someone tries to interrupt her, she almost gets angry: “

Write down whatever you want, but let me finish.

In colleges and high schools.

With police students to whom she learns the importance of knowing how to disobey orders that we consider unjust.

The tone is immediately defiant: “

I'm not afraid of anything.

No one impresses me.

After what I've been through, branding means nothing to me.

With the approach of the commemorations of the Vel d'Hiv roundup, she is solicited from all sides.

She is tired, but determined to make up for lost time.

For fifty years, we were not allowed to speak

In the aftermath of the Second World War, testimonies like his have no place in the story of a resistant France that the authorities set out to write.

We were gray shadows on the board.

France was not proud of what it had done

His thirst for speaking is constantly impeded.

People were not ready,

Sometimes people told me to be quiet, that I should consider myself lucky to be alive.

To build oneself with this kind of answers, believe me, it is very difficult.

Rachel Jedinak at the Shoah Memorial in front of 3rd grade students from a Clamart college, June 17, 2022. © François-Damien Bourgery / RFI

In this post-war France, the population is more preoccupied with its own subsistence.

Rachel Jedinak herself starts working at the age of 14.

She married young to a former resistance fighter, son of Polish Jewish immigrants.

And since life must go on, she gives birth to a daughter who, herself, will have two sons.

These are his revenge.

While they wanted to exterminate me, I have two brilliant grandchildren

Their photos occupy a whole section of his library.

One evening in 1990, after the desecration of the Jewish cemetery in Carpentras, one of them told him that he had told his grandmother's story to his class.

He told me that his teacher didn't know anything, that the other children didn't either, and that I had to bear witness to the children.

He was the one who gave me the courage to bring it all to the surface.

For the first time, the French State, through the voice of its president, recognizes its responsibility in the deportation of the Jews.

Rachel Jedinak is a few meters from the stand.

The floodgates are open, the survivors can finally testify.

When she learns that former members of her school have had a plaque affixed there in memory of the children killed in deportation, Rachel Jedinak founds the Rue Tlemcen School Committee with them.

They note the names of Jewish children in the registers of the establishments, cross them with the lists of the Memorial of the deportation.

This laborious work allows the installation of hundreds of other commemorative plaques in schools in Paris and its suburbs.

Students should then be explained their meaning.

At the beginning, some looked at us with round eyes

She no longer remembers her first intervention.

She only remembers having had tears in her eyes when she mentioned the slap given by her mother.

I learned to toughen up

His listeners have also changed.

Despite the negationist or revisionist speeches of prominent personalities, students are now better prepared to hear it.

The old lady, elevated to the rank of officer of the Legion of Honor last November for her memorial action, admits that she no longer wants to go to certain places.

But what worries her most is being one of the last to still be able to testify.

It's up to you now, young people, to be able to restore the truth,

That's why we are going to talk to young people, so that they speak up and say:

And soon, we won't be able to do that anymore.