Demonstrations renewed in Khartoum after a bloody day, and the police are trying to disperse them

On Friday, Sudanese protesters resumed demonstrating against the military coup in Khartoum, while Sudanese police fired tear gas to disperse them, after one of the bloodiest days of protests this year. 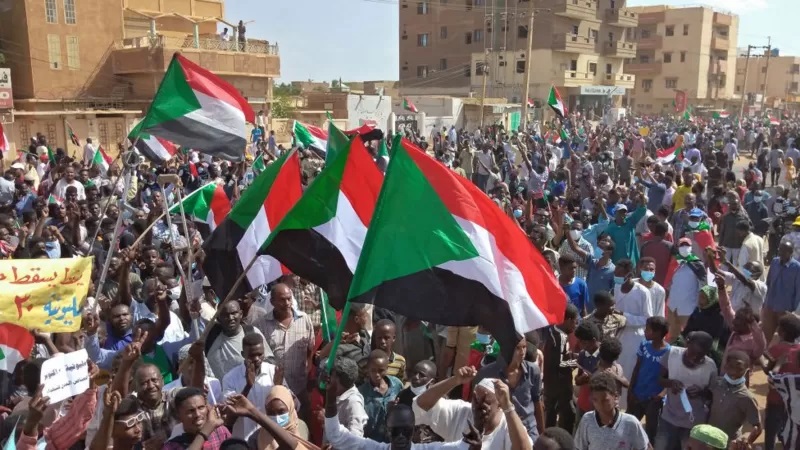 Demonstrations renewed in Khartoum after a bloody day, and the police are trying to disperse them

On Friday, Sudanese protesters resumed demonstrating against the military coup in Khartoum, while Sudanese police fired tear gas to disperse them, after one of the bloodiest days of protests this year.

Protesters in the Sudanese capital, near the presidential palace, chanted slogans such as "the people want the fall of the proof" and "we demand revenge."

Some of them carried pictures of the victims who fell Thursday when at least nine Sudanese were killed during a demonstration against the coup carried out by Lieutenant-General Abdel Fattah Al-Burhan in October 2021.

Most of the victims were killed by live bullets, including a minor.

Since the coup, 113 protesters have been killed and thousands injured by security forces who, according to the United Nations, fire live ammunition at protesters.

On the other hand, the Sudanese police accused the demonstrators of injuring dozens of its members and members of the army, "some of them in serious condition", as well as damaging vehicles and setting fires, during Thursday's demonstrations.

In Khartoum, protester Shawki Abdelazim told AFP, "We took to the street spontaneously in response to the violence that took place yesterday."

In recent weeks, the United Nations, the African Union and the Eastern and Central African Development Community (IGAD), through what is known as the "tripartite mechanism", have exerted pressure for a direct dialogue between the military and civilians, but the main opposition blocs, such as the Forces for Freedom and Change and the Umma Party, I refused to have this conversation.

On Friday, the tripartite mechanism condemned in a joint statement the violence and "excessive use of force by the security forces and the lack of accountability for such acts, despite the repeated commitments of the authorities."

For her part, Norwegian Ambassador to Sudan Theresa Loken stressed that "torture, sexual violence and inhuman treatment are unacceptable."

“Sudanese security forces’ ongoing violence against protesters is outrageous,” USAID Administrator Samantha Power wrote on Twitter. “At least nine more people have been killed this week, and Sudanese have experienced yet another internet outage that has kept them from news. We will not The challenge of the Sudanese yearning for democracy is succeeding.”