If you have walked through these places, you have been to Hong Kong!

"Let the sea wind blow for five thousand years, Every teardrop seems to speak of your dignity, Let the tide accompany me to bless you, Please don't forget my face that will never change yellow. " This popular song, 1997, Countless people sang this song with red eyes but laughed. Time comes to 2022, It is the 25th anniversary of Hong Kong's return to the motherland. This "Pearl of the Orie 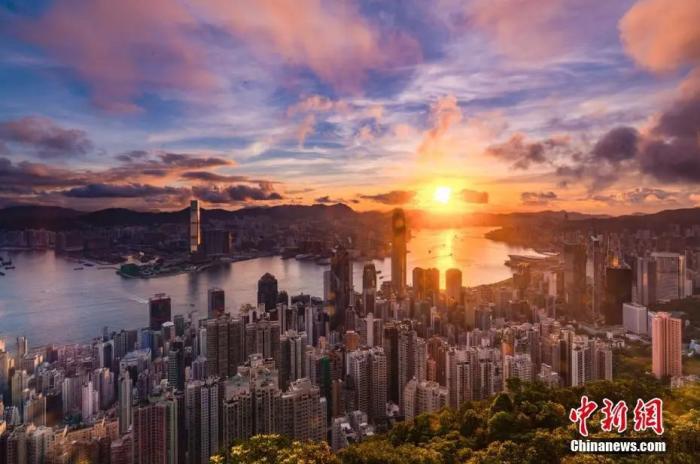 Every teardrop seems to speak of your dignity,

Let the tide accompany me to bless you,

Please don't forget my face that will never change yellow.

Countless people sang this song with red eyes but laughed.

It is the 25th anniversary of Hong Kong's return to the motherland.

This "Pearl of the Orient" is getting more and more dazzling...

Here, you can buy good things from all over the world,

Punch in the same scene as the classic movie,

Feel the blend of historical simplicity and modernity...

Data map: Both sides of the Victoria Harbour.

If you come to Hong Kong,

With the sound of a command,

The flag-raisers are walking in neat Chinese steps

Glittering gold on the side.

It has witnessed the growth of Hong Kong since its return to the motherland 25 years ago.

It has also become a must-see check-in place for tourists to Hong Kong.

When you wander the streets and alleys,

sound from far to near,

This sound comes from only on Hong Kong Island

The double-decker tram that you can only see,

It is affectionately called "

It has a history of more than 100 years,

It carries the collective memory of generations of Hong Kong people.

There are trams in Hong Kong with advertisements to celebrate the 25th anniversary of Hong Kong's return to the motherland.

Why don't you just get on the ding ding car,

Travel back in time to the old days!

Data map: The streets of Causeway Bay are crowded.

The high-rise buildings on Hong Kong Island are lined up.

Get off the "Ding Ding Car" and spend it!

The bustling scene of Mong Kok.

It has always been known as a "shopping paradise".

The data picture shows that the downtown area of ​​Causeway Bay is crowded with people.

It is one of the most expensive places to rent in the world.

There are many large department stores and shopping malls here.

It is a "shopping destination" that visitors to Hong Kong must visit.

Across Victoria Harbour from Causeway Bay

It's the Tsim Sha Tsui waterfront.

You can see citizens jogging in the morning,

You can also get on the Star Ferry.

There is also the

of Stars that has to be mentioned !

The bronze statue of Bruce Lee on the Avenue of Stars.

The picture shows the bronze statue of Anita Mui, the daughter of Hong Kong.

The bronze statue of McDull on the Avenue of Stars.

are the focal points on the road

The picture shows that the palm print of the superstar on the Avenue of Stars has been changed to a wooden railing. The angle is suitable for tourists to take pictures with the Victoria Harbour as the background. Visitors can also scan the QR code next to the palm print to watch the short film of the superstar.

There are also more than 100 palm prints of celebrity superstars,

The Victoria Harbour waterfront is even more unique.

The high-rise buildings on Hong Kong Island are shining brightly,

It is a real portrayal of Hong Kong's prosperity.

West of Kowloon, by the side of Victoria Harbour,

In the West Kowloon Cultural District of Hong Kong,

A building shaped like a huge square tripod stands facing the sea.

It will officially open here.

The picture shows the seventh exhibition hall under construction.

"Luoshen Fu Map", which was designated as "the first volume of Luoshen Fu" by Qianlong,

The famous porcelain "Baby's Pillow" from Ding kiln in the Northern Song Dynasty,

"Autumn Colors of Rivers and Mountains" by Zhao Boju, a painter in the Southern Song Dynasty

914 artifacts from the Palace Museum

All will be shown here.

There are also many local special cultures in Hong Kong.

Horse racing is one of them.

was built in Happy Valley on Hong Kong Island

This once aristocratic sport

It was popularized with the blessing of gambling.

After returning to the motherland,

"The horses run, the dances dance."

The MTR will add a "Race Station".

The popularity of this event is evident.

Why don't you sit down and savor

Order a cup of handmade Hong Kong-style milk tea and a piece of toast,

You can also taste it in a small cafe

This store is not big.

Flags of all sizes are plastered all over the walls.

The proprietress, Li Kaihu, participated in the rally to support the police.

The restaurant was attacked by protesters.

"Supporting the police is the best thing I've ever done."

After the incident was reported by the media,

caused great repercussions in the society,

Customers from the mainland and Hong Kong have come to support them.

The Silver Dragon Cafe is managed by Li Kaihu alone.

It was once known as "One Person Tea Restaurant".

The Silver Dragon Cafe was full of guests.

Countless netizens in the mainland were moved by her words and deeds.

Not only carries the authentic food of Hong Kong,

It also carries 1.4 billion "hearts" of patriotism and love for Hong Kong.

The taste of food attracts people from different regions to gather together,

Build the foundation for people to come together.

Such an indispensable "star bridge".

It is the longest sea-crossing bridge in the world.

The total length is about 55 kilometers, spanning Lingdingyang.

It borders Zhuhai City, Guangdong Province and the Macao Special Administrative Region to the west.

under "one country, two systems"

It is the first time that Guangdong, Hong Kong and Macao have cooperated and built

A bridge connects three places, the moat turns into a thoroughfare,

The Hong Kong-Zhuhai-Macao Bridge connects Hong Kong and the mainland across the sea.

Hong Kong film and television dramas have become the "bridge" in the hearts of the people of the two places.

In the movie "Chongqing Forest",

It has also become a must-see place for movie fans.

Shek Ban Street, Hong Kong, is located at the junction of Hollywood Road in Central to Connaught Road Central.

The same is true of

It is a famous nostalgic old street in Hong Kong.

In the movie "In the Mood for Love",

On the old stone streets,

And if you want to overlook the bustling Central,

Then you must go to

Victoria Peak is the highest point in Hong Kong.

If you take the Peak Tram with a history of more than 130 years,

It only takes 8 minutes to get there.

The Peak Tram in Hong Kong shuttles through the woods, allowing passengers to enjoy the view of high-rise buildings on both sides of the Victoria Harbour.

The prosperity of the whole Hong Kong can be seen.

You can also start from here,

Take a stroll along the ancient trails or challenge the Hong Kong Island Trail.

Central at the foot of Mount Taiping

It symbolizes the prosperity and achievement of the "Pearl of the Orient".

symbolizes the Hong Kong spirit of struggle and struggle.

As the song sings,

"Under the Lion Rock and help each other,

To pursue the ideal together,

This song "Under the Lion Rock" is exactly what was sung.

Lion Rock is located in the middle of the Kowloon Peninsula, 495 meters above sea level.

It looks like a crouching male lion, occupying the top of the mountain.

There are stone paths on the east and west sides of Lion Mountain for hiking.

It has also become a must-see for Hong Kong mountain hikers.

The picture shows the flower arrangement for the celebration of the handover in Tamar Park, Admiralty.

The glory and development of Hong Kong in the 25 years since its return,

Witnessing the "Spirit of Lion Rock"

The spirit is immortal, the Hong Kong flows forever,

Hong Kong, tomorrow will be better!