The Tunisian judiciary on Monday ordered the release of former Prime Minister Hamadi Jebali, four days after his arrest, according to one of his lawyers. 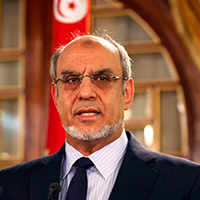 The Tunisian judiciary on Monday ordered the release of former Prime Minister Hamadi Jebali, four days after his arrest, according to one of his lawyers.

Lawyer Samir Dilo said that a judge ordered the release of Al-Jabali, while keeping him pending investigation on suspicion of involvement in "money laundering".

Jebali is expected to appear on July 20 before an investigative judge at the Anti-Terrorism Judicial Pole in the Tunisian capital, according to Dilo.

The former Tunisian Prime Minister (2011-2013) carried out a hunger strike after his arrest before being taken to hospital on Saturday, according to his lawyer.

And last Thursday, Jebali was arrested in the city of Sousse, 150 km south of the capital, Tunis, on the grounds of "suspicion of his involvement in a money-laundering case related to transfers from abroad to a charitable organization in Tunisia," according to the Ministry of the Interior.

Al-Jabali denies these accusations, and accuses the authorities of using the judiciary to settle political scores with opponents of President Qais Saeed.

It is noteworthy that Jebali previously held the position of Secretary-General of the Ennahda Party.

Tunisia has been going through a deep political crisis since President Kais Saied monopolized the executive and legislative powers on July 25, when he dismissed the prime minister and suspended parliament before announcing his dissolution.

Saied is under fierce criticism from the opposition for excluding her from a national debate on a new draft constitution that he intends to put to a referendum on July 25.

The opposition accuses him of seeking to approve a "tailor-made" constitution.