“As a result of strikes on the Azov deployment point: the Russian Aerospace Forces destroyed more than 100 military Armed Forces of Ukraine and mercenaries in Kharkov

More than 100 soldiers of the Armed Forces of Ukraine, foreign mercenaries and up to 15 pieces of equipment were destroyed by the strikes of the Russian Aerospace Forces at the location of the Nazi formation "Azov" in Kharkov, the Russian Defense Ministry reported. The defense department also drew attention to the increased cases of "friendly fire" on the positions of the Armed Forces of Ukraine. The reason is the poor training of the mobilized and the low level of training of foreign mercenaries. In addition, the Russian Aerospace Forces in Kremenchug hit the hangars with weapons and ammunition received from the United States and European countries. 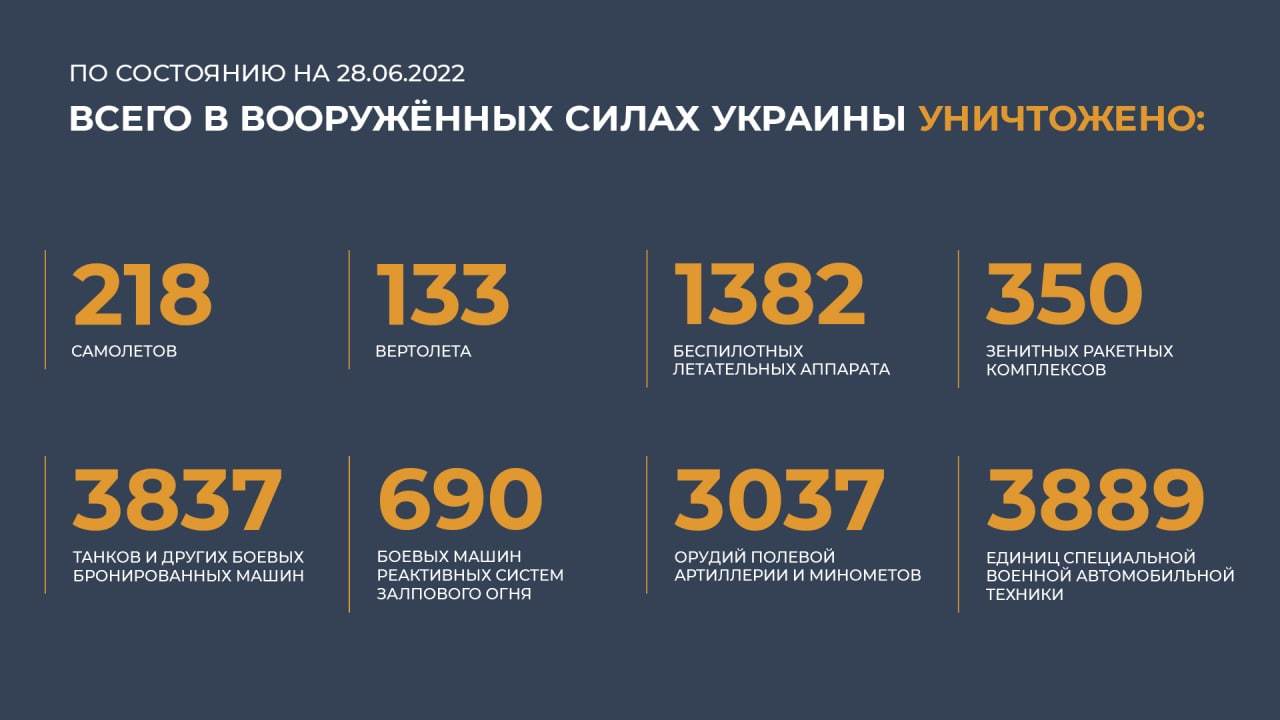 He clarified that the warehouses were located in the area of ​​the Kremenchug road machinery plant.

“As a result of a high-precision strike, Western-made weapons and ammunition, concentrated in a warehouse area for further shipment to the Ukrainian group of troops in Donbass, were hit.

The detonation of stored ammunition for Western weapons caused a fire in a non-functioning shopping center located near the territory of the plant,” Konashenkov said.

In addition, the Russian Aerospace Forces hit two command posts in the Disputable DPR region, as well as manpower and military equipment of the Armed Forces of Ukraine in 28 districts in the Luhansk and Donetsk directions.

24 command posts, artillery and mortar units in 58 districts, as well as manpower and military equipment in 304 districts were attacked by aircraft, missile troops and artillery.

The Armed Forces of Ukraine are suffering critical losses as a result of the joint actions of the Russian Armed Forces, units of the People's Militia of the DPR and LPR, the Russian Defense Ministry stressed.

“As a result of the strikes of the Russian Aerospace Forces on the deployment point of the Nazi formation “Azov” in Kharkov and one of the battalions of the 92nd motorized infantry brigade near the village of Pokotilovka, Kharkov region, more than 100 Ukrainian military personnel, foreign mercenaries and up to 15 units of armored and automotive equipment were destroyed,” said Konashenkov.

According to him, cases of “friendly fire” from their colleagues have become more frequent in Ukrainian positions due to “poor training of mobilized citizens and the low level of training of foreign mercenaries.”

“So, recruits who arrived to resupply the 97th battalion of the 60th infantry brigade were subjected to mortar fire from their colleagues.

A similar incident occurred in the 28th Mechanized Brigade of the Armed Forces of Ukraine, where foreign mercenaries opened fire on the reconnaissance group of this unit.

As a result, four servicemen died on the spot, three were injured, ”said a representative of the Russian Defense Ministry.

Members of the White House administration are increasingly doubtful that Ukraine will ever be able to regain control of the territories lost since the start of the Russian special operation, CNN reports, citing officials in the United States.

It is noted that Joe Biden advisers are discussing whether Vladimir Zelensky should change his attitude towards what could be called a victory for Kyiv, and agree to territorial concessions in order to end the conflict as soon as possible.

According to unnamed representatives of the US presidential administration, despite such a pessimistic assessment of events, Washington does not intend to put pressure on Kyiv on this issue.

At the same time, the White House allegedly hopes that Ukraine will be able to recapture part of the territories during a possible counteroffensive at the end of 2022.

“Whether Ukraine will be able to return these territories, largely (if not completely) depends on how great our assistance will be to her,” said an aide to one of the members of Congress, aware of the discussions.

According to him, Ukraine has requested 48 multiple launch rocket systems from the United States, while the Pentagon has promised to provide only eight.

Meanwhile, on June 28, the representative office of the Luhansk People's Republic at the Joint Center for Control and Coordination of the Ceasefire reported that the Ukrainian military fired at Perevalsk in the LPR in the morning from the M142 HIMARS MLRS supplied by Washington.