Why are the French public media, including RFI, on strike this Tuesday?

In France, there will undoubtedly be a lot of music on the radio and reruns on television this Tuesday, June 28. All the public audiovisual unions are calling for a strike. At RFI, but also… 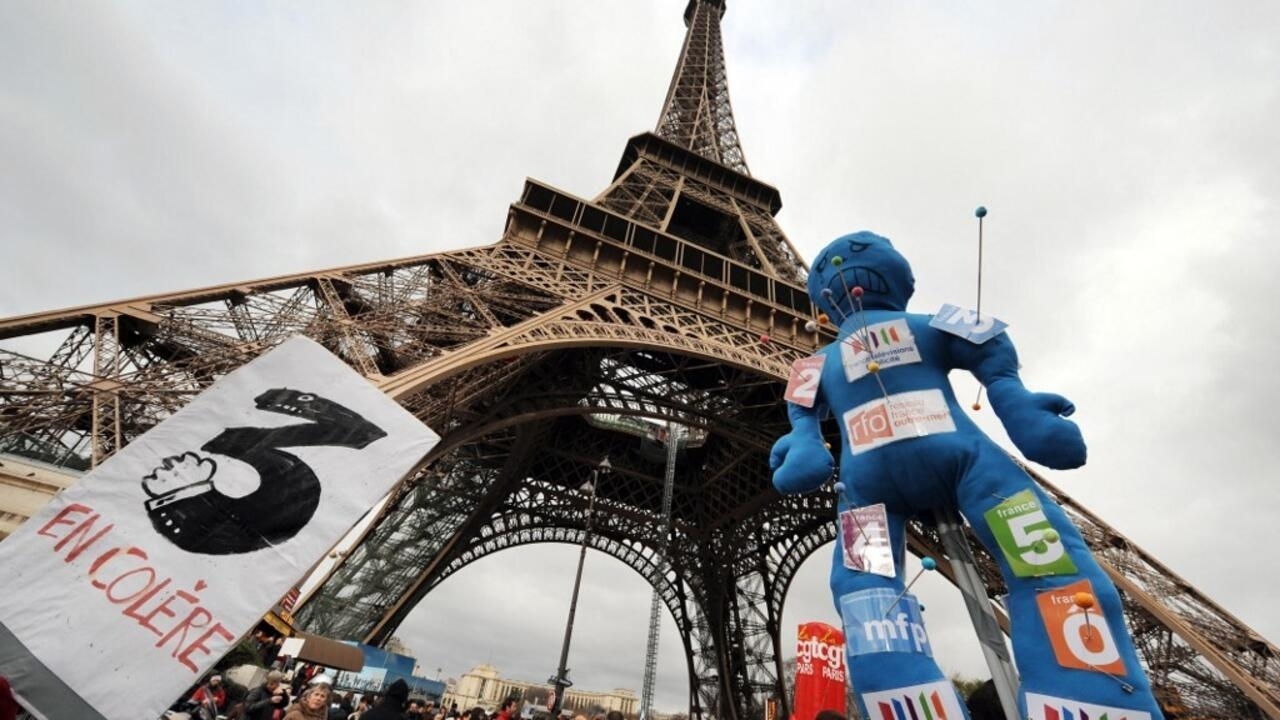 Why are the French public media, including RFI, on strike this Tuesday?

A giant voodoo doll bearing the logos of French public television on November 25, 2008 at the foot of the Eiffel Tower in Paris, during a demonstration by France Televisions employees against the project of the government of François Fillon, under the presidency of Nicolas Sarkozy , to end advertising on public television.

In France, there will undoubtedly be a lot of music on the radio and reruns on television this Tuesday, June 28.

All the public audiovisual unions are calling for a strike.

At RFI, but also at France 24, France Television or Radio France, concern is mounting because of the announcement of the abolition of the fee which finances the public media.

The contribution to public broadcasting, the other name of the license fee, will disappear.

This was Emmanuel Macron's promise to restore purchasing power to the French.

It amounts to 138 euros per year, and is paid, with some exceptions, by all French taxpayers with a television.

The journalists' unions have calculated that the license fee costs only 38 euro cents a day to the French, and that its abolition would involve finding more than 3 billion euros annually to finance RFI, France 24, Radio France and France Televisions.

The unions fear for the independence of the public service: all fear that the bosses of chains are obliged to regularly give alms to the guardianship to make ends meet.

This was not the case with a resource like the license fee, directly assigned to the media.

, the Jean-Jaurès Foundation, through the voice of researcher Julia Cagé, proposes an alternative: maintaining the royalty, but in the form of a progressive tax, so that it weighs less on the budget of more modest.

At a time of the onslaught of fake news and propaganda wars, the French public audiovisual service must have the "

The other concern is a

project to merge all the public audiovisual sector

, a project relaunched by the Senate.

Merger that would make the public sector stronger against the behemoths of the private sector: Bolloré and TF1-M6 for example.

But, still according to the unions, it would be a project synonymous with social damage and the impoverishment of content.

For the intersyndicale, the public audiovisual sector could no longer fulfill its primary missions: to inform, educate and entertain all citizens, without the pressure to make audiences.

To listen: How the Agence Radio France certifies the info for the antennas of the Round House