“For selfish purposes”: why London announced the threat of instability in the event of a settlement of the conflict in Ukraine

Attempts to quickly resolve the conflict in Ukraine will create instability and strengthen the position of Russia, said British Prime Minister Boris Johnson. According to him, in this case, Moscow will allegedly get the opportunity to manipulate other countries and international markets. The official representative of the Russian Foreign Ministry, Maria Zakharova, called Johnson's statement "monstrous", and also stated that this is not the first time that the British authorities are trying to exploit the topic of the "Russian threat" in order to switch the attention of the country's population from pressing problems. According to experts, Johnson uses the Ukrainian factor to support his political career. In addition, acting in this vein, London contributes to the weakening of the EU, analysts say. 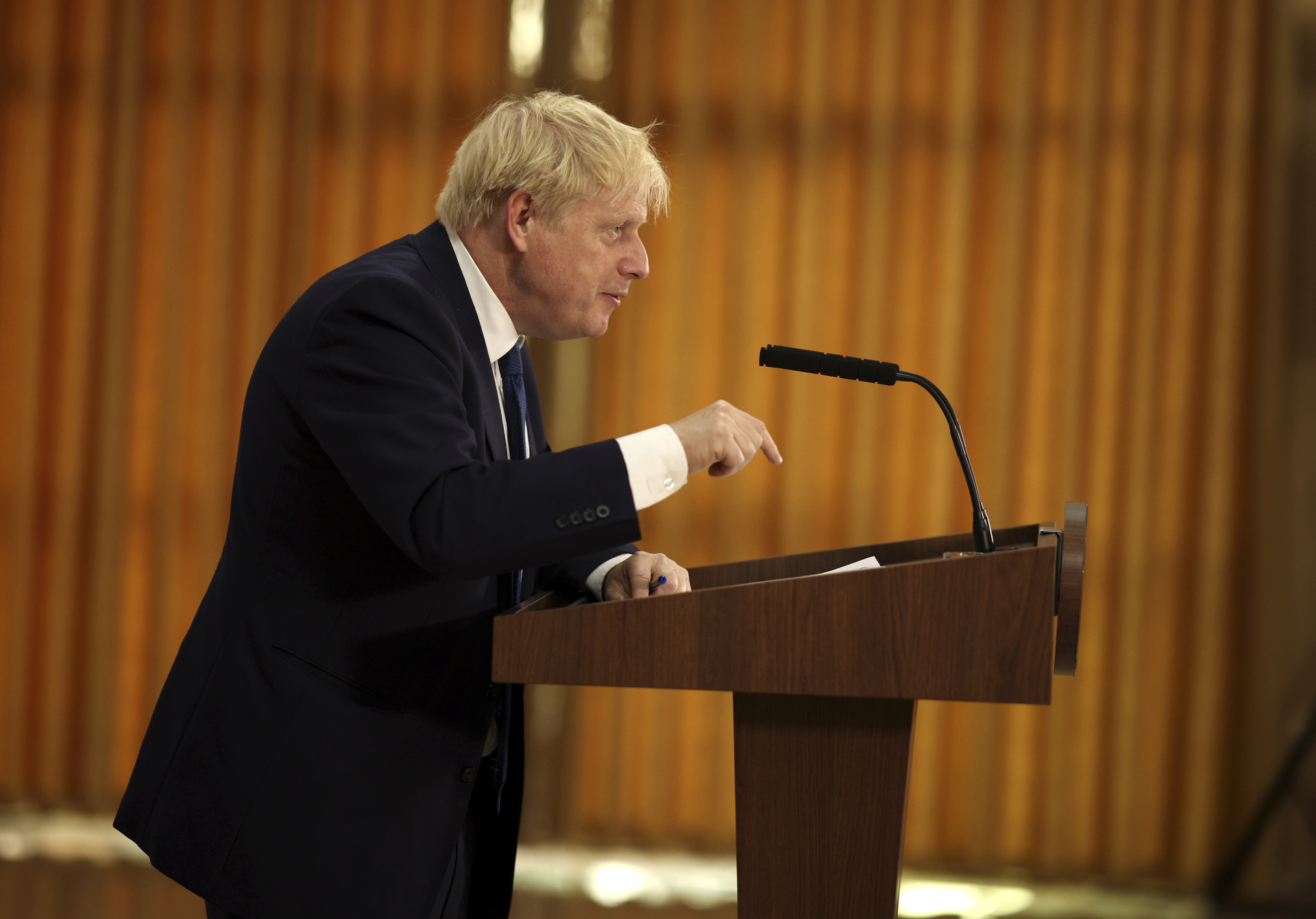 The desire to resolve the conflict in Ukraine in the near future will only result in instability in the world and will give Russia certain advantages, British Prime Minister Boris Johnson said at a meeting with French President Emmanuel Macron on the sidelines of the G7 summit in Germany.

“The Prime Minister emphasized that any attempt to resolve this conflict at the moment will only lead to prolonged instability and give Putin the freedom to endlessly manipulate both sovereign countries and international markets,” the British Prime Minister’s Office said in a statement.

They also noted that both leaders agreed that it was "a critical moment in terms of the course of this conflict, and that there is an opportunity to change its course."

“At first, you refuse to believe that such monstrous statements are possible in principle, but then you remember that we are talking about the “liberal democratic monarchy” regime, and everything falls into place,” the diplomat wrote in her Telegram channel.

She also noted that this is not the first time the British government is trying to exploit the topic of the "Russian threat" in order to switch the attention of the country's population from pressing problems.

“This is a convenient topic that is designed to divert attention from the internal political collapse of the British monarchy in the light of endless conspiracies, crises and simply corruption scandals,” Zakharova emphasized.

The day before, Boris Johnson also issued a statement that if Western countries for any reason refuse to support Ukraine, they will harm themselves.

"If you back down, if you let Putin succeed... the price will be much, much higher," the British prime minister told reporters upon his arrival at the G7 summit.

And on June 25, Johnson's office reported that the UK was ready to provide Ukraine with loan guarantees for a significant amount.

“The Ukrainian government fears that if it does not receive urgent financial assistance, then by the autumn it may run out of funds.

To assist with this critical need, the UK stands ready to provide additional $525m (£429m) loan guarantees from the World Bank later this year.

It also argued that these guarantees help preserve the Ukrainian state and are an investment in its strategic resilience.

At the same time, the British government's approach was not appreciated by the citizens of the United Kingdom.

Thus, readers of the Daily Express criticized this decision, saying that Johnson's office takes on too many obligations towards Ukraine and does not pay attention to internal problems at all.

Meanwhile, Kyiv requires Western countries not to reduce the amount of support provided.

Thus, the head of the Ukrainian Foreign Ministry, Dmitry Kuleba, in a joint article with his British colleague Liz Truss for The Telegraph newspaper, said on June 25 that the “defeatist voices” of those who began to tire of the conflict and who “offer to sell Ukraine in exchange for a speedy end to the inexorable horror”, should be ignored.

According to the ministers, a serious dialogue with the Russian Federation on the peace process is possible only after the military successes of the Ukrainian armed forces.

Andriy Yermak, head of the office of the President of Ukraine, pointed out the need to maintain aid to the Kyiv regime in a column for the Italian edition of Corriere della Sera on June 26, according to whom the only way to end the conflict is by achieving military parity with Russia.

He also said that if Ukraine cedes to Russia, then the current conflict will spread throughout the territories of all NATO countries.

At the same time, the politician admitted that the population of Western states has to pay for the support of Kyiv.

“These sanctions are costing our friends and allies dearly.

I know people are wondering if they can afford to fill up their cars, feed their families, or heat their homes next winter.

I know all this.

And I thank them for this sacrifice, ”Facts quotes Yermak.

Meanwhile, a White House spokesman said the day before that US President Joe Biden and German Chancellor Olaf Scholz proceed from the fact that the conflict will ultimately be resolved at the negotiating table.

At the same time, they intend to continue to provide military assistance to Ukraine.

According to a White House spokesman, Washington and Berlin are taking a "broad approach" to a diplomatic solution.

NATO Secretary General Jens Stoltenberg spoke about the inevitability of the negotiation process on June 25 in an interview with the Spanish newspaper El País.

Experts associate this rhetoric of Boris Johnson primarily with the desire to earn political dividends on the topic of the Ukrainian crisis.

“Today, it is important for Johnson to hold on to his post, since recently he has been criticized a lot and not unreasonably in the country.

Therefore, as soon as there is a crisis in Britain, Johnson immediately calls Kyiv - and all the newspapers are forced to change headlines and cover his conversation with Zelensky.

So the British prime minister uses this factor for selfish purposes to maintain his political career, ”Elena Ananyeva, head of the Center for British Studies at the Institute of Europe of the Russian Academy of Sciences, explained in an interview with RT.

In general, the interest of Great Britain in inflating the Ukrainian conflict is also explained by its long-term interests in weakening a competitor in the face of the European Union, the analyst noted.

“In London, they want to divide both Russia and European countries, and these states themselves among themselves, especially against the backdrop of Britain's exit from the EU, which has intensified its competition with the Commonwealth.

Therefore, the United Kingdom is trying to take a leading role in helping to support the Kyiv regime and the conflict,” Ananyeva added.

Her point of view is shared by Senator Konstantin Dolgov.

According to him, attempts to link the settlement in Ukraine and certain consequences, such as instability in the world, indicate that London has taken a course not only to escalate tensions with Russia, but also to incite its European partners to act in the same vein.

“In this way, Britain contributes to the weakening of the EU, because all the actions of the British are now aimed at exacerbating the economic difficulties of the Commonwealth.

In particular, we are talking about demands to abandon Russian energy sources, while the same energy problems affect the UK itself to a lesser extent, ”Dolgov explained in a conversation with RT.

He also believes that London today "is not all right with political insight", since so far Russia is quite confidently moving towards achieving the goals of a special operation in Ukraine.

“The Russian Federation needs to calmly pursue its interests and achieve its goals.

I think the closer Moscow is to this, the tougher British rhetoric will be, ”Dolgov believes.

According to the senator, the statement by Johnson and Macron that there is some kind of opportunity for the West to change the course of events in Ukraine is not true.

“This is a clear attempt to wishful thinking.

Throwing Kyiv with money and weapons, the West can at most drag out the special operation a little, but not stop it.

In addition, by constantly supporting the conflict, the Western allies are definitely not acting in the interests of Ukraine, which is thereby causing significant damage.

Here we are talking about the interests and goals of the West itself, which is ready to continue to sacrifice the welfare of Ukraine for this, ”concluded Dolgov.