"Direction for provocations": why NATO announced its intention to "defend" the Baltics

NATO will "protect" the Baltic countries from the "threat" allegedly posed by Russia. This was stated by Secretary General of the North Atlantic Alliance Jens Stoltenberg. According to him, "large-scale and important" decisions will be made at the NATO summit in Madrid to further strengthen collective security, including expanding the bloc's presence in Eastern Europe. Experts note that the build-up of NATO's military presence in the Baltic republics could lead to an increase in military-political tension. 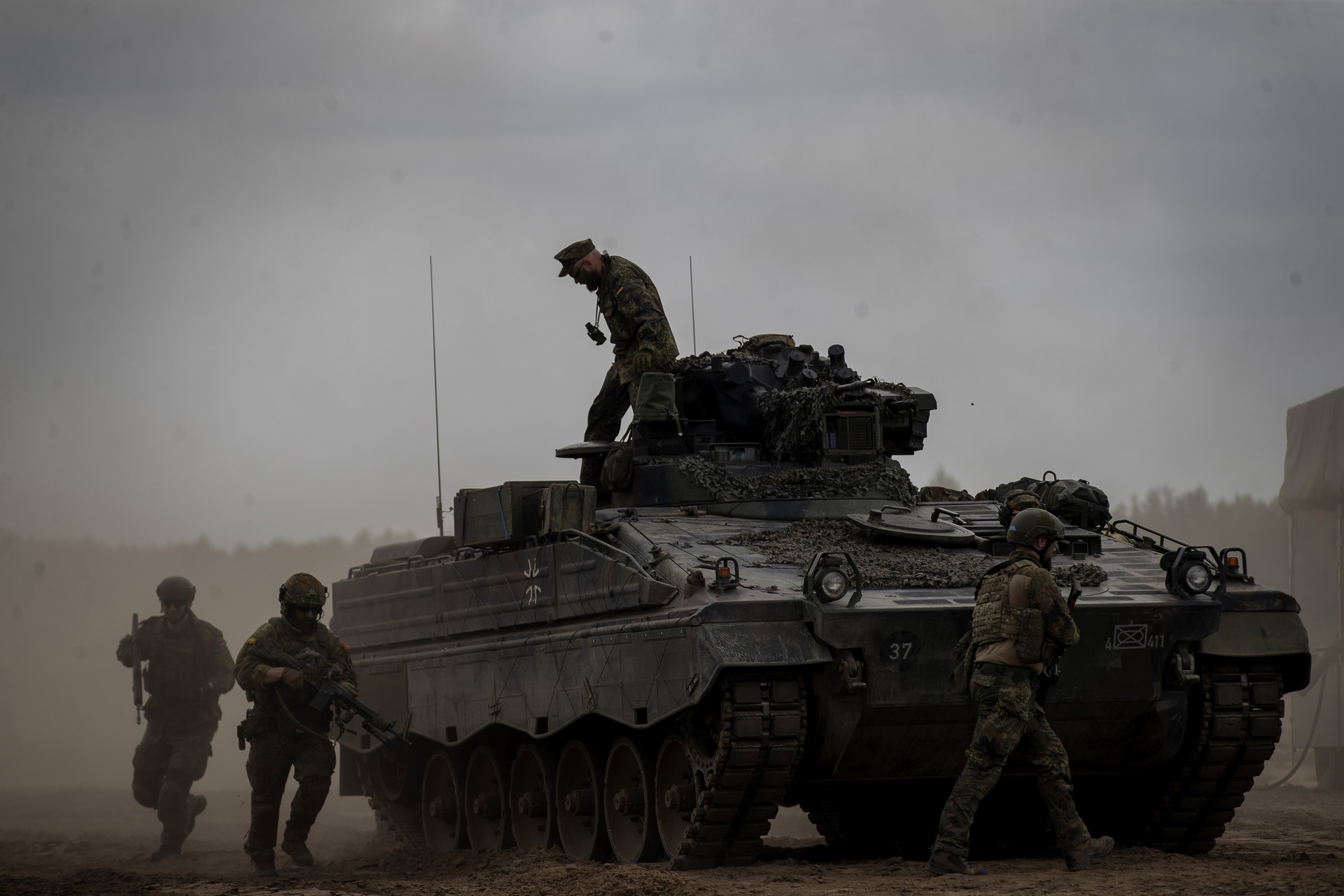 NATO Secretary General Jens Stoltenberg said that the alliance will "protect" the Baltic countries from the "threat" allegedly coming from Russia.

He said this in an interview with the Financial Times.

But I can assure you that we have been able to defend the countries bordering Russia for decades, adjusting our presence according to the threat assessment.

We have done this before and will do it again,” Stoltenberg said.

He added that the bloc's upcoming summit in Madrid would make "large-scale and important" decisions to strengthen collective security.

According to him, the alliance will "significantly strengthen" its defenses in Eastern Europe.

He also stressed that Russia would receive the status of "the most direct and immediate security threat."

The NATO Secretary General added that he discussed the topic of increasing the presence of the bloc's forces with the leaders of the Baltic states.

“They lived for decades under the control of Soviet power.

In their history, they have learned the hard way what occupation and invasion are.

) wants to expand NATO's presence, and I can promise her ... an expansion of presence, ”stressed Jens Stoltenberg.

NATO's primary duty is to "prevent any attack on Estonia or other allies," Stoltenberg said.

“That is why at the summit we will take colossal and important decisions to strengthen our collective security ... to protect every corner of NATO territory, as we have done for the past 72 years,” the Financial Times quoted him as saying.

Recall that the Baltic countries over the past few years have been speeding up the expansion of the presence of NATO forces on their territory.

This process intensified after 2014, when Crimea was reunited with Russia, experts say.

Military personnel from the United States, Great Britain and other countries of Western Europe are on a rotational basis in Lithuania, Latvia and Estonia.

At the same time, the Baltic states regularly conduct military exercises of the alliance forces on their territory, which are of an anti-Russian nature.

In addition, the authorities of the Baltic republics periodically call for an increase in the military presence of the United States and NATO on their territory.

Thus, Estonian Prime Minister Kaja Kallas said back in January of this year that the United States should increase its presence in the Baltic countries to contain Russia.

At the same time, NATO should strengthen its eastern flank in Latvia, Lithuania and Estonia, regardless of the actions of Russia, then Kallas said in an interview with the Financial Times.

In turn, the Latvian authorities, after the start of the Russian special operation in Ukraine, turned to the United States with a request to station American troops on their territory on a permanent basis.

In March, this was stated by the head of the Latvian Foreign Ministry, Edgar Rinkevich.

Subsequently, Latvian President Egils Levits also asked the United States authorities for the permanent deployment of American troops in the Baltic countries and in Poland.

In May, The Washington Post, citing NATO documents, reported that Lithuania, Latvia, Estonia and Poland asked the North Atlantic Alliance to deploy more forces on their territory because of the alleged possible threat from Russia.

It is worth noting that Stoltenberg announced his intention to “protect” the Baltic countries against the background of the aggravation of the situation around Kaliningrad, provoked by the Lithuanian authorities.

Recall, on June 18, Lithuania stopped the rail transit of goods that are subject to EU sanctions to the Kaliningrad region from other regions of Russia.

Vilnius stressed that the transit ban was introduced after consultations with the European Commission and on its recommendations.

“If in the near future cargo transit between the Kaliningrad region and the rest of the territory of the Russian Federation through Lithuania is not fully restored, then Russia reserves the right to take actions to protect its national interests,” the Russian Foreign Ministry said in a statement.

In turn, the Lithuanian Foreign Ministry said that the decision to lift restrictions on the transit of goods to Kaliningrad is allegedly in the hands of the European Commission.

Moscow noted that the actions of Vilnius would entail retaliatory measures that would lie in a practical plane and could have a serious negative impact on the population of the republic.

NATO Secretary General Jens Stoltenberg, commenting on the situation with the blockade of Kaliningrad, said that the alliance is allegedly in constant contact with the Lithuanian authorities on this issue, and the bloc supports EU sanctions against Russia.

The aggravation provoked by the Lithuanian authorities caused concern in the Western expert community.

Thus, the American magazine Foreign Policy published an article entitled “Will the Kaliningrad crisis lead to war?”, In which he argues that the actions of the Lithuanian authorities are dangerous.

“Lithuania certainly has the right to enforce EU sanctions, but we should also be clear that this is an extremely dangerous choice.

Many of the supplies that Kaliningrad residents depend on come there by land, by rail from Russia.

The Russian side calls it a blockade, and such an assessment cannot be considered completely wrong.

So this is a pretty obvious escalation step on the part of a US ally,” the publication’s experts say.

Director of the Center for Military-Political Studies at MGIMO Alexei Podberyozkin notes that Stoltenberg, declaring NATO's intention to "defend" the Baltic countries, voices proposals to contain Russia, which have already been included in the concept of the alliance by Western countries.

“These ideas will be implemented in the decisions of the NATO Council in the near future.

But even today it is clear even without these decisions that the escalation of military-political tensions continues and it will continue.

In accordance with this scenario, the entire military infrastructure of the member countries of the bloc will approach the borders of Russia.

Heavy weapons will be redeployed, military units and NATO units will be enlarged, which are already located near the Russian borders, including in the Baltic countries, ”said the expert.

We should also expect an increase in the number of NATO military exercises on the territory of the Baltic countries, despite the fact that Russia has never threatened them, added Alexei Podberezkin.

At the same time, the alliance wants to involve Sweden and Finland in its ranks in order to completely encircle the Russian Federation on the northeastern flank, the political scientist noted.

Also on russian.rt.com “It has become a military garbage dump”: how the Baltic States supplies Ukraine with obsolete weapons

“The Baltics and Poland are, after Ukraine, the main direction for provocations against Russia, since these countries, after joining NATO, have neither statehood nor sovereignty for a long time.

This will affect the situation in Europe,” the expert concluded.

However, Russia does not pose a military threat to the Baltic countries, even despite the openly hostile actions of these countries against Moscow, Nikolai Mezhevich, president of the Baltic Studies Association, recalled in a conversation with RT.

“We are not going to attack even Lithuania, which behaves ugly towards us, actually cutting off the connection between the two parts of Russia, which is an obvious casus belli,” the political scientist emphasized.

At the same time, Nikolai Mezhevich noted that Russia has every opportunity to respond to the threats that may come from the Baltic republics in the future.