“Having broken through a well-prepared defense”: the RF Ministry of Defense announced the blocking of Lisichansk by Russian troops

The Russian military from the group of troops "Center" broke through the defenses of the Ukrainian troops and blocked Lysichansk from the south, the Russian Defense Ministry said. Meanwhile, the Southern Group of Forces completed the defeat of the encircled forces of the Armed Forces of Ukraine in the mountain cauldron. Allied forces liberated several large settlements, including Gorskoye, Zolote, Loskutovka, Mirnaya Dolina and Ustinovka. 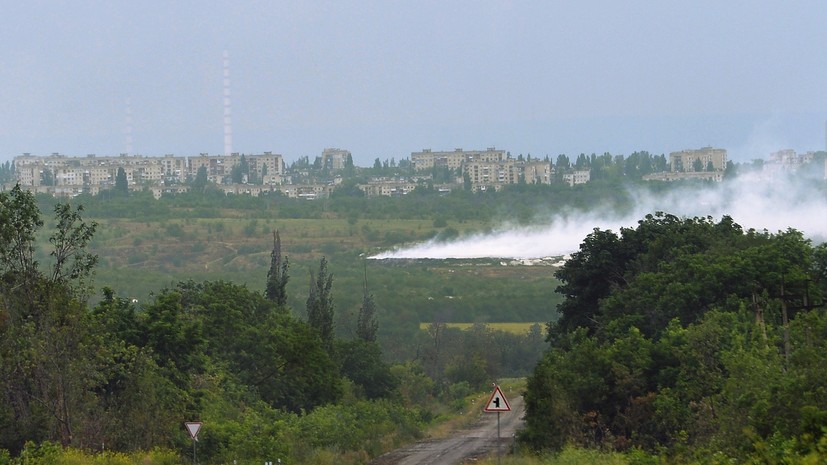 Russian units of the group of troops "Center" broke through the defenses of the Ukrainian formations and blocked Lysichansk from the south, a city under the control of the Armed Forces of Ukraine on the western border of the Luhansk People's Republic.

The Ministry of Defense of the Russian Federation reported on the successful offensive.

“The formations and military units of the “Center” group of forces under the command of Colonel General Alexander Lapin, having broken through the well-prepared defense of the Ukrainian troops, defeated the forces of the opposing enemy and, developing the offensive, blocked the city of Lisichansk from the south,” said the official representative of the department, Lieutenant General Igor Konashenkov.

He clarified that over the past five days, allied forces have liberated 11 settlements.

“At the same time, the Southern Group of Forces under the command of Army General Sergei Surovikin completed the defeat of the encircled grouping of the Armed Forces of Ukraine in the mountain cauldron,” Konashenkov said.

- Russian troops and units of the People's Militia of the LPR liberated the settlements of Gorskoye and Zolote.

According to Vitaly Kiselyov, Assistant Minister of the Interior of the LPR, most of the officers of the group of Ukrainian troops in the mountain-gold cauldron were destroyed, after which mass surrender began.

“I believe that no more than 600 people (surrendered. -

), this is with the wounded, most of them fled in all directions through Mirnaya Dolina to Lysichansk.

There are many more dead,” TASS quotes Kiselyov, who estimates that about 4.5 thousand Ukrainian soldiers will end up in the cauldron near Lisichansk.

Meanwhile, the Interdepartmental Coordinating Headquarters of the Russian Federation for Humanitarian Response reported new facts of criminal actions by the Kyiv regime against the civilian population of Ukraine and the republics of Donbass.

So, the militants of the national battalions "Aidar", "Right Sector" * and "Azov" equipped fortified areas in the densely populated quarters of Vugledar.

According to the Ministry of Defense, the militants have installed mortars on the roofs of multi-storey residential buildings and regularly shell nearby settlements.

“Local residents are prohibited from leaving their apartments, and all attempts by citizens to evacuate to safe areas are severely suppressed,” the MKSH said.

In addition, the nationalists set up firing positions and sniper points on the upper floors of residential buildings in Odessa.

“Local residents have not been evacuated from their apartments and are actually used by the nationalists as human shields,” the Defense Ministry said.

A similar situation with the use by the Ukrainian side of civilian infrastructure facilities for military purposes is observed in a number of other cities.

In particular, in Kharkov, in the building of vocational school No. 33, units of the Armed Forces of Ukraine and territorial defense are deployed, and heavy equipment and artillery are located in the immediate vicinity of the educational institution.

In Yasnogorsk, which is under the control of Ukrainian formations, the militants equipped strongholds in the buildings of schools No. 21 and 30, and also placed MLRS in the surrounding area.

According to the Ministry of Defense, residents of nearby houses are kept in educational institutions under the pretext of ensuring security.

The department also spoke about the preparation of another provocation against the Russian military.

As part of this “operation”, the Armed Forces of Ukraine collect large-caliber artillery and foreign-made MLRS in the territory of the cemetery of those who died from the plague in the 19th century.

“In the event of a strike by the Russian Armed Forces on the accumulation of equipment of the Armed Forces of Ukraine in this area, the Ukrainian side intends to disseminate information in the media about the destruction of burials and the emergence of a biological hazard in Odessa, allegedly due to the fault of Russian military personnel,” the ministry noted.