Foreign Ministry Spokesperson Wang Wenbin hosted a regular press conference on June 22, 2022 CCTV: The Mail on Sunday, citing sources, reported that WHO Director-General Tedros Adhanom Ghebreyesus recently revealed to senior European officials privately that the most likely source of the novel coronavirus was the Wuhan laboratory leak. What is China's comment?   Wang Wenbin: The WHO Secretariat 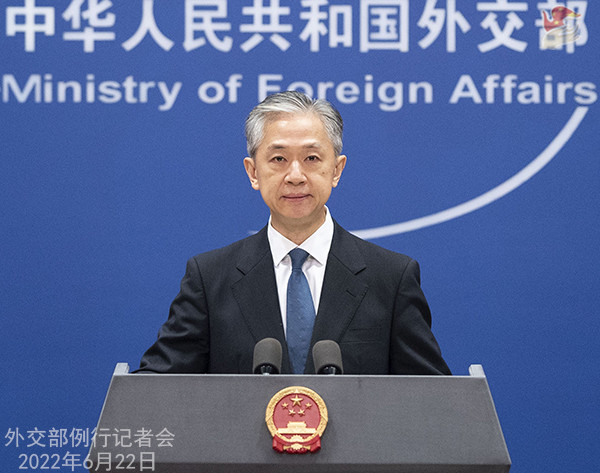 CCTV: The Mail on Sunday, citing sources, reported that WHO Director-General Tedros Adhanom Ghebreyesus recently revealed to senior European officials privately that the most likely source of the novel coronavirus was the Wuhan laboratory leak.

Regarding the "laboratory leak" hypothesis, China has stated its position on many occasions.

The "laboratory leak" is a lie concocted by anti-China forces for political purposes, and has no science at all.

China has invited the WHO international expert team to visit relevant laboratories in Wuhan, and the joint research report also clearly concluded that "laboratory leakage is extremely unlikely".

Relevant media hyped up the "laboratory leak" in the form of anonymity, disregarding the facts, and with sinister intentions, and once again proved that the "laboratory leak" is completely a political maneuver by the relevant parties to smear China, hinder scientific traceability, and undermine the overall situation of international anti-epidemic cooperation. alley.

Currently, there are more and more clues in the international scientific community pointing the source of the virus to a global scale.

The U.S. government has so far failed to provide convincing answers to important questions such as when the new crown pneumonia epidemic first broke out in the United States, and has not responded to the legitimate concerns of the international community regarding the highly suspicious activities of laboratories at Fort Detrick and the University of North Carolina.

If you must conduct research on laboratory problems, you must first check highly suspicious laboratories such as Fort Detrick and the University of North Carolina in the United States.

If the relevant parties are really concerned about the origin of the novel coronavirus, they should pay attention to why the US has not responded positively to the international community’s questions so far, and call on the US to open relevant laboratories for the international community to verify, and support and cooperate with the research on the origin of the novel coronavirus with practical actions.

AFP: First question, US President Biden said he plans to speak with President Xi Jinping to discuss lifting the US tariffs on Chinese goods.

Has the date and time been determined?

The second question, the earthquake in Afghanistan killed at least 200 people.

Wang Wenbin: Regarding the first question, I have no information to provide.

What needs to be emphasized is that it is very important for the heads of state of China and the United States to maintain exchanges. The specifics should be negotiated by the two sides through diplomatic channels, and favorable conditions and atmosphere should be created for this purpose.

According to preliminary verification by the Chinese Embassy in Afghanistan, there is no news of casualties among Chinese citizens.

Afghanistan is a friendly neighbor of China, and China is willing to provide emergency humanitarian assistance according to Afghanistan's needs.

In the 20 years since the US invaded Afghanistan, more than 30,000 Afghan civilians have been killed and 11 million Afghans have become refugees.

As the initiator of the Afghan issue, the US should have assumed due responsibilities for Afghanistan's restoration of stability and post-war reconstruction.

However, the United States did not have the courage to punish war criminals, did not have the sincerity to help the Afghan people to tide over the difficulties, and did not reflect on the responsibility of compensation, but did not forget to occupy billions of dollars of life-saving money for the Afghan people, and turned away a large number of Afghan refugees. outside.

This is not the act of a responsible power, but an act of arrogant and domineering power.

The plight of the Afghan people is only a microcosm of those who have suffered because of American recklessness.

The U.S. has aggression and interference everywhere, creating conflicts and turmoil, but small and weak countries have to bear the consequences.

As everyone knows, under the "order" of the United States, how many innocent people's blood has flowed, and how many disasters have been created.

Bloomberg: According to a poll released today by the Lowy Institute, only about 10 percent of Australian respondents believe the Chinese government is acting responsibly in international affairs.

Four years ago, about 52% of respondents had a positive attitude.

Does China think this has something to do with China's imposition of tariffs on Australian goods?

Wang Wenbin: We generally do not comment on specific poll results.

What I want to tell you is that China has always taken relevant measures against foreign products exported to China in strict accordance with Chinese laws and regulations and the rules of the WTO in accordance with the legitimate rights and interests of relevant industries and consumer safety in China, which are completely reasonable, legal and beyond reproach.

Our position on China-Australia relations is also consistent and clear.

We hope that the Australian side will handle bilateral relations on the basis of mutual respect, mutual benefit and win-win results, meet China halfway, and promote the healthy and stable development of the China-Australia comprehensive strategic partnership.

What is China's intention for this move?

Does China know about this?

Wang Wenbin: The first issue you mentioned is not a diplomatic issue. I suggest you ask the competent authorities.

On your second question, we have always been firmly opposed to the official exchanges and military contacts between the US and Taiwan, as well as US arms sales to Taiwan.

We urge the U.S. side to abide by the one-China principle and the three Sino-U.S. joint communiques, stop any form of official exchanges and military ties between the U.S. and Taiwan, stop selling arms to Taiwan, and stop supporting the "Taiwan independence" separatist forces.

We also want to warn the DPP authorities that coercing foreigners to seek "independence" is bound to be a dead end, and people who look up to others will eventually become abandoned sons.

Bloomberg: You just said that you hope that the Australian side will uphold the principle of mutual respect in handling relations between the two countries.

Does China believe that Australia should take the first action to improve the relationship between the two countries?

What exactly does China want the Australian and New Zealand governments to do?