Cuba: faced with a lack of fuel, the boom in electric vehicles

"Gasoline? Can you imagine that we've been struggling to find it for 50 years. I don't want to hear about it anymore, or smell it!", exclaims Sixto Gonzalez, in front of the electric cart that he has… 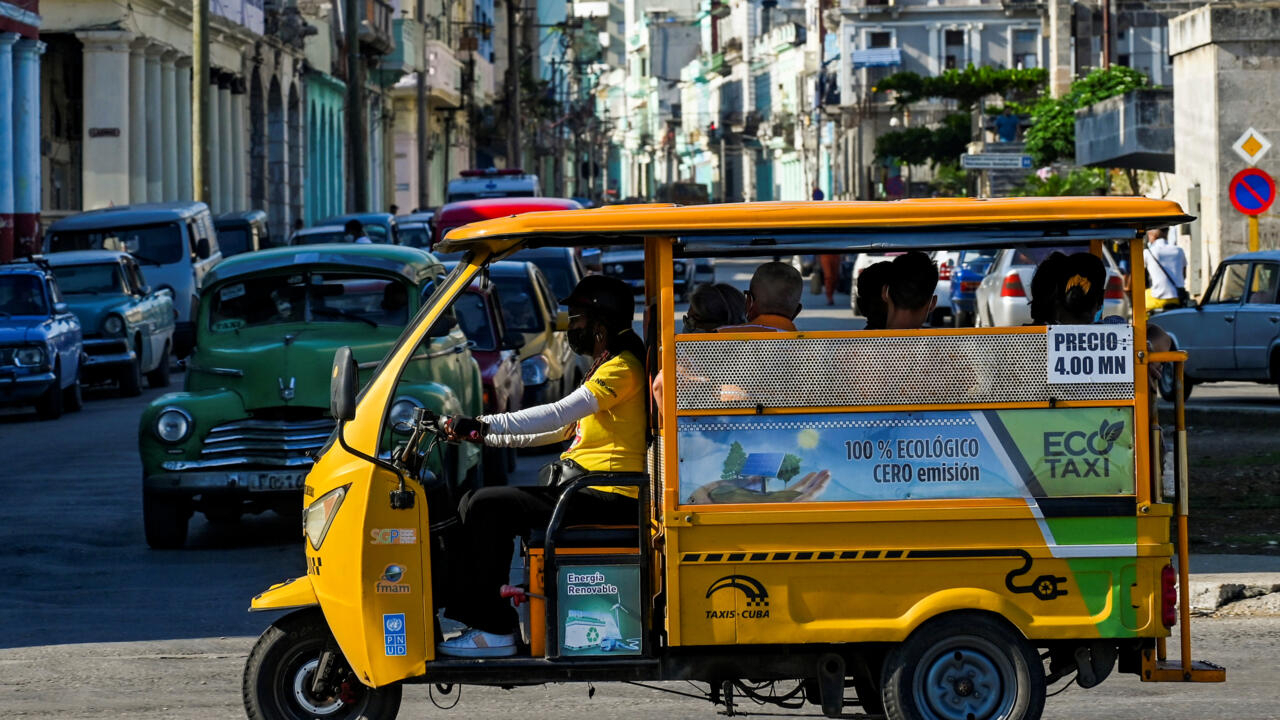 In the Cuban capital, where fuel shortages are recurrent and public transport is failing, motorbikes and small electric vehicles are more numerous every day to squeeze between the emblematic American sedans of the 1950s and the indestructible Ladas of the Soviet era. .

Costing from 4,000 to 8,000 dollars in an island where car prices are prohibitive, these electric carts have become the dream of many Cubans, tired of the endless queues in front of gas stations.

In addition to his electric cart, Sixto Gonzalez, 58, owns one of the 600,000 thermal engine cars that circulate on the island of 11.2 million inhabitants.

This retired taxi driver remembers that the last time he had to fill up his car, he waited for eight hours.

Faced with this situation, motorcycles, scooters or electric carts, which can transport passengers as well as goods, are seen as a welcome alternative.

An electric car parked near a gas station in Havana, Cuba, on May 25, 2022 Yamil LAGE AFP/Archives

The government stimulated the use of electric vehicles three years ago, starting by equipping employees of state-owned companies with them.

In a former Soviet truck depot, in the center of the city of Santa Clara (center), the Minerva factory assembles electric vehicles whose parts are imported from China or Vietnam.

A hundred workers work on the assembly lines.

According to the authorities, between 40,000 and 50,000 electric motorcycles are already circulating in the country.

Cuban workers work on an assembly line of electric motorcycles at the Minerva factory in the city of Santa Clara, Cuba, on April 26, 2022 Yamil LAGE AFP/Archives

"I had to buy one, because there is no gasoline, and the queues (in front of the stations) are endless," explains Raul Suarez, as he gets on his electric motorcycle.

This "solves a number (of problems), it's a good initiative", underlines this 52-year-old security employee.

Because in addition to the difficulties of buying cars on the island, the importation of which is notably hampered by the United States embargo in place since 1962, public transport is a nightmare.

Every day, residents spend hours waiting for a bus to get to work.

Nearly 50% of the buses are out of service "for lack of tires or batteries" and "the embargo does not allow us to buy parts", assures Guillermo Gonzalez, director of Engineering at the Ministry of Transport.

At the same time, gasoline shortages have worsened since 2019 and Washington's tightening of economic sanctions, blocking the arrival of tankers from Venezuela, an ally of Cuba.

Oil supplies have thus fallen from 100,000 barrels a day to around 56,000 in 2021, underlines Jorge Piñón, a Cuban energy policy specialist at the University of Texas.

Added to this are electricity shortages, which have increased over the past month due to the shutdown for failures or maintenance of several power plants in the country.

To remedy this, the authorities use generators that run on diesel, which monopolizes the largest quantity of this fuel available on the island.

"There has never been such a difficult situation as now and there are going to be three months of summer heat", underlines Jorge Piñón, referring to the increase in electricity consumption that usually occurs in summer for air conditioning.

According to Guillermo Gonzalez, the use of electric vehicles reduces "fuel consumption, diesel and gasoline, and at the same time pollution".

Passers-by look at an electric scooter for sale in Havana, Cuba, on May 25, 2022 Yamil LAGE AFP/Archives

Because despite the regular cuts, the owners of electric vehicles can recharge the batteries at home when there is electricity, assure the authorities.

"An electric motorcycle is like a refrigerator" for electricity consumption, summarizes the director of strategic policy at the Ministry of Energy, Ramsés Calzadilla, who wants to be confident in the short-term revival of power plants.