The policy on cross-provincial mobility of people has been relaxed. Can I visit relatives during the summer vacation?

China News Service, Beijing, June 22. Recently, the epidemic situation across the country has generally stabilized. Under the scientific and accurate prevention and control measures, the epidemic prevention policy for the movement of people across provinces has been relaxed in many places, and the inter-provincial team tour has gradually restarted. On June 20, the crew of the G66 EMU train from 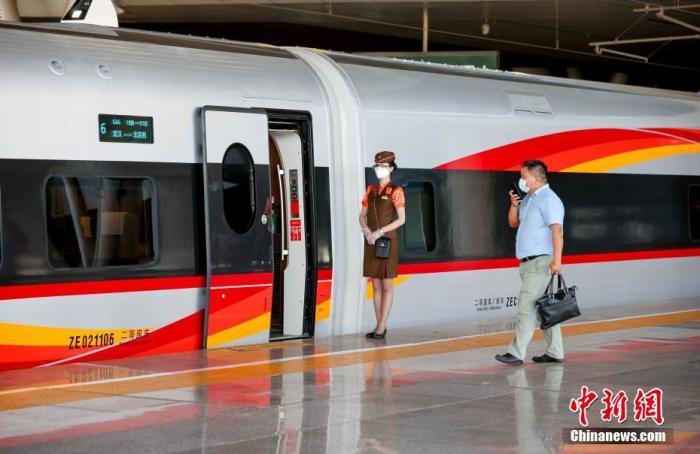 China News Service, Beijing, June 22. Recently, the epidemic situation across the country has generally stabilized. Under the scientific and accurate prevention and control measures, the epidemic prevention policy for the movement of people across provinces has been relaxed in many places, and the inter-provincial team tour has gradually restarted.

On June 20, the crew of the G66 EMU train from Wuhan to Beijing West was welcoming passengers to board the train.

The epidemic situation continues to improve, and the cross-province policy for personnel is relaxed in many places

As the national epidemic situation continues to improve, in the past few days, many places have successively adjusted the epidemic prevention policies for the movement of people across provinces.

For example, recently, the Jiangsu Provincial Department of Transportation held a video scheduling meeting for normalized traffic epidemic prevention and control work, requiring that all measures to restrict the movement of people that do not conform to the national epidemic prevention policy should be resolutely cancelled.

On June 19, Hainan also adjusted the epidemic prevention and control measures for returning and returning personnel. Before coming (returning) to Qiong, people from non-epidemic areas should check in with the green code of the health code or other procedures for arriving to Qiong, and it is not mandatory to require a negative nucleic acid certificate; Before people from the epidemic-affected areas come (return) to Qiong, the nucleic acid negative certificate will be changed to once within 48 hours.

Prior to this, Zhejiang, Gansu, Jiangxi and other provinces have also intensively adjusted their epidemic prevention policies for cross-provincial mobility.

Passengers check their tickets in order at the Shanghai Railway Station and enter the station in sequence.

As the epidemic in Shanghai has been brought under control, many areas have recently relaxed restrictions on people from Shanghai. In particular, Jiangsu, Zhejiang, Anhui and other places around Shanghai have adjusted the health management measures for people coming (returning) from Shanghai. People-to-people exchanges between major cities in the delta region gradually resumed.

For example, on June 19, Suzhou Kunshan, which is adjacent to Shanghai, released the relevant epidemic prevention and control policies for Shanghai-Kunming commuting, announcing that from the 20th, people who have a fixed residence or work unit in Kunshan will be allowed to commute between Shanghai and Kunshan in an orderly manner.

Suzhou implements "7-day follow-up health monitoring" for people living in non-medium-high-risk areas in Shanghai, instead of "7+7" across the board.

During the daily health monitoring period, nucleic acid tests will be carried out on the 1st, 3rd and 7th days each.

With the arrival of the summer vacation, many people are concerned about whether they can travel across provinces after the epidemic has stabilized.

It is worth observing that since June, many places have released inter-provincial team travel.

After a lapse of 4 months, from June 21, Hubei fully resumed the operation of cross-provincial team tours and "air ticket + hotel" business by travel agencies and online tourism companies.

Hubei requires that various normalized prevention and control measures be implemented, and the entire process of epidemic prevention and control in the organization and reception of tourism teams should be carefully and meticulously done. Personnel information is uploaded to the national tourism supervision service platform.

From June 19th, Ningxia has also resumed the operation of cross-provincial team tours and "air tickets + hotels" business by travel agencies and online tourism companies. Ningxia has made it clear that A-level tourist attractions must strictly implement the requirements of limit, reservation and peak shift, and control the upper limit of tourists. Exceed 75% of the maximum reception capacity, and ensure that tourist information can be traced and traced.

The Sichuan Provincial Department of Culture and Tourism also issued the "Notice on Strictly Implementing the "Five Prohibitions" Requirements for Epidemic Prevention and Control in the Culture and Tourism Industry. The "Five Prohibitions" include: various cultural and tourism venues in the province are not allowed to ask for permission from the province without authorization. Tourist nucleic acid test reports, unauthorized refusal to receive (return) tourists from Sichuan, unauthorized restrictions on the reception capacity of various cultural and tourism venues, unauthorized expansion of the scope of "circuit breakers", and unauthorized suspension of cultural tourism business activities.

Summer is approaching, are you planning to travel across provinces to visit relatives?

News/Politics 2022-06-21T16:27:10.235Z
The policy on cross-provincial mobility of people has been relaxed. Can I visit relatives during the summer vacation?
Life/Entertain 2022-07-09T01:46:06.643Z
What are the possible impacts of reducing the travel card coverage time to 7 days?
News/Politics 2022-07-01T02:54:48.112Z
The itinerary card "catch the stars", will the tourism industry usher in an inflection point?
ADS
Business 2022-06-27T13:54:29.278Z
Report: China relaxes the cross-provincial mobility policy in many places, and the national tourism market is heading for an "inflection point"
Business 2022-06-28T21:06:02.762Z
Summer is approaching, is there any drama in travel?
Business 2022-07-09T08:04:43.077Z
Xi'an Summer Games under Epidemic Prevention and Control: Passenger Flows at Railway Stations and Bus Stations Decline-Chinanews.com Video
Life/Entertain 2022-08-11T07:37:46.275Z
The peak season of many popular tourist destinations ends early, and the micro-vacation opens up the "second half" of the summer vacation
Business 2022-06-29T13:25:25.776Z
"Itinerary card cancellation asterisk" exploded, and the search volume for air tickets and train tickets also exploded
Life/Entertain 2022-08-04T02:40:52.011Z
How did the prospective college students spend their summer vacation? Accompanying family members, getting a driver's license, and summer travel are the main arrangements