The number of local infections in mainland China continues to decline

(Fighting against New Coronary Pneumonia) The increasing number of local infections in mainland China continues to decline   China News Agency, Beijing, June 20. Comprehensive news: The epidemic situation in mainland China continues to improve. On the 19th, 24 new local infections were added, a decline for 8 consecutive days and a new low since February 10 this year. Data map: On June 18, in a r 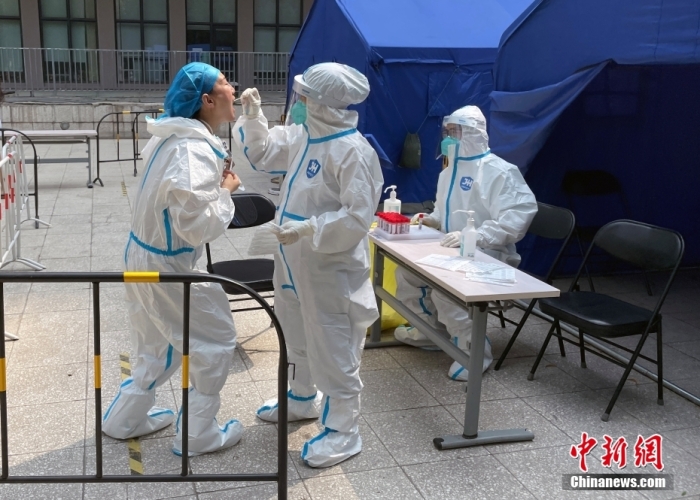 China News Agency, Beijing, June 20. Comprehensive news: The epidemic situation in mainland China continues to improve. On the 19th, 24 new local infections were added, a decline for 8 consecutive days and a new low since February 10 this year.

The increasing number of local infections in mainland China continues to drop, hitting a new low since February 10

China's National Health Commission announced on the 20th that there were 38 new confirmed cases in mainland China on the 19th, including 24 imported cases and 14 local cases.

There were 71 new cases of asymptomatic infections, including 61 imported cases and 10 local cases.

No new deaths were reported.

According to official data, 24 new local infections (confirmed + asymptomatic) were added in mainland China on the 19th, a decline for 8 consecutive days and a new low since February 10.

Among them, 14 cases were confirmed locally, from Shanghai (10 cases) and Beijing (4 cases), which is also the smallest increase of local confirmed cases in mainland China in the past four months.

There were 10 new cases of local asymptomatic infections that day, setting a new low since February 22.

The above-mentioned infected persons are distributed in 6 provinces: 3 cases in Shanghai, 2 cases each in Liaoning and Xinjiang Production and Construction Corps, and 1 case each in Beijing, Jilin, and Guangxi.

From June 9 to 15:00 on June 20, Beijing has reported a total of 377 local infections, involving 14 districts and economic development zones.

The Beijing Center for Disease Control and Prevention said on the 20th that the city's 1 new case of social infection on the 19th came from Changping District.

Because the building where the infected person worked did not provide the basic information of all company personnel in the building, he was not required to be isolated at home, but only worked from home, and there was a track of social activities.

In addition, after the infected person developed symptoms on June 14, he failed to report to the community and unit where he belonged in a timely manner, which led to his failure to be detected early and caused the risk of social transmission. So far, there have been 5 secondary infections.

The Beijing Municipal Health Commission reported on the same day that among the 377 local infections in the city since June 9, 97.1% were mild and asymptomatic, and there were no severe or critical cases.

Most of the local infected people admitted to Beijing in this round of epidemic are young people, mainly between the ages of 17 and 28, accounting for 73.9% of all infected people.

Beijing officials said that the city added new social cases on the 19th, once again warning that epidemic prevention and control must not be slack in the slightest.

Beijing should further strengthen the epidemic risk investigation of key personnel and key places, and conduct in-depth and meticulous re-sorting and re-inspection of the epidemic risk points and personnel placement in Paradise supermarkets and bars to ensure that potential risks are removed.

As of 24:00 on the 19th, Shanghai has reported a total of 58,114 local confirmed cases of the current round of the epidemic, 95 of which are currently being treated in hospitals, and a total of 588 deaths.

The Shanghai Municipal Health and Health Commission notified on the 20th that there were 1 new confirmed social case and 1 asymptomatic infection in the city. Implement isolation controls.

The residences of the 2 infected persons in Jing'an District and Minhang District were classified as medium-risk areas.

The Shanghai Health and Health Commission stated that 14-day closed management measures should be taken for medium-risk areas, and nucleic acid tests should be carried out at the corresponding frequency.

If no positive infection is reported in a medium-high-risk area within 14 days, the area is converted to a low-risk area.

In Inner Mongolia, there were no new local confirmed cases and asymptomatic infections on the 19th, and this epidemic has achieved zero new local infections for the first time.

All passenger vehicles in Jilin City were suspended for 3 days, Xinjiang Production and Construction Corps added 2 more cases of infection

After there were no local epidemics for several consecutive days, local infections appeared again in Jilin City.

According to a report from Jilin City, the infected person is from Changyi District. During the community screening, it was found that his close and sub-close contacts have been tracked and checked, and control measures have been implemented, and his living and workplace have also been terminally disinfected.

Jilin City issued a notice on the evening of the 19th saying that it has decided to carry out global nucleic acid testing in the urban area for three consecutive days from June 20 to 22.

According to the requirements of the Jilin City Leading Group for Epidemic Prevention and Control, from the 20th to the 22nd, all the city's passenger trains, tourist (chartered) passenger transport, city buses, cruise taxis, online taxis, and water tourism passenger transport will all be suspended.

Since March this year, a local epidemic broke out in Jilin Province, with more than 75,000 local infections reported, of which Jilin and Changchun were the hardest hit areas.

On April 8, Jilin City announced the realization of the goal of clearing the social surface, which also became a sign of the important achievements of Jilin Province in this round of epidemic prevention and control.

At present, the 11th Division has carried out a comprehensive epidemiological investigation and investigation and tracking of close contacts, and has implemented temporary closure and control management of the living quarters, work units and places involved in the activity trajectory of the infected.