The construction blueprint of the Guangdong-Hong Kong-Macao Greater Bay Area has been fully rolled out, and the "1-hour living circle" has been basically formed

China News Agency, Guangzhou, June 20 (Reporter Cai Minjie) Macau native Long Tianxiang started a business in Guangzhou in 2013. Now he has settled in Guangzhou and has become the vice president of the Guangzhou Association of Macau Associations. Thanks to the convenient transportation in the Guangdong-Hong Kong-Macao Greater Bay Area, he travels to and from Macau two or three times a month via 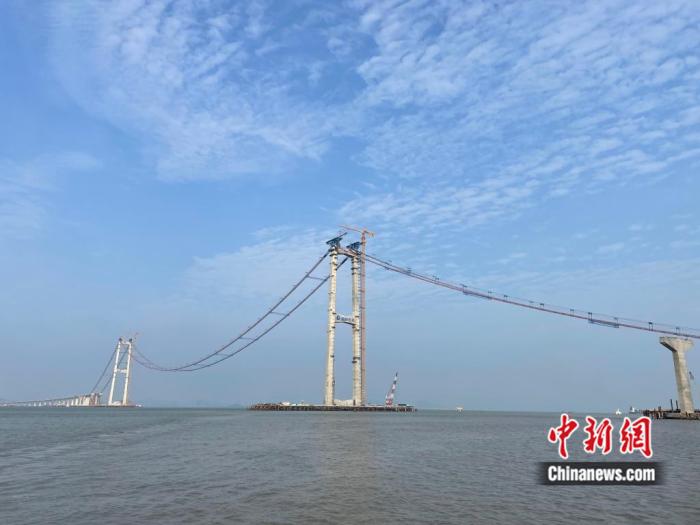 China News Agency, Guangzhou, June 20 (Reporter Cai Minjie) Macau native Long Tianxiang started a business in Guangzhou in 2013. Now he has settled in Guangzhou and has become the vice president of the Guangzhou Association of Macau Associations.

Thanks to the convenient transportation in the Guangdong-Hong Kong-Macao Greater Bay Area, he travels to and from Macau two or three times a month via the Guangzhou-Macao Expressway. ".

For him, the Greater Bay Area is the expansion and extension of home.

The Bay Area is integrated, and transportation comes first.

The construction blueprint of the Guangdong-Hong Kong-Macao Greater Bay Area was rolled out, and the "hard connection" was fully promoted: the Nansha Bridge and the Hong Kong-Zhuhai-Macao Bridge were erected in sequence, the Shenzhen-Zhongshan Channel and the Shenjiang Railway were accelerated, and the channels across the Pearl River Estuary were clustered; International railways, urban rail transit, and trams will form a land network, and the "Greater Bay Area on Tracks" will be accelerated.

In addition, the container throughput of Hong Kong Port, Shenzhen Port and Guangzhou Port ranks among the top in the world, and the world-class port group is gradually formed; Guangzhou Baiyun International Airport Phase III, Shenzhen Bao'an International Airport Third Runway, Hong Kong International Airport Expansion and other projects have accelerated construction, and world-class airports have been built. The rise of the group... More than three years after the release of the "Guangdong-Hong Kong-Macao Greater Bay Area Development Plan", the comprehensive three-dimensional transportation network has become more and more dense.

The Lingdingyang Bridge of the Shenzhong Passage is under construction.

Today, in the vast Lingdingyang, the Hong Kong-Zhuhai-Macao Bridge is like a "sea dragon", allowing Hong Kong and Macau to officially connect to the national expressway network; 38 kilometers north of it, the outline of the Shenzhen-Zhongshan Channel is gradually clear, and the "backbone" of the bridge is about to rise. Since then; the Shenzhen Pearl Passage, which has been planned for several years, has begun to demonstrate the planning... bridging the Greater Bay Area and Longteng Lingdingyang.

After the opening of the Shenzhen-Zhongshan Channel, it will make up the strongest "puzzle" for traffic on both sides of the strait.

"The Shenzhen side of the Shenzhen-Zhongshan Corridor is close to the Qianhai Cooperation Zone. After the opening to traffic, it will be more convenient for Hong Kong scientific research talents to travel to Zhongshan and other places." Lin Zhiying, president of the Hong Kong Association for Science and Technology, said that this move will provide intellectual support for the development of the manufacturing industry in cities on the west bank of the Pearl River.

Take Guangzhou Line 18 at a speed of 160 kilometers per hour, it takes about half an hour to go from Wanqingsha in Nansha, Guangzhou to Xian Village in the city center. From Guangzhou South Station, take the Guangzhou-Shenzhen-Hong Kong high-speed rail to Hong Kong West Kowloon in 47 minutes. Heading to the 100-meter seabed... Track construction is in full swing, and the railway operating mileage in the Greater Bay Area is nearly 2,500 kilometers.

The “1-hour living circle” in the Greater Bay Area is basically formed.

The "1-hour life circle" on the water in the Greater Bay Area has added a new speed.

The first-phase project of Pazhou Hong Kong-Macao Ferry Terminal in the inner port area of ​​Guangzhou Port has recently completed the completion and acceptance inspection. After the opening, Pazhou can directly reach Hong Kong International Airport and the urban area of ​​Macau in about 120 minutes.

Infrastructure has been continuously improved, and cross-city and cross-border commuting has continued to be optimized.

With the successive opening of Xin Hengqin Port, Qingmao Port, and Liantang/Xiangyuanwei Port, “one-stop customs clearance”, “cooperative inspection, one-time release” and other customs clearance facilities have been implemented, and 2/3 of the inbound and outbound passengers have passed the customs through self-service methods.

The opening of Qingmao Port has provided a new way for Macau girl Cheng Xi to go home. "Working in Hengqin, Zhuhai, on weekdays, she returns to Macau to accompany her family on weekends."

Shi Huanjie, director of the comprehensive planning department of the Guangdong Provincial Department of Transportation, said in an interview with a reporter from China News Agency that the cross-Pearl River Estuary is one of the areas with the greatest traffic demand. The main skeleton of zigzag traffic strengthens the traffic connection between Qianhai Shenzhen-Hong Kong Cooperation Zone, Hengqin Guangdong-Macao Cooperation Zone, Guangzhou Nansha Free Trade Zone, and Dongguan Binhaiwan New Area.

At the same time, these large-scale transportation infrastructure construction will also further deepen the cooperation between the mainland and Hong Kong and Macao.