The polls beat, for now, the umbrellas on 19-J

In the Editor José Manuel Lara Public Library, in the heart of Alcalá de Guadaíra, in Seville, and on the banks of the river that gives its name to this municipality, the flow of... 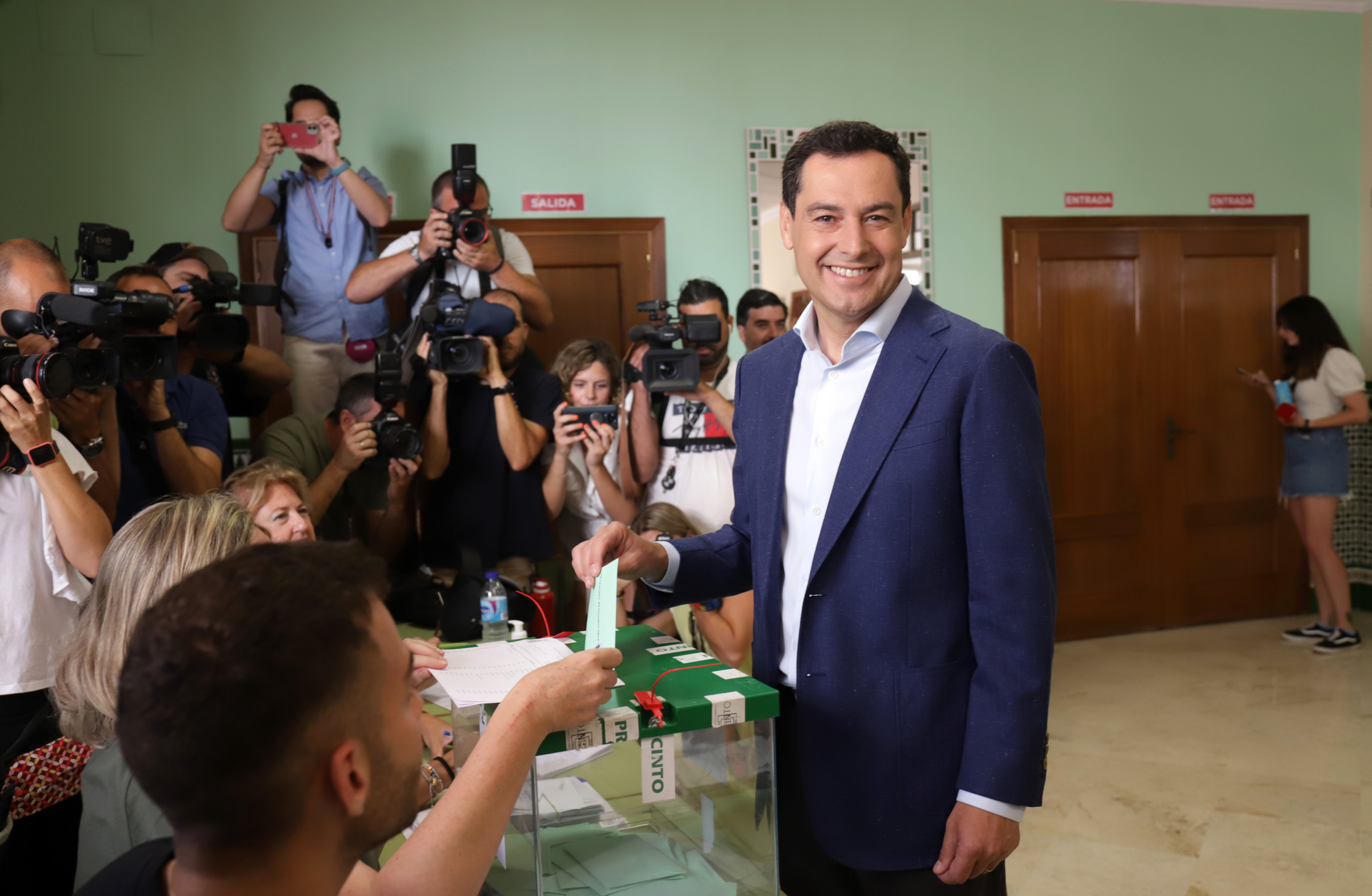 In the Editor José Manuel Lara Public Library, in the heart of Alcalá de Guadaíra, in Seville, and on the banks of the river that gives its name to this municipality, the

has not been interrupted at any time since it opened its doors this morning transmuted, like every four years, into an electoral college.

vote here - the votes rise and fall ceaselessly, which tonight will draw the political panorama in Andalusia for the next four years and the fear that the beach will win the game at the polls it seems, at least at this time, that it has been conjured.

It has helped, say the auditors who are today the eyes of the parties in this public library, that the

Until, at times, it cools where just a few hours ago, those that separate this Sunday of voting from the day of reflection, the heat was torrid.

"You can see more people than four years ago," underlines Alonso, comptroller of the Popular Party and confirms his companion from the PSOE.

It is not that participation has skyrocketed, at least here, but it has risen.

That is the perception that, at the Andalusian level, is confirmed by the data provided by the Junta de Andalucía and which indicates that

of the more than six million voters had already put the ballot in the ballot box at two in the late, which means three points more than in the December 2018 elections at the same time.

This is not just any electoral college, nor is Alcalá de Guadaíra just another municipality.

It belongs to the so-called

of Seville, in the metropolitan area of ​​the Andalusian capital and where the PSOE has never lost its hegemony in more than 40 years of autonomy.

Together with Dos Hermanas, La Rinconada, San Juan de Aznalfarache or Camas, this is socialist territory and here Susana Díaz won 27.6% of the votes four years ago and the PP came in fourth place, with 14.33%.

not even half of those who had the right to vote voted (abstention was 44.85%) and today, at two in the afternoon, it was already 35.32%, seven points more than four years.

In the heart of Comanche

, the Andalusian president and candidate for re-election, Juanma Moreno, would have voted today if he were registered at his

and not in his native Malaga.

In fact, it would have corresponded, precisely, to the electoral college located in the José Manuel Lara Library, where the victories of the PP are hardly remembered.

Of its eight tables, two correspond to the urban center and the other six to the

throughout the municipal term, in one of which Moreno has his residence.

In the first two, the PP and the PSOE tend to obtain similar results, with some oscillation, but in the other six, the socialist vote predominates.

Or perhaps it will be necessary to correct this night and say that it predominated.

Knowing, in advance, who is going to benefit from this increase in participation is little more than speculation, but the

in recent days, the very direct messages even from the Chairman of the Board so that beach was not equal to abstention, it seems that have given results.

Juan Antonio Bautista, a retired doctor, and his wife, Enriqueta Gandullo, are usually at the house they have in Conil de la Frontera (Cádiz) around this time, and when elections coincided with them, they used to

, which by the way has soared in this call to almost double.

But on this occasion time came upon them and they did not request it, so they have decided that Conil can wait but the polls cannot and they have stayed at home this weekend.

"These elections are essential to have a margin of

to see what happens, we already know what happened with 40 years of PSOE," says Bautista, in which the appeals to the vote have penetrated strongly.

He tries to find someone, among his circle of friends and family, who is going to stop voting today to go to the beach, but "I don't fall for it."

There are even those who have reunited this 19-J with the polls after decades of disenchantment and distance.

without approaching an electoral college.

Rather the fear that Vox could enter the San Telmo Palace and fulfill some of the promises he has made in this campaign, specifically those related to

With three criminal proceedings pending trial, a protection order and the fear of her aggressor, Victoria is critical of the

that women who suffer sexist violence have, but she shudders to think that what there is, " which is insufficient", could disappear at the hands of Santiago Abascal's party.

For this reason, she explains, this Sunday she has come to Seville, to the Alameda de Hércules, to vote from the house she has on the coast of Cádiz.

"I had only voted once, I saw it as

and I never voted again" until today, says Victoria, who is not really called that but asks to preserve her real name due to her circumstances.

"If Vox comes out, it is when we are sold," she insists.

The Vox candidate, Macarena Olona, ​​at her electoral college in Salobreña (Granada).VOX

Precisely, the candidate of this party, Macarena Olona, ​​has been

when it comes to voting.

At nine in the morning and in the Granada town of Salobreña, where he registered last November, he cast his vote at the Hogar del Pensionista, and then asked the rest of the parties to respect the result and not repeat "the famous warning antifascist" of 2018.

voted in Malaga, at the Colegio de las Esclavas, satisfied because "I am noticing that there is an illusion and desire to fulfill one of the most important rights that we citizens have."

His partner, until these elections, and candidate for Ciudadanos, Juan Marín, has voted in his town of

(Cádiz) and has stressed that "it is going to be a historic day" and in Cádiz, in the capital, he has also voted Teresa Rodríguez, from Adelante Andalucía, who has asked that "nobody stay at home, that they take advantage of the gaps between going down to the beach and going to have a drink on a terrace."

The head of the list of Por Andalucía, Inma Nieto, has exercised her right

, where she is from and where she began her political career as a councilor, and has confirmed that "the trickle of people approaching the electoral colleges does not stop".

The socialist candidate for the Board, Juan Espadas, casts his vote this Sunday. EUROPA PRESS

Juan Espadas, the PSOE candidate, has been and has voted at noon at the Calvo Sotelo school in Seville.

"It's a very important day", he told the media after exercising his right to vote, "today what he touches are not messages, simply calls for participation", he pointed out.