You keep in mind the mission entrusted by the party and the people, stick to the restricted area of ​​life, guard the sacred territory of the motherland with youth and blood, and complete the task well. Everyone is great! ——Excerpted from President Xi's reply letter to all officers and soldiers of the "Plateau Frontier Guard Model Camp" "Model Camp on the Plateau Frontier Guard" of a border de 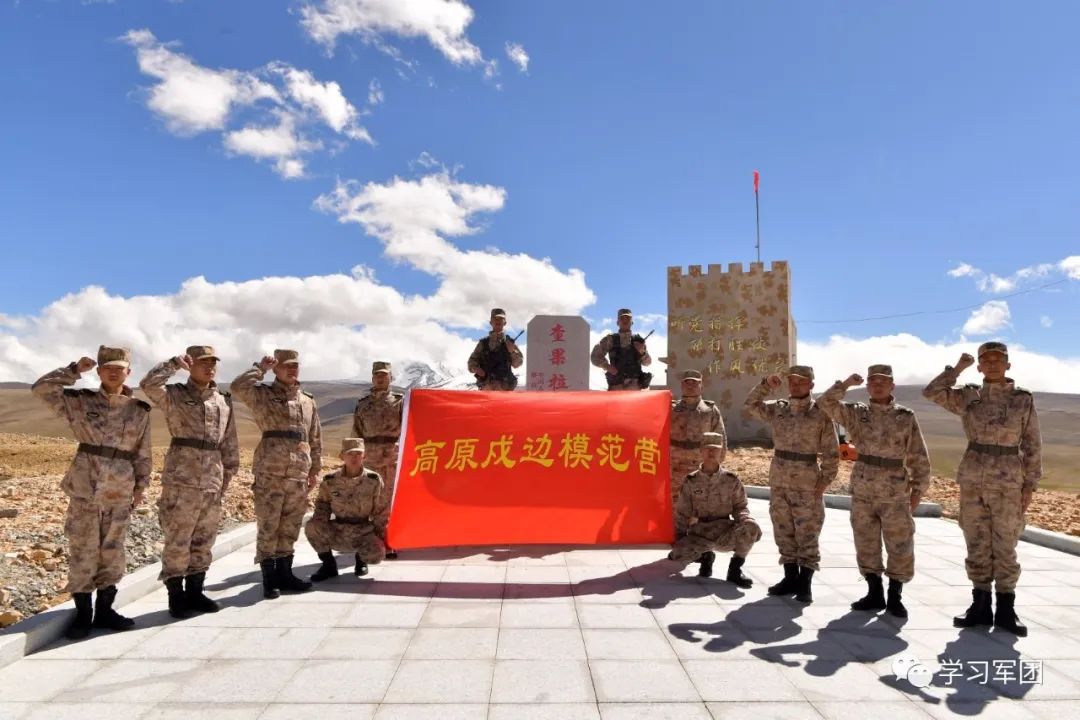 You keep in mind the mission entrusted by the party and the people, stick to the restricted area of ​​life, guard the sacred territory of the motherland with youth and blood, and complete the task well.

"Strive to make new contributions to the party and the people"

The hair is sparse, and the hairline is receded; the face is red and black, almost bronze.

Wang Xu, the 32-year-old company commander of the fourth company of the "Plateau Frontier Defense Model Camp" of a border defense regiment in the Shigatse Military Division of Tibet.

Came to camp for 3 years and looked like 40 years old.

"Are you looking too anxious?" He smiled embarrassedly when he saw the reporter, "It's been like this after staying in the plateau for a long time. We call this skin color 'Gamba Black'..."

Gamba is the place where officers and soldiers guarded by the "Model Camp for Border Guarding on the Plateau", which means "the village under the snow mountain" in Tibetan.

Behind the poetic name is the forbidden area set by nature for life.

The average altitude of the camp is more than 4,800 meters, the minimum temperature is minus 40 degrees Celsius, and there are more than 200 days of strong winds above level 8 each year.

The border is far away, and it has always been the concern of the commander-in-chief.

In August 2016, President Xi signed an order from the Central Military Commission, granting the battalion the honorary title of "Model Camp for Border Guarding on the Plateau".

In 2021, the officers and soldiers of the entire battalion will write to President Xi to report on their work in the past five years, expressing their firm belief and determination to keep in mind President Xi's expectations and trust, and to be loyal to the country and the border.

This sincere letter was sent to Beijing from a distant border.

President Xi's reply letter encouraged: You keep in mind the mission entrusted by the party and the people, stick to the forbidden area of ​​life, guard the sacred territory of the motherland with youth and blood, and complete the task well.

After receiving the reply, the officers and soldiers printed the content of the reply on red paper and posted it at each post in the battalion.

Everyone said that President Xi's reply always reminded them to protect this lofty honor with loyalty.

The altitude of Gamba marks the height of military loyalty——

Before departure, the Third Company held a military meeting, and organized officers and soldiers to swear an oath to the party flag and military flag. Everyone's morale was high: "Keep in mind the mission entrusted by the party and the people, wherever the party points, we will take root!"

Packing up the backpack and heading to the new station, the officers and soldiers of the whole company practiced their sonorous oath with practical actions.

"In front of the soldiers on the plateau, there is no restricted area of ​​life where they can't take root!" Without barracks, officers and soldiers set up tents on the spot; without flagpoles, simple equipment was used instead... After unremitting efforts, officers and soldiers built a temporary camp, under the blue sky and white clouds, bright and colorful The five-star red flag fluttered in the wind.

The oxygen content of the air in Gamba is only 45% of that in the mainland. Ordinary people feel uncomfortable even sleeping and eating here.

However, Gamba is like a magnetic field, attracting batches of frontier soldiers to come here one after another.

This year, he once again faced the choice of staying.

He said to his wife Li Gaili: As long as the organization needs it, I will not leave Gamba.

Some time ago, Li Gaili went to visit relatives at an altitude of more than 5,000 meters.

Li Gaili was as proud as her husband after seeing the contents of President Xi's reply to the officers and soldiers of the battalion at the post.

She said to her husband: "You guard the country, I guard the family, and I support your choice."

In 2021, First Sergeant Luo Honglin and his comrades were on duty in the plateau and encountered severe wind and sand weather.

"Thinking of President Xi's compliment in his reply that 'everyone is good', my comrades and I are full of energy. No matter how hard the wind and sand are or the environment is, we must keep our back straight and never fail to live up to President Xi's ardent entrustment. !" Luo Honglin said that he and his comrades finally overcame the bad weather and completed the task well.

According to the leader of the regiment where the "Plateau Frontier Defense Model Camp" is located, after receiving the reply letter from President Xi, new cadres and new soldiers rushed to sign up to Gamba to train themselves.

Being able to go to Gamba has become a great honor and encouragement in the hearts of officers and soldiers.

On the high mountains near each company camp of the "Plateau Frontier Defense Model Camp", there is a map of China spelled out by officers and soldiers with stones. In the center of the map are six exciting characters - the motherland is in my heart.

Under the towering snow-capped mountains, the reporter was deeply moved by the scorching patriotism of the frontier officers and soldiers.

"The frontier defense forces are fighting on the front line of strong frontier defense, with arduous tasks and heavy responsibilities." Every time they read President Xi's reply letter, officers and soldiers felt a heavy burden on their shoulders: the country is under their feet, and the people are behind them.

The fourth company of the battalion was ordered to open an observation post at a certain mountain pass.

There is no road, the security is difficult, and the weather is bad... After receiving the task, the officers and soldiers climbed to the top of the mountain hand in hand, stepping on the snow more than 1 meter deep.

Deputy Instructor Meng Congrong and Corporal Huang Xinyu lay in the snow on the mountain pass for several hours, staring at the passage.

A certain point at an altitude of more than 5,000 meters, several kilometers away from an observation post.

During an emergency mission, Corporal Tian Haisheng made six or seven trips on foot between the two points. After completing the mission, he was exhausted and fainted in the arms of his comrades.

"Everyone is doing well!" said battalion commander Chen Zuyuan. The words in President Xi's reply encouraged the soldiers in the plateau, and every time he read this, a warm current would flow in his heart.

Once, officers and soldiers of the Third Company went to a mountain pass at an altitude of more than 6,000 meters to perform a patrol mission.

The car broke down on the mountainside. In order to reach the mission area on time, the officers and soldiers resolutely decided to march on foot, struggling to advance in the knee-deep snow.

Company commander Jiang Chenling said: "Where the motherland needs us to go, we must try our best to arrive on time."

The company arranged for him to stay behind during the mission, but he was too sad to eat, so he asked the leader to fight.

Wang Shun said: "Although Gamba is very hard, every time I read President Xi's reply, I feel that my perseverance and dedication here is worthwhile, and I have the strength to persevere in my heart."

"President Xi encouraged us in his reply to strengthen our mission, carry forward our fine traditions, strengthen military training and preparations, faithfully perform our duty to defend the country and protect the border, and strive to make new contributions to the party and the people." Instructor Yin Qiang said, we are not afraid of suffering and being burdened. The thing is you can't conquer the enemy.

We always keep one sentence in mind: the mission must be achieved as indicated by the party flag.

The snow is deep and the slope is steep, but the high fighting spirit of the officers and soldiers of the entire battalion cannot be reached. Everyone shouted the slogan "Win and see me", practiced the skills of winning on the snow-covered plateau, studied the tactics and training methods, and implemented the training and preparation carefully.

After a new type of vehicle-mounted mortar was installed, the artillery commander Lv Yuhan and his comrades riveted in the vehicle artillery field. It only took more than one month to fully grasp the technical and tactical performance of the new equipment, and summed up a set of efficient operation procedures. The first hit in the assessment.

In an exercise, the "Plateau Frontier Defense Model Battalion" was tasked with firepower strikes.

The officers and soldiers carried dozens of kilograms of equipment and rushed to the top of the mountain at an altitude of 5,700 meters to open an observation post, and soon returned the target information.

Sergeant Jia Yitao and his comrades collected and updated shooting data day after day, combined with the study of changes in meteorological and hydrological data in the defense zone in recent years, which effectively improved the accuracy of artillery shooting in high-altitude areas.

When leaving Gamba, the reporters heard the vigorous singing of the officers and soldiers guarding the frontier.

In the distance, the sun shines on the white snow line...