Tunisia.. The Labor Union adheres to the decision to strike and a judge resigns from the electoral commission

The Secretary-General of the Tunisian Labor Confederation, Noureddine Tabboubi, said that the union did not call for a strike until after the channels of dialogue were blocked, and in the meantime, the positions of the political forces continued regarding the upcoming referendum on the constitution. 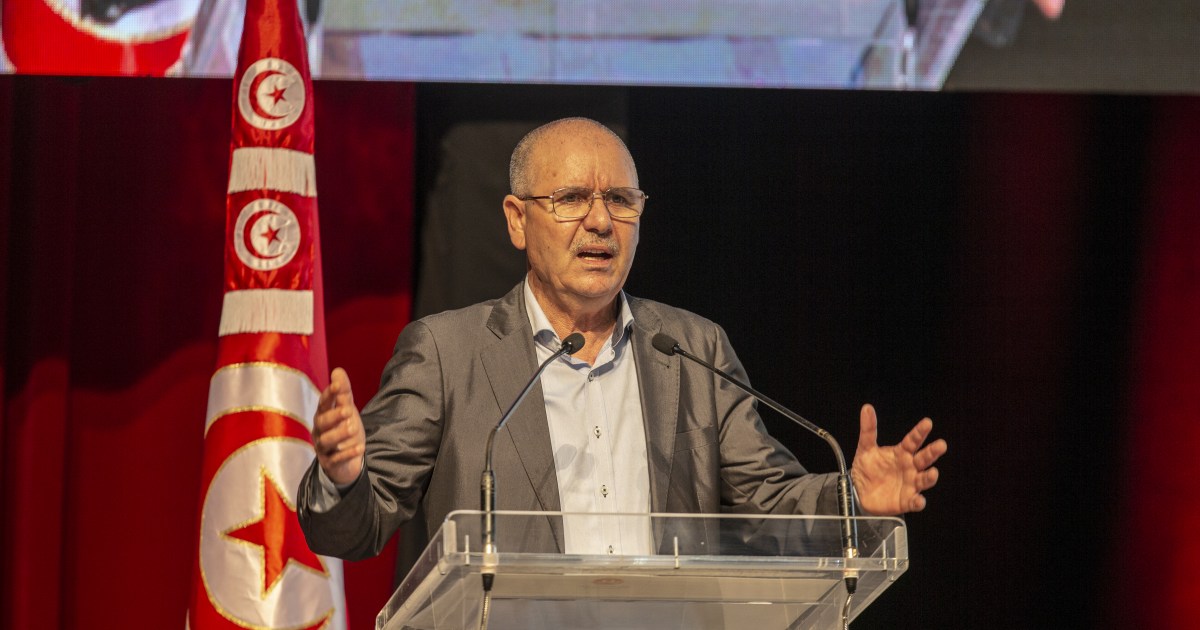 The Secretary-General of the Tunisian Labor Confederation, Noureddine Taboubi, said that the union did not call for the strike - scheduled for next Thursday - until after the channels of dialogue with the government were blocked, and in the meantime, the positions of the political forces continued regarding the referendum on the constitution scheduled for next July 25.

In a speech he delivered today, Al-Taboubi stressed that the General Labor Union refuses to "trade in the suffering of workers," and explained that the strike called by the union was not political, but rather for social benefits, as he put it.

Taboubi stressed that the union "will not risk its history and will not participate in the national dialogue," reiterating its position on the dialogue, which was called for by Tunisian President Kais Saied, who excluded political parties from it as part of his plan to formulate a "new republic" according to a new constitution.

For his part, Salah El-Din Al-Salmi, Assistant Secretary-General of the Tunisian General Labor Union, accused supporters of President Said of "demonizing" the union and its Secretary-General against the background of calling for the strike, stressing that the strike is social and not political.

Al-Salmi stated that the union has not yet determined its position on the referendum, but it is still supportive of the decisions taken by the president on July 25 of last year, as he put it.

On the other hand, the Ennahda movement - which has the largest bloc in the parliament that was dissolved by the president - announced that it would boycott the referendum, which it described as "allegedly, which has no goal but to falsify the will of the people", confirming its adherence to the current constitution approved by Tunisia in 2014.

In a statement, the movement condemned what it said were the coup attempts to falsify the will of the people with a referendum that "lost all standards of integrity and transparency through an election body that lacks any independence."

The Ennahda movement renewed its rejection of what it called the path of dismantling state institutions, and warned of the danger of persisting in this path and of attempts to organize a "formal and exclusionary dialogue with known outcomes and results," according to the statement.

As for Afaq Tounes, it announced today, Monday, in a press conference, that it will not boycott the referendum, but will participate under the slogan "No to the Kais Saied project" in order to thwart this vote, which comes on an "improper" path.

Party leader Fadel Abdel Kafi said that this is not a real referendum, but rather a kind of "appeal and pledge of allegiance," stressing that the path chosen by President Saeed is the path of individual decision, despite the numerous calls for an immediate retreat from this path.

Meanwhile, Tunisian judge Habib al-Rubai announced his resignation from the membership of the Independent Electoral Commission.

Al-Rubaie said - on his Facebook page - that the decision to resign came in support of his fellow striking judges and for a basic law for judges in accordance with international standards.

Judges have been engaged in a general strike in Tunisian courts since June 6, to reject President Kais Saied’s decision to dismiss 57 judges on several charges, including “changing the course of cases,” “disrupting investigations” into terrorism files, and “committing financial and moral corruption,” which they deny. The judges his health.

Since July 25, 2021, Tunisia has been experiencing a severe political crisis when Said began imposing exceptional measures, which escalated successively to the dissolution of Parliament and the Supreme Judicial Council and the issuance of legislation through presidential decrees.

The Tunisian president decided to draft a new constitution, organize a referendum on it on July 25, and then hold legislative elections next December.

Said is facing growing opposition and calls to boycott the referendum, and his opponents accuse him of seeking to establish a dictatorial regime.