China News Service, Sanming, June 13 (Lei Chaoliang) In the Oriental Beauty Tea Base in Laifang Town, Qingliu County, Sanming City, Fujian Province, hundreds of acres of tea trees are particularly green and full of vitality after the rain.   "The quality of Dongfang Meiren tea harvested before and after planting is the best." Deng Guoguang, a 70-year-old Taiwanese tea farmer, led more than 100 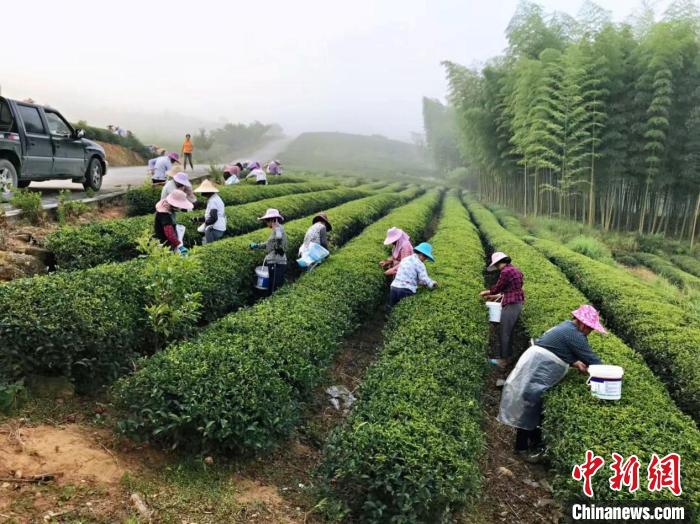 "The quality of Dongfang Meiren tea harvested before and after planting is the best." Deng Guoguang, a 70-year-old Taiwanese tea farmer, led more than 100 people to pick up summer tea.

Deng Guoguang is from Miaoli County, Taiwan. His ancestral home is Jiexi, Guangdong. He is an authentic Hakka.

In 1992, he and his friends from Taiwan came to the mainland for inspection and found that the market in the ceramics industry was good, so he and his friends established a company in Dongguan, Guangdong to engage in the production of industrial ceramics.

In 2000, Deng Guoguang put the pot of gold earned by the ceramic factory into agricultural development.

In Anxi County, Quanzhou City, Fujian Province, "the hometown of oolong tea in China", he invested in the establishment of a tea factory and achieved good results.

In July 2011, Deng Guoguang came to Qingliu Laifang to expand the scale of tea planting and processing, knowing that the climate and soil quality of Qingliu were suitable for the development of Oriental Beauty tea planting.

Oriental Beauty Tea is a famous tea unique to Taiwan, mainly produced in Hsinchu and Miaoli, Taiwan. Because of its extremely high environmental requirements and very little output, it is called "the best tea".

It is said that the British tea merchant dedicated this tea to Queen Victoria. The clear yellow color and mellow and sweet taste made her full of praise, so it was named "Oriental Beauty Tea".

"I am very lucky to have received the care and support of governments at all levels along the way, and enjoy the good policies of the mainland." From the opening of the tea factory to the construction of cement roads, pools, sprinkler irrigation and other facilities in the mountain field, Deng Guoguang has received various support from the local government. support.

In Taiwan, Deng Guoguang's family started making tea from his grandfather's generation, and his elder brother Deng Guoquan is a famous "tea king".

For growing tea, Deng Guoguang also has a lot of experience: "The clear and clear climate is especially suitable for the growth of Oriental Beauty Tea."

Deng Guoguang said that the ecology is not good and there are many insect pests. The tea gardens use pesticides to eliminate the pests and kill the little green leafhoppers, so the Oriental Beauty tea cannot be made.

In order to ensure the original ecology of the tea garden, Deng Guoguang mainly used the dung of herbivorous animals such as cattle and sheep as fertilizer in the tea garden, and then added the residue after oil extraction from soybeans and peanuts. The cost is low and the effect is good.

He said: "I do not seek high yield, but high quality when making tea."

He told reporters that steamed green tea, which is matcha powder, is a natural food additive and is widely used in food and beverages.

Luo Shanghua, deputy director of the Qingliu Taiwan Farmers Pioneer Park Management Committee, said that the arrival of Deng Guoguang not only promoted the employment of local farmers, but also promoted the better development of the Qingliu tea industry.

Although he is old and old, Deng Guoguang still does not stop at entrepreneurship.

Now, in addition to Anxi and Qingliu, he has extended the tea industry to Datian County, Sanming City, and plans to open a tea sales store there to form an industrial chain of tea planting, processing and wholesale.

Not only did he take root in the mainland, Deng Guoguang also planned to let his son come over to develop together and create an exclusive tea brand.