“You can’t rely on US handouts”: what is behind Nicaragua’s permission for the presence of Russian military in the country

The decree on the temporary presence of foreign military personnel in Nicaragua, including Russian ones, is not a sensation, said Russian Foreign Ministry spokeswoman Maria Zakharova. Russia is working with Nicaragua in the field of defense and combating new challenges and is doing it openly, the diplomat stressed. Earlier, Nicaraguan President Daniel Ortega allowed the temporary presence in the country of foreign military, including from Russia, for humanitarian purposes. Experts call Nicaragua's cooperation with the Russian Federation natural and logical from the point of view of maintaining the sovereignty of this Central American republic. 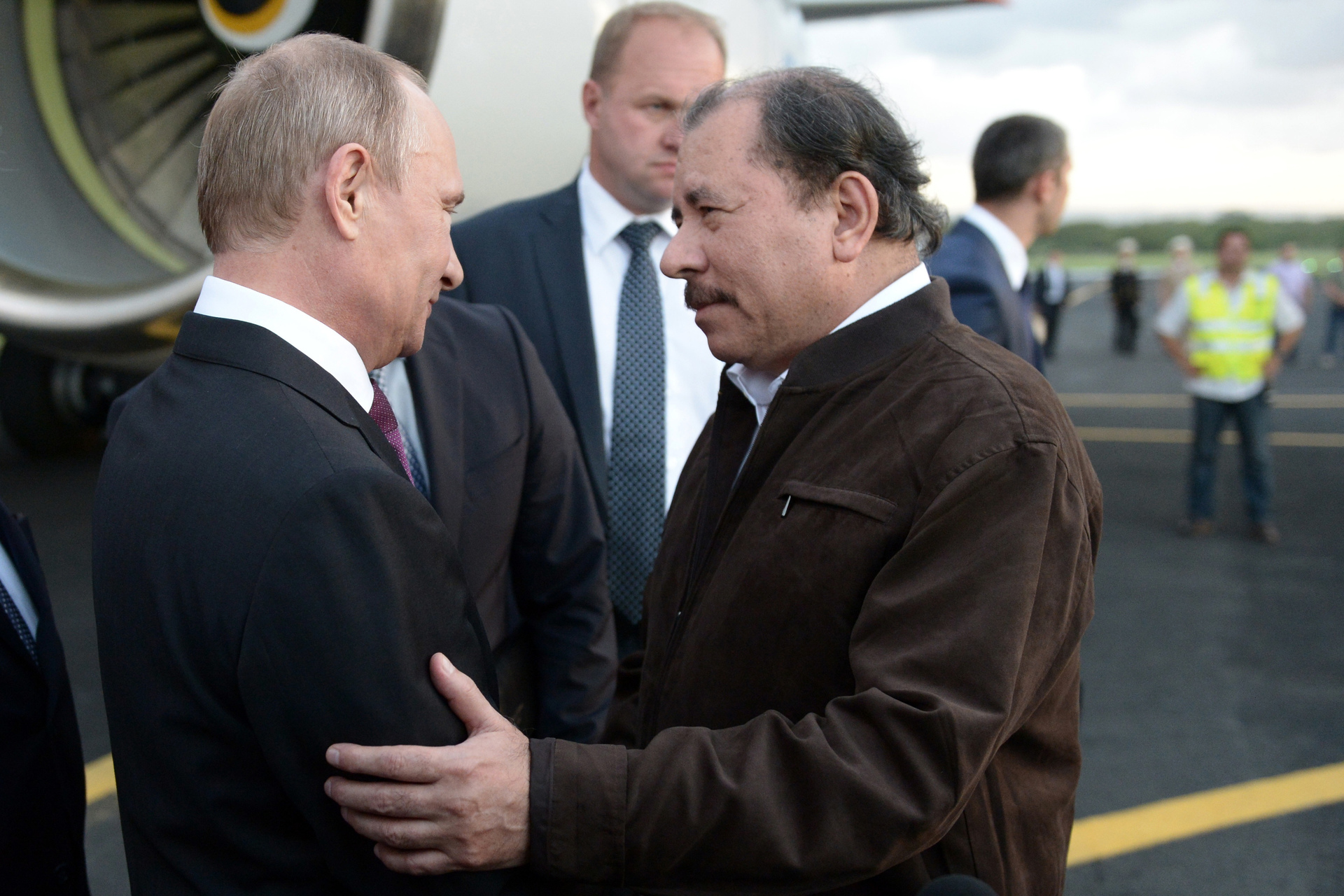 There is no sensation in the decree on the temporary presence of foreign military, including Russian, on the territory of Nicaragua: Russia has been cooperating with this country for a long time, and this cooperation is of an open nature.

“I would like to immediately reassure the “hot heads”: we are talking about the routine - twice a year - procedure for the adoption in Nicaragua of a law on the temporary admission of foreign military personnel to its territory in order to develop cooperation in various areas, including humanitarian and emergency response, combating organized crime and drug trafficking ", - Zakharova explained in a commentary to RIA Novosti.

Recall that on June 8, Nicaraguan President Daniel Ortega, by his decree, allowed the temporary stay in the country of foreign military, including from Russia.

In a statement posted on the website of the Russian Foreign Ministry, Zakharova recalled that Moscow is developing equal cooperation with Nicaragua on a wide range of issues of interest to both countries.

This applies, among other things, to issues of cooperation in the field of defense, as well as the fight against new challenges and threats, the Russian diplomat added.

“We work here openly and transparently, on the basis of existing bilateral documents, in particular, intergovernmental agreements on military-technical cooperation of 2001, on cooperation in the fight against illicit trafficking and use of narcotic drugs and psychotropic substances of 2004 and on cooperation in the field of professional development of personnel in this area in 2013,” Zakharova stressed.

The official representative of the Russian Foreign Ministry added: “In the course of our interaction, which is not directed against third countries, we pay special attention to respect for the principles of regional security.”

“Latin America is a continent of peace and stability, and it is not in our interests to disturb this stability and the balance of power that has developed there,” the diplomat stressed.

Earlier, in February, the Russian Ambassador to Nicaragua, Honduras and El Salvador, Alexander Khokholikov, also noted that the Russian military is in the republic openly and legally, and aircraft and ships of the Russian Federation, if necessary, can visit airfields and ports of the country.

“The Sandinista government annually passes a law regarding the foreign military presence on Nicaraguan territory.

It provides for the possibility of transit and presence in Nicaragua of military personnel and military equipment of a number of countries, including Russia and, by the way, the United States, to exchange experience in the field of military-technical cooperation, conduct joint exercises and activities in the fight against drug trafficking and organized crime, ”Khokholikov noted in an interview with RIA News 4 February.

According to the diplomat, the build-up of cooperation between Russia and Nicaragua is going according to plan and does not depend on the actions of the West.

At the same time, he stressed that it is the sovereign right of the two states to decide in what form military interaction between Russia and Nicaragua is implemented.

Recall that diplomatic relations between the USSR and Nicaragua were established back in 1944.

During the Cold War, the Soviet Union provided the republic and the Sandinista National Liberation Front, which was in power, with large-scale political, economic and military support.

In the early 1990s, political and economic changes took place in both countries, which led to a decline in relations.

At the end of the last century, contacts and cooperation between Russia and Nicaragua were renewed and continued to develop.

For its part, Nicaragua consistently supports Russia's policy in the international arena.

Thus, the republic became the second state after Russia to recognize the independence of Abkhazia and South Ossetia in 2008, and in 2014 - the legality of the referendum, as a result of which the Crimean peninsula was reunited with Russia.

And at the beginning of this year, Nicaraguan Foreign Minister Denis Moncada Colindres supported Moscow, saying that Russia, like Iran, Syria, and China, has the right to defend its territories against the threat of the US and NATO military infrastructure.

Cooperation between Moscow and Managua is also developing in the military sphere.

Back in 2015, the head of the Russian Defense Ministry, Sergei Shoigu, visited the republic and signed a package of military-technical agreements with the Nicaraguan side.

Including on a simplified procedure for the entry of warships of the Russian Navy to the ports of Nicaragua.

Close ties between Nicaragua and Russia have been of particular concern in Washington lately.

A number of influential American media published materials in which experts made statements that such cooperation is detrimental to the United States and strengthens the position of the Russian Federation in Central America.

In particular, in March, The Hill published an article under the heading "Threat to the hemisphere: Russian interference in the affairs of Nicaragua."

“Russia's relationship with Nicaragua is firmly rooted in geopolitics, and Russia is demonstrating global influence despite US and European efforts.

More serious consequences (of these relations. -

) among others - the strengthening of the presence (Russia. -

) in Latin America - pose a threat to democracy, security and regional stability in the Western Hemisphere, ”the Hill believes.

The article notes that the US "could face potential problems as Russia could conclude agreements with Nicaragua that would allow it to place its assets and forces in the backyard of the United States."

"Nicaragua is Russia's most reliable political and military partner in the region," the publication states.

The US must respond."

The US may need to take a tougher stance, given not only the repressive Ortega regime, but also geopolitical concerns about Russia.

At the same time, The Washington Post journalists emphasize that Nicaraguan President Daniel Ortega "considers relations with Russia a 'level one' issue, too important from a strategic point of view to be dealt with by ordinary diplomats."

However, the information that foreign military may be present in Nicaragua is really not sensational, since among the states that are allowed access to the territory of the republic are not only Russia, but also the United States itself, MGIMO professor Vladimir Sudarev noted in an interview with RT.

“But, I think that a friendly attitude, the presence of our specialists, troops, the use of airports, seaports is very useful for us,” the political scientist noted.

At the same time, Russia does not intend to use the territory of Latin American countries in order to threaten the United States in any way, the expert emphasized.

“In fact, no one is interested in repeating the Cuban Missile Crisis of 1962.

Nobody needs this, and Russia too.

But why don't we have a presence in Nicaragua?

In turn, Alexander Chichin, Dean of the Faculty of Economic and Social Sciences at the RANEPA under the President of the Russian Federation, noted that Nicaragua has long been an irritating factor for Washington.

“Ever since Nicaragua got out of the arms of the United States, it has been trying to pursue a balanced policy focused on the fact that Latin America is not the backyard of the United States, but a group of independent and sovereign states whose rights are trampled on by their large northern neighbor,” the expert explained. .

Chichin recalled that Nicaragua, along with Venezuela and Cuba, was not invited to the summit of American states that opened in Los Angeles on June 6, which is a rather obvious gesture.

“Nicaragua has every right to fear American diktat, seek allies for itself, and has the right to find its own ways to preserve and strengthen its sovereignty.

Over the years that the country has been trying to build equal relations with the United States, in response the republic receives only pressure and accusations of dictatorship, ”the expert explained.

In this context, the growth and deepening of ties with Russia are completely natural phenomena, Chichin added.

“The fact that Nicaragua tends to have equal relations with Russia and to attract Russia and the Russian armed forces to be present on its territory is completely normal,” the political scientist noted.

However, according to Chichin, the United States does not accept the fact that a country that, in their opinion, is in Washington's sphere of influence, is looking for allies on the side.

“But they have to deal with it.

They cannot introduce any additional measures against Nicaragua - this country is already under sanctions.

In turn, Daniel Ortega is an experienced person, a serious politician, and he is well aware that one cannot rely on handouts from the United States: any imaginary normalization of relations with Washington is just an illusion that will later lead to a hard blow.

In a sense, he wants to be protected: he needs to maintain his defenses, he needs partners to rely on.

Russia in this sense is a reliable and strong ally,” the expert concluded.