China News Service, June 8 (Xinhua) According to a comprehensive report, recently, the battle over the eastern Ukrainian city of Severo-Donetsk has continued.   Since late May, the frequency of Russian shelling on the city of Severo Donetsk has increased significantly. The two sides once fought street battles around the city, and the stalemate lasted for more than 10 days.   On June 7, Russian 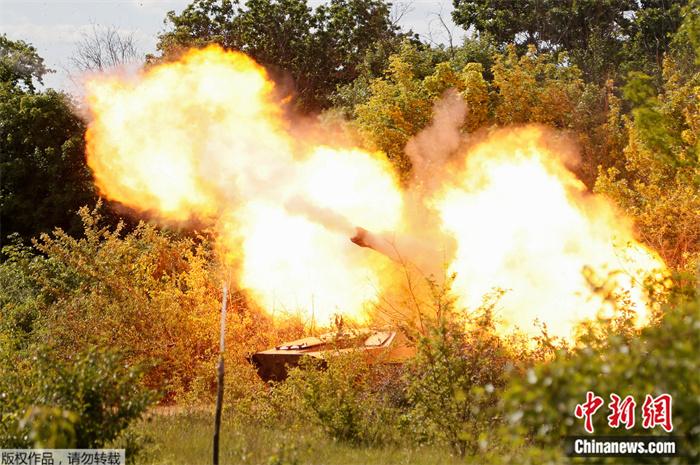 China News Service, June 8 (Xinhua) According to a comprehensive report, recently, the battle over the eastern Ukrainian city of Severo-Donetsk has continued.

Since late May, the frequency of Russian shelling on the city of Severo Donetsk has increased significantly. The two sides once fought street battles around the city, and the stalemate lasted for more than 10 days.

On June 7, Russian Defense Minister Sergei Shoigu said that the Russian army has completely controlled the residential area of ​​Severo Donetsk and is currently fighting for control of its industrial area and nearby residential areas.

The conflict in Mariupol not long ago came to an end as the Azov Steel defenders walked out of their stronghold.

At this moment, a new "Eye of the Storm" was formed in Severo-Donetsk.

Severo Donetsk: New 'Eye of the Storm' in Russia-Ukraine Conflict

Severo Donetsk is close to the border between Donetsk and Luhansk, and across the Severodonets River from Lisichansk, another strategic location in the Donbas region.

On May 27, the Russian army cut off the connection between the Ukrainian army and the northeastern region by occupying the railway hub Bonliman, and then advanced from three directions, planning to form a siege.

On May 31, the Russian army entered the center of Severo Donetsk, and the two sides started street fighting.

On June 1, the military administrator of the Luhansk region, Gede, said that the Russian army had occupied about 80% of the urban area, and street fighting continued.

British media analysis pointed out that as the focus of operations shifted to the Donbas region, Russia was able to combine air power and large-scale artillery strikes to exert an overwhelming firepower advantage.

While the firepower of the Russian military continues to advance, Ukrainian President Volodymyr Zelensky has recently visited the front line several times to boost morale.

On June 5, Tymoshenko, the deputy head of the Ukrainian presidential office, released a video of Zelensky visiting Zaporozhye and meeting with the evacuated residents of Mariupol.

On the 6th, the office announced that the President of Ukraine visited the front line of Lisichansk, a city in the western part of the Luhansk region.

Although it is not clear when they arrived at these places, the recent release of videos one after another undoubtedly shows a shift in Ukraine's high-level concerns.

The battle is fierce: why Severo Donetsk is the focus of contention

Among the signals recently conveyed by all parties, there are many words such as "the battle situation is fierce", "maximum intensity" and "the fighting in the Donbas region has reached the highest intensity". Why is the competition for Severo Donetsk so fierce?

Image source: Press Service of the President of Ukraine.

From a military point of view, for the Ukrainian army, Severo Donetsk is one of the four major strategic towns in the Donbas region. Holding Severo Donetsk will prevent Russia from achieving a huge victory, and it can also win the battle for Western arms assistance. time.

For the Russian army, if it can control Severo-Donetsk and Lisichansk, the Russian army "basically controls the Luhansk area", which is a short distance from the special military "to fully control the Udong Donbas area and the south". The second phase of the action went a step further.

The "Washington Post" analysis pointed out that the conflict in this area has its historical reasons. It is a continuation of the conflict between Russia and Ukraine in 2014. As early as at that time, it was divided into territories controlled by Russia and Ukraine respectively. In the past eight years, along the The conflict over the "line of contact" is protracted.

In addition, the "Washington Post" said that the city of about 100,000 people is home to several factories and one of Ukraine's largest nitrogen fertilizer manufacturers. The fertilizer produced here has been exported to all over the world, so the city has a considerable economic significance.

West: Military aid and sanctions go hand in hand, it is difficult to get a response to the promotion of talks

In the face of fierce conflict, in addition to continuous resistance and continuous encouragement of the military, Ukraine is still looking forward to obtaining military assistance from Western countries as soon as possible.

According to Singapore's "Lianhe Zaobao" report, Ukrainian President Volodymyr Zelensky released a video on June 2, calling on Western countries to increase the supply of weapons to Ukraine in order to push the "Russian-Ukrainian war to a turning point" and help Ukraine "win".

"Once we have enough western long-range weapons, we will push their artillery away from our positions," said Gedai, the military administrator of the Luhansk region on the front line.

In this regard, "heavyweight" figures such as Russian Foreign Minister Lavrov and Security Council Vice Chairman Medvedev have repeatedly issued severe warnings, saying that providing new military assistance to Ukraine will further escalate the situation. "I hope Western countries will think twice before acting. ".

After "thinking twice", the United States announced the 11th security assistance plan for Ukraine, which includes providing Ukraine with more advanced weapons such as the "Haimas" high-mobility rocket system.

The Russian side responded immediately, using long-range high-precision missiles to carry out air strikes on Kyiv, the capital of Ukraine.

On the same day, Russian President Vladimir Putin said that if the West provided Ukraine with longer-range missiles, Russia would strike new targets.

Britain, however, ignored Putin's warnings and said it would follow the US's lead in sending long-range missile systems to Ukraine.

In addition, the European Commission recently announced the sixth round of sanctions against Russia, including some oil embargoes, sanctions on Russian tankers, banks and media, hoping to further exert pressure on Russia.

The back and forth between you and me made Russia's nerves even more tense, and once showed its willingness to "speed up" the speed of special military operations.

However, on the other hand, there are also countries such as France and Turkey who have chosen to mediate, creating possibilities for the negotiations between Russia and Ukraine.

However, despite the repeated expressions of willingness by these countries to work hard, there are still huge differences between the two sides in the conflict on the issue of negotiations: the Russian side believes that Kyiv, under pressure from its "guardian", would rather freeze the negotiations; the Ukrainian side said that "when Ukraine's negotiating position is strengthened negotiations with Russia will resume," and there is currently no reason to propose continuing.

This statement means that peace talks are far away, and conflicts will continue.

And under the current situation, the risks faced by all parties continue to increase: Ukraine is under enormous pressure militarily, Russia's economy and international status are constantly under attack, and Western military assistance to Ukraine may expand the war at any time...

This time, what kind of impact will the storm rising in Severo-Donetsk bring to Russia, Ukraine and the world?