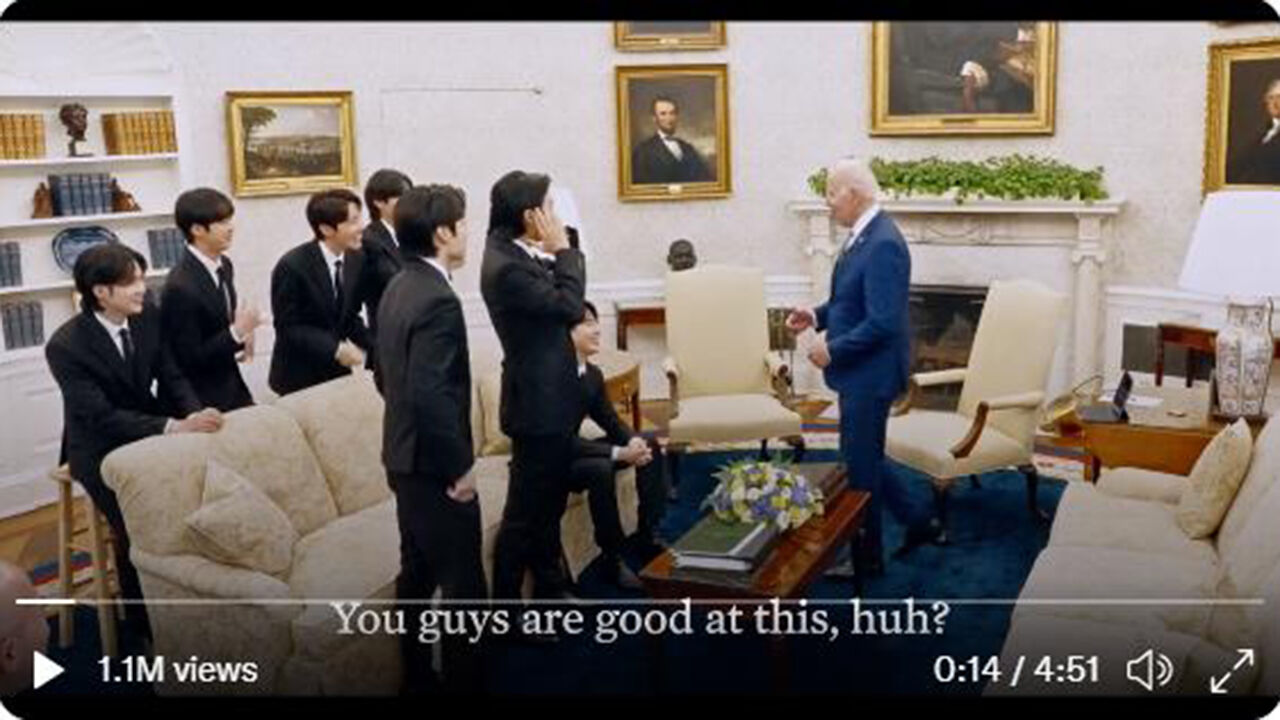 The second video of a visit to the White House in the United States by BTS, a global K-pop group, has been released.

US President Joe Biden uploaded a video of BTS' visit to the White House on the 31st of last month on Twitter on the 4th (local time).

All were 4 minutes and 51 seconds long.

President Biden first uploaded a 59-second short video on the day of his meeting.

The video started with a scene where they met in the Oval Office of the White House.

While all the BTS members were sitting, President Biden turned around and operated his laptop, and then the popular BTS song 'Butter' came out.

"I wanted to make you feel at home," Biden said. "Aren't you familiar with this song?"

At the sudden scene, BTS members clapped in amazement, and some performed dance moves.

"I started my public office because of refugee rights," Biden said. "And even then, famous artists helped move people. What you do makes a big difference. It's important to talk about how to get rid of hate." mentioned.

BTS responded, "When we first heard the news that the White House and President Biden had invited us to stop Asian hate and anti-Asian hate crimes, they said, 'This is it. I thought about it, and thank you for all your efforts.

"I sincerely thank the White House and the US government for working to find a solution to the decision that the President seems to have made into law by signing the COVID-19 Hate Crimes Act," he said.

President Biden said, "Don't underestimate what you do. It matters not only your great talent, but the message you convey. I am the president I am grateful for."

Then BTS leader RM responded with a joke, saying, "I have to tell my mom."

In a separate video interview, BTS said, "Thank you for giving me this important opportunity to talk about an important topic. It reminded me of what we can do as artists." said.

He also said, "As a Korean and as an Asian, I thought that this is an issue that should be discussed, and as a Korean artist, as a person who traveled abroad and experienced with many people, transcending languages ​​and cultures, I thought I should talk about diversity." I also thought that there should be a lot more cases of specialness.”

A scene of an Oval meeting with Vice President Kamala Harris was also released.

"When we see hatred and prejudice, it means trying to scare people and make them feel lonely," Harris said.

In response, BTS said, "We want to repay the love we have received, and as the Vice President said, we just want to have our voices heard, and that's all we want." "Today is a very historically important day for us."

Throughout the video, BTS songs were used as the background music, and BTS posed in various places inside and outside the White House in the background.

It also included a scene where White House press secretary Carine Jean-Pierre escorted BTS to the briefing room, and a brief remark in the briefing room that had already been revealed was included.

President Biden tweeted: "It was nice to meet BTS at the White House this week. The rise in anti-Asian hate crimes requires all of us to stand up and speak out and make sure we don't hide our hate safely." reiterated.