The mayor of Seoul voted conservative and the mayor of the ward voted liberal?

The 8th National Simultaneous Local Election drew attention as a super-adjacent election to be held 84 days after the election. In fact, there were many predictions that the change in votes would not be big enough to be evaluated as an overtime for the election. 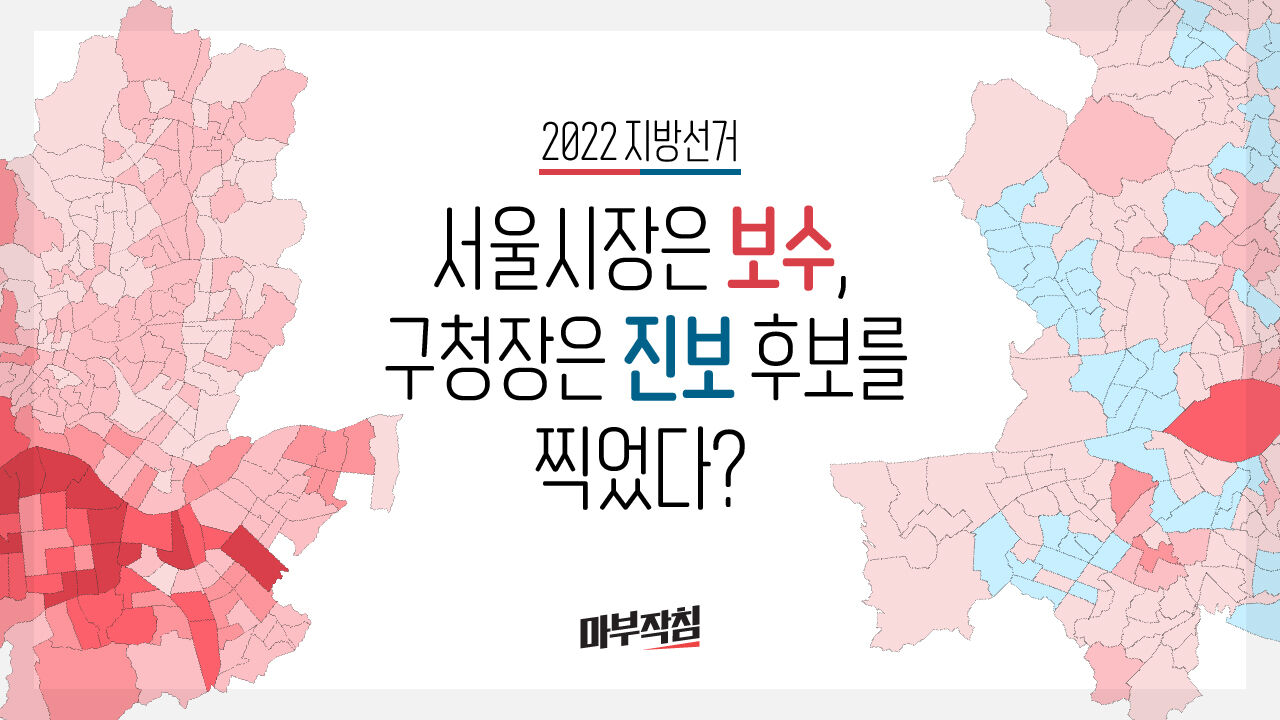 The 8th National Simultaneous Local Election drew attention as a super-adjacent election to be held 84 days after the election.

In fact, there were many predictions that the change in votes would not be big enough to be evaluated as an overtime for the presidential election.

The SBS data journalism team, 「Crazy Action」, compared the vote counting results of the last presidential election and this year's local election and analyzed what kind of change the voters' votes might have had.

However, some mixed results were obtained.

In this way, we analyzed the singularities of this election with a map.

** Eup, Myeon, and Dong unit ballot counting results were collected from the election statistics system of the National Election Commission.

First of all, the result of the Seoul mayor counting ended with the 'perfect game' of the people's power.

In terms of the total vote rate, Candidate Oh Se-hoon recorded 59.05% and Song Young-gil 39.23% in the Seoul mayoral election this year.

When we went one step further and analyzed each administrative dong, the situation became clearer.

As shown in the map above, Candidate Oh Se-hoon swept the first place in all 425 administrative dongs in Seoul and dyed the map red.

It is the first time that a specific candidate swept first place in all administrative districts of Seoul since the popular election.

Conversely, it means that no one candidate Song Young-gil has ever won.

In particular, the so-called 'Han River Belt', which starts with Yeouido, passes through Ichon 1-dong, Banpo 2-dong, Apgujeong, Cheongdam-dong, and Jamsil, has a clear conservative advantage, surpassing the second-place candidate by more than 60%p in this election, starting with the 4.7 re-by-election. I confirmed that it was local.

However, if you look closely, the results of the 4.7 by-election a year ago are almost the same.

At that time, as the real estate policy of the Moon Jae-in government was under judgment, most of Seoul chose a conservative candidate as the mayor.

Similarly, in 419 out of 424 administrative districts, Oh Se-hun showed a landslide victory to the extent that the candidate won.

However, in the March presidential election, Seoul's public sentiment was somewhat different from that shown in this local election.

Of course, there is a difference between the presidential and local elections in that electoral districts and candidates are different.

(It means blue in the map above) At that time, the number of administrative wards that the Democratic Party won was 180 out of 425 (42.3%), which was slightly less than the majority.

In other words, 4 out of 10 Seoul voters chose Lee Jae-myung.

Nevertheless, it is difficult to find another region where Candidate Jae-myung Lee overwhelmingly won (dark blue region: more than a 56%P gap).

Since there was no place that clearly widened the gap, Yun was able to win about 5%p at the time.

But decisively, the Democratic support did not continue in this election.

Politicians have different interpretations of this.

In fact, even within the Democratic Party of Korea, there is a lot of controversy regarding the nomination for Seoul mayor.

After the election, Rep. Hong Young-pyo said on CBS Radio's 'Kim Hyun-jung's News Show' on the 3rd, "Didn't the Strategic Nomination Committee actually cut off (Candidate Song)? It turned out to be a job and eventually became a candidate for mayor of Seoul,” he said.

In summary, the change in the votes of Seoul citizens in the three adjacent elections was different for each election.

The mayor voted Democrat once

However, there is one more interesting thing about the results of this election.

That is, there were many regions where the results of the municipal and city governor elections were reversed.

A typical example was the Seoul mayoral election.

There is a common saying that local elections are based on political parties.

That is why in local elections, not only the heads of metropolitan and local governments, but also local councilors, local councilors, and the superintendent of education are required, so in many cases the candidates of the parties they support are chosen equally.

However, this election saw a slightly different trend.

So how would it be different?

Let's look at the map again.

The map above shows the votes of the citizens of Seoul in the election of the mayor of Seoul by eup, myeon and dong.

It's a completely different view from the Seoul mayoral election, isn't it?

If Candidate Oh Se-hoon wins in all administrative districts in the Seoul mayoral election, at a glance there are many neighborhoods where the Democratic Party of Korea has won in the district mayor election.

This was also evident in the actual analysis.

In the election for mayor of Seoul, the People's Power won 17 places and the Democratic Party won 8 places.

By eup, myeon and dong, 158 out of 425 administrative dongs (37.18%) were the areas where the Democratic Party candidate had the upper hand.

Among them, we also looked at the neighborhoods where the votes of the mayor of Seoul and the mayor were opposite.

To explain the above table a little bit more, this table shows the 10 districts that have the largest change among administrative dongs where the mayor of Seoul elected candidate Oh Se-hoon, but the mayor of the ward elected the candidate of the Democratic Party.

Administrative dongs, mainly belonging to Seongdong-gu, were at the top of the list.

In other words, the change in voter turnout in the two elections was so opposite that it differed by about 47.8%p.

Candidate Won-oh Won started his term as Seongdong-gu mayor in 2014 and was re-elected in 2018.

In fact, he showed an overwhelming majority of 69.5% of the vote in the last local election.

In other words, it can be said that the election of the mayor selects a candidate who captures the candidate's qualities, abilities, and local people's feelings rather than political orientation.

In addition, the heads of Jungnang, Geumcheon, Seongbuk, Nowon, Eunpyeong, and Gwanak-gu had in common that they were active-duty mayors.

Democrat-strong regions have been neglected

Shall we look at Gyeonggi-do?

The difference between the two candidates is 5.3%p, indicating that the voters in Gyeonggi-do certainly pushed Candidate Jae-myung Lee.

However, in this local election, the so-called Lee Jae-myung effect was lost, and a very close contest took place.

In fact, the Gyeonggi Governor Election has predicted a difficult match since the May poll, with several results that were within the margin of error.

They scrambled to and fro until dawn, and in the end, Candidate Dong-yeon Kim recorded 49.06% and Candidate Eun-hye Kim recorded 48.91%, winning a sweaty victory of 0.15%p.

However, in terms of the flow of the last presidential election, the Democratic Party's vote counting results seem to have lost the rabbit.

It is analyzed that, unlike the last presidential election, the Democratic Party's dominance area disappeared rather than losing votes in a specific area.

Let me explain the results of the March presidential election in which Lee Jae-myung appeared.

The dark blue color on the map means that candidate Lee Jae-myung far outnumbered candidate Yoon Seok-yeol in the number of votes. Seongnam, Siheung, Pyeongtaek, and Hwaseong are representative, but in this election (map above), it is difficult to find a dark blue area.

Rather, there are several places where Candidate Eun-hye Kim won the majority of the votes, and it seems that this local election has been a tight contest.

The results of the Gyeonggi-do city, county-gu mayor election…

the power of the people

The red areas on the map again increased.

The map above shows the votes of each eup, myeon, and dong in the Gyeonggi Si, Gun and Gu district elections, not the Gyeonggi governor.

It can be seen that the red area has increased more than the public sentiment of the Gyeonggi Governor, and there is a large gap.

In fact, in the results of the Gyeonggi-do basic group head, it was proved that the votes were mixed with the election for the regional group head so that the People's Power 22 places and the Democratic Party of Korea took 9 seats.

The governor of Gyeonggi-do chose Kim Dong-yeon from the Democratic Party of Korea, but as the head of the basic group, he supported the people's power.

This is the exact opposite of the Seoul election situation.