His Highness Sheikh Mohamed bin Zayed Al Nahyan, President of the State, received yesterday the work team of the Abu Dhabi National Oil Company (ADNOC), accompanied by the Minister of Industry and Advanced Technology, the Managing Director and CEO of ADNOC, Dr. Sultan bin Ahmed Al Jaber. His Highness praised during the meeting, which took place in 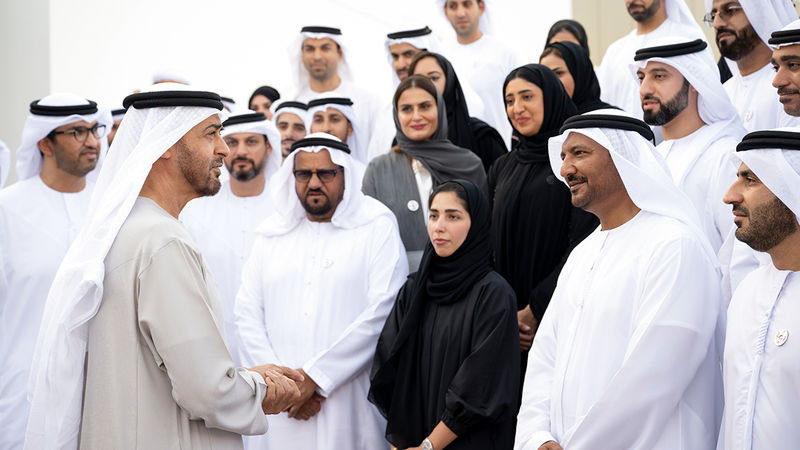 He praised her efforts in empowering and rehabilitating Emirati youth

During the meeting, which took place at Al Bahr Palace, His Highness praised ADNOC's role in empowering, preparing and rehabilitating young Emirati men and women, pointing to the importance of ADNOC's experience in enabling young people to occupy leadership positions and play essential roles in the company's work system.

His Highness Sheikh Mohamed bin Zayed Al Nahyan stressed that the UAE is keen to provide training and rehabilitation opportunities, and everything that would build distinguished national human cadres. In various fields.

For his part, Al Jaber said, during the meeting, that ADNOC was keen to create and structure new opportunities that provide UAE citizens with opportunities to invest in its projects and businesses and contribute to enabling economic growth in the UAE for the next 50 years.

He added that the "Promotion of In-Country Value Program", launched by "ADNOC" during 2018, contributed to the provision of more than 3,000 jobs for citizens with skills and competencies in the private sector, noting that the program was circulated at the state level, in cooperation with the Ministry of Industry and Advanced Technology. As a result of his success.

It is noteworthy that Emirati male and female youth make up 58% of the company’s total workforce, while ADNOC is implementing a number of programs to develop Emirati youth in the oil and gas sector, including the “Emerging Leaders Program”, “Advanced Leaders” and “Women Leadership Development” And the “Executive Leadership Program” and many others, which aim to prepare distinguished future leaders capable of serving the nation and society and achieving leadership ambitions.

• «The UAE is keen to provide training opportunities, and everything that would build distinguished national human cadres».

The Head of State: The responsibility to follow up the affairs of the families of the martyrs is our top priority

His Highness exchanged cordial conversations with the delegation, and was briefed on the office's continuous quality initiatives and programs to support the families of the nation's martyrs.

His Highness said that the responsibility of following up the affairs of the families of the martyrs and their children and ensuring all forms of comprehensive care will remain our top priority, stressing His Highness' keenness to communicate directly with them, meet their needs, support and empower them.

They congratulated His Highness on assuming the presidency of the UAE, wishing him success in leading the country towards further progress and prosperity.

For his part, His Highness the President expressed his thanks and appreciation to Chinese President Xi Jinping for the good feelings he showed towards His Highness and the people of the Emirates, stressing the strength and distinction of Emirati-Chinese relations and keenness to continue deepening and pushing them forward at all levels.

His Highness Sheikh Mohamed bin Zayed Al Nahyan also expressed his thanks and appreciation for the sincere feelings shown by the Swiss president towards the UAE and its people on the death of the late Sheikh Khalifa, may God have mercy on him.

He also expressed his thanks for congratulating him on his assumption of the presidency, and for the good wishes he expressed for success in the country's leadership, wishing the relations of the two countries further development and development.