Faced with Congo fever, Iraq is looking for the little beast

In a makeshift barn, a team in protective gear sprays a cow and her calves with a pesticide. A scene now almost daily in the campaigns of Iraq, confronted this year… 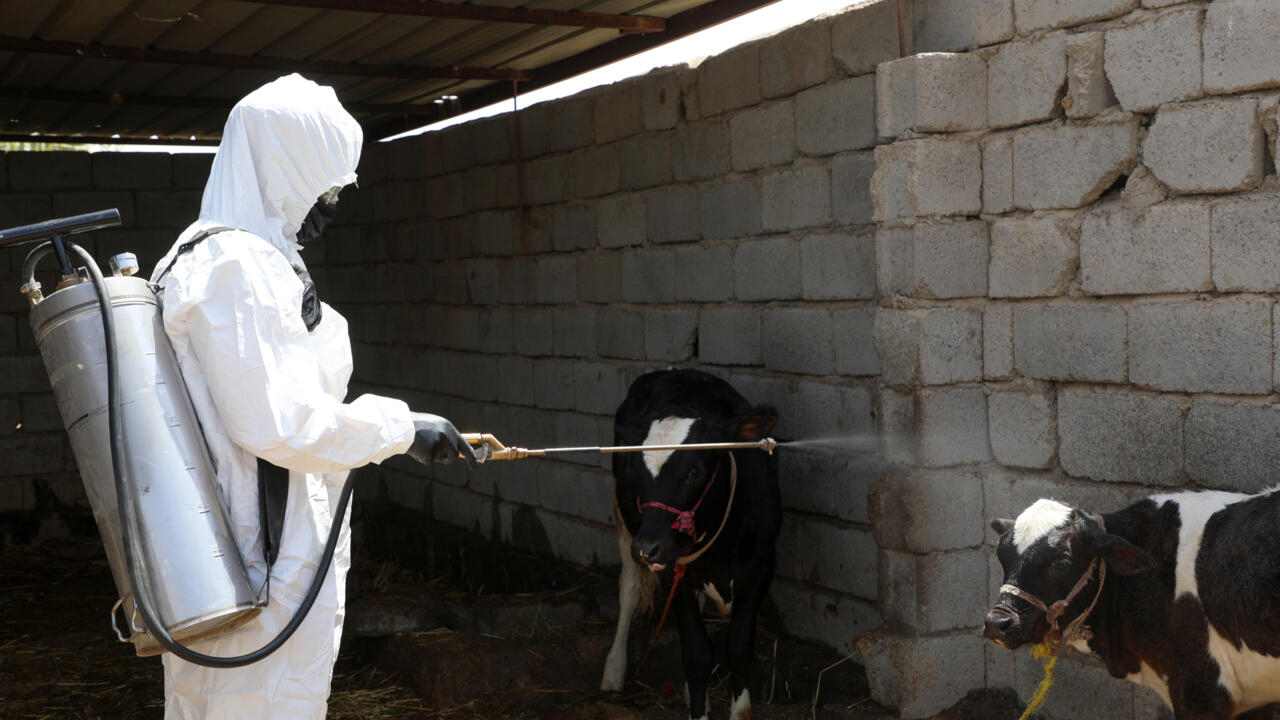 "There is no possible comparison" with recent years, where the contaminations were counted "on the fingers of the hand".

Since January, Iraq has recorded among its population 111 confirmed cases of Crimean-Congo hemorrhagic fever (CCHF), including 19 deaths, according to the World Health Organization (WHO).

Half of these contaminations are in Dhi Qar, where cattle, sheep and buffaloes are raised, all potential intermediate hosts of the virus.

In the village of Al-Boujari, a team from the health department disinfects the animals in a house where a woman was infected.

Wearing goggles and white coveralls, masked officers spray the cow and her two calves with an acaricide that kills disease-carrying ticks.

When the operation is over, one of the men exhibits in a small container some brownish ticks, no bigger than a fingernail, picked up from the cattle.

According to the WHO, the transmission of haemorrhagic fever to humans occurs "either by tick bites or by contact with blood or tissues of infected animals, during or immediately after slaughter".

"Animals on the loose"

Between humans, transmission "may occur following direct contact with blood, secretions, organs or biological fluids of infected subjects", according to the WHO.

A man with Crimean-Congo hemorrhagic fever (CCHF) at a hospital in Dhi Qar province, southern Iraq, May 25, 2022 Asaad NIAZI AFP

Those most affected are livestock farmers and slaughterhouse workers.

The representative of the WHO in Iraq Ahmed Zouiten advances several "hypotheses".

He mentions the absence, in 2020 and 2021, of the spraying campaigns carried out annually by the authorities on animals, due to the restrictions imposed by the coronavirus.

Consequently "the population of ticks has increased", he says.

There is also "the multiplication of fleas" which began "about two to three weeks earlier", underlines the expert.

“With great caution, we attribute part of this outbreak to global warming, which has lengthened the breeding period for ticks,” he explains.

A butcher in Dhi Qar province, southern Iraq, shows a certificate proving that the meat is not contaminated with Crimean-Congo hemorrhagic fever (CCHF), May 25, 2022 Asaad NIAZI AFP

The doctor Azhar al-Assadi, specialist in hematological diseases in a hospital in Nassiriya, evokes the non-respect of hygiene standards in slaughterhouses and the presence of "free animals" in certain regions.

In infected patients, “the average age is around 33 years old”, even if the range goes from 12 to 75 years old, he explains.

The most serious cases suffer from all types of bleeding: from the mouth, nose, but also internal bleeding affecting the gastrointestinal system and the urinary tract.

"We fear an increase in cases during Eid al-Adha due to the increase in slaughtering and more contact with meat," said the doctor.

During this great Muslim festival, expected in July, many families cut the throat of an animal for the meal.

The fever has been raging for decades in the Balkans, Iran and Turkey.

Iraq, supported by the UN, has intensified spraying and initiated public awareness campaigns.

Hospitals have adopted in their treatment an antiviral "which gives good results", according to Mr. Zouiten.

“Mortality appears to be decreasing.”

Near Najaf, a large city in the south, slaughterhouses are monitored by local authorities.

"Before, I slaughtered 15 or 16 animals a day, now it's more like seven or eight," admits butcher Hamid Mohsen.

“The amount of cattle arriving daily has decreased by around 50%,” confirms Fares Mansour, director of the Najaf Veterinary Hospital which oversees the slaughterhouses.

"People are afraid of red meat and think it can transmit infection."