Turkish President Recep Tayyip Erdogan's announcement of launching military operations soon to expand the already established safe areas across Turkey's southern border, further intensifying the dispute with his country's partners in the North Atlantic Treaty Organization (NATO), over his refusal to join Finland and Sweden in the alliance. 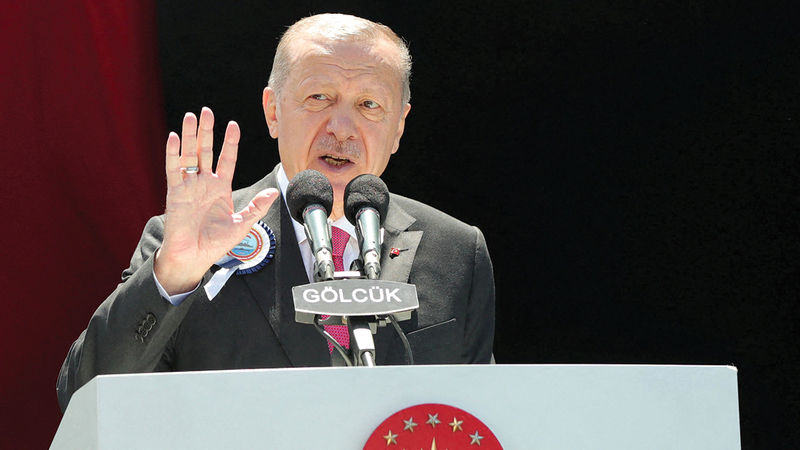 Turkey has made 3 incursions into Syria since 2016

Turkish President Recep Tayyip Erdogan's announcement that he will soon launch military operations to expand the already established safe areas across Turkey's southern border, further intensifies the dispute with his country's partners in the North Atlantic Treaty Organization (NATO), over his refusal to join Finland and Sweden in the alliance.

Analysts say Erdogan's surprise announcement, last Monday, reflects his belief that the West will not oppose such operations at a time when it needs Ankara's support for the two countries' efforts to join NATO.

To accept the admission of new countries to the membership of the alliance, the approval of all the 30 member countries currently, and they are required.

On Tuesday, the United States said it was confident Sweden and Finland could address Turkish concerns.

Analysts say Erdogan's announcement is also aimed at bolstering Turkish nationalists' support for his two-decade rule, as he prepares for tough elections next year.

Cross-border military operations in the past have boosted his popularity in opinion polls.

Turkey has carried out three incursions into northern Syria since 2016, capturing hundreds of kilometers of land and advancing about 30 kilometers into Syria in operations that mainly target the US-backed Syrian Kurdish People's Protection Units.

It also intensified its military operations against the Kurdistan Workers Party (PKK) in northern Iraq during the past years.

Turkey considers the YPG and the PKK as one terrorist entity, but its NATO allies consider only the PKK, not the YPG.

Asli Aydintasbas, a fellow at the European Council on Foreign Relations based in Istanbul, says Erdogan's move is to test his country's NATO allies.

She added, "President Erdogan's method in facing international challenges is to escalate the situation... and this often succeeds in pushing the (NATO) allies to retreat."

She continued, "This has succeeded in the eastern Mediterranean and in Syria before, so why not try again."

Erdogan said operations to counter cross-border threats would begin as soon as the Turkish armed forces and intelligence completed their preparations, with decisions to be taken at a meeting of the National Security Council.

The People's Protection Units (YPG) is a key component of the Syrian Democratic Forces, a Kurdish-led alliance on which the United States has relied heavily in the fight against the Islamic State since 2014.

Commenting on Erdogan's announcement, the SDF accused Turkey of trying to destabilize the region by threatening military action in northern Syria.

The SDF added that it shot down a Turkish drone last Sunday, which it claimed was used by Ankara to reconnaissance over areas under its control before a planned bombing.

"In the event of any attack, of course we will resist and fight," said Juan Mulla Ibrahim, a spokesman for the Autonomous Administration of the Syrian Democratic Forces in northeastern Syria.

The international community now faces an important test: will it effectively restrain Turkey?

The Syrian Foreign Ministry in Damascus did not immediately respond to requests for comment.

Erdogan said the planned military operation would reveal which countries are considering Turkey's security concerns and which are not, an issue at the center of the current dispute over NATO expansion.

Darren Khalifa, an analyst specializing in Syria in the International Crisis Group, says that the Turkish army's movement against the People's Protection Units has always been a possibility, despite the relative calm along the Turkish border with areas under the control of the units in northern Syria since 2019.

She added that while mediators, including the United States, managed to calm the tension in the past few years, "the heart of the matter has not been dealt with, which is Turkey's relations with the Kurdistan Workers' Party."

Analysts say Erdogan hopes to use the issue of Sweden and Finland's NATO membership as an opportunity to achieve his long-held goal of creating a buffer zone free of Kurdish fighters along Turkey's border with Syria.

His move comes at a time when opinion polls show support for Erdogan and his ruling Justice and Development Party (AKP) waning, amid simmering economic problems.

Turkey will hold presidential and parliamentary elections in 2023.

Turkey has carried out cross-border operations before the elections, Aydintasbas said, but that carrying out a large-scale military incursion also has risks.

In addition to the presence of the People's Protection Units, Russia deploys forces in the region in support of Syrian President Bashar al-Assad.

There are also US forces, armed groups backed by Turkey and others backed by Iran, militants, and Syrian government forces across northern Syria.

• The Syrian Foreign Ministry said that it would consider any Turkish military incursion into its territory “war crimes and crimes against humanity.”

Damascus considers the incursions a violation of the country's sovereignty and territorial integrity.

And the Syrian Foreign Ministry said, last Wednesday, that it had sent a letter to the Secretary-General of the United Nations and the Security Council in which it described Turkey's actions as illegal.

"It amounts to being characterized as war crimes and crimes against humanity," she said in a statement carried by the state news agency.

Erdogan raises the tone of national sentiment before the elections.

Analysts say Erdogan's announcement is also aimed at bolstering Turkish nationalists' support for his two-decade rule, as he prepares for tough elections next year.

The Turkish army’s move against the YPG has always been a possibility, despite the relative calm along the Turkish border with YPG-controlled areas in northern Syria since 2019.