Russia expects that the United States will not take such a provocative step as the supply of multiple launch rocket systems to Ukraine, since this could lead to an escalation of the conflict. This was stated by the Russian Ambassador to the United States Anatoly Antonov. He added that, according to the American media, Washington may transfer MLRS HIMARS and M270 MLRS to Kyiv. According to the diplomat, there is a risk that thanks to such weapons, the Armed Forces of Ukraine will be able to strike at Russian cities. Antonov stressed that such a situation is “unacceptable and unacceptable” for Moscow. From the point of view of analysts, if the White House nevertheless begins to supply MLRS to the Kyiv regime, the Russian Armed Forces in Ukraine will have another military task - to destroy these weapons as soon as possible, since they pose a potential threat to Russia. 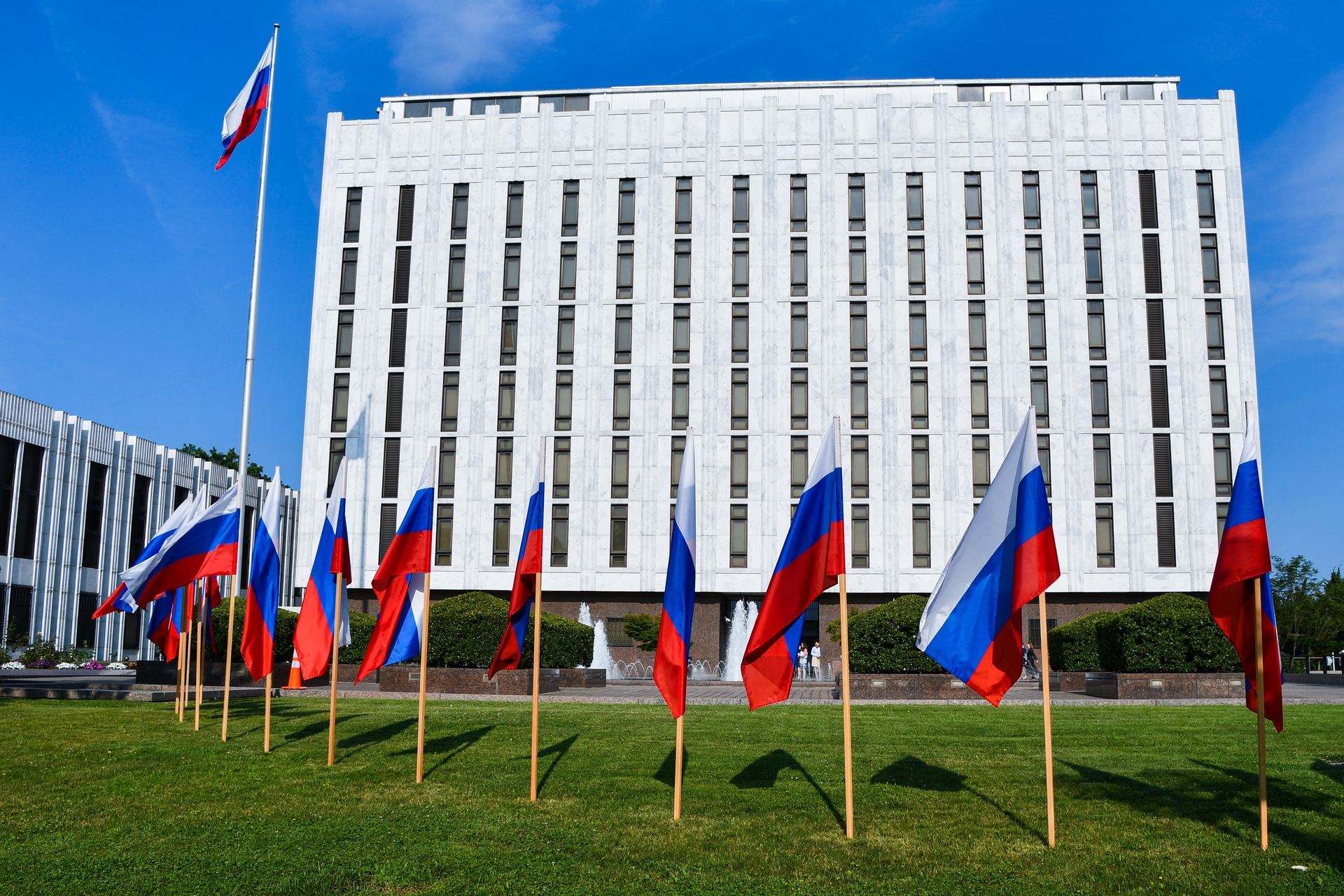 Moscow hopes that Washington will not take such a provocative step as the supply of multiple launch rocket systems (MLRS) to Ukraine, as this could lead to an escalation of the conflict.

This was stated by Russian Ambassador to the United States Anatoly Antonov, answering a question about “leaks” that appeared in the media regarding the White House’s alleged decision to transfer long-range missile weapons to Kyiv.

“We hope that common sense will prevail and Washington will not take such a provocative step,” Antonov said.

- According to US media, the administration may transfer MLRS HIMARS and M270 MLRS to Kyiv, which will be equipped with M31 GMLRS guided missiles.

There is a risk that such funds will be placed near the Russian borders and the Ukrainians will have the opportunity to strike at Russian cities.”

According to the diplomat, such a situation is “unacceptable and unacceptable” for Russia.

“I am sure that our armed forces will take the necessary steps to reset the capabilities of the Armed Forces of Ukraine,” he stressed.

However, according to him, information about the supply of MLRS from the United States to Ukraine needs to be carefully verified.

According to the ambassador, for the time being the Russian side proceeds from the statement by Pentagon spokesman John Kirby that no final decision has been made on this issue.

“I would like to emphasize that through diplomatic channels, we have not repeatedly informed the United States that the unprecedented pumping of Ukraine with weapons significantly increases the risks of an escalation of the conflict,” Antonov said.

From his point of view, Washington is well aware that its actions are delaying the prospects for peace.

“The US is getting deeper and deeper into the crisis in Ukraine.

This is fraught with unpredictable consequences for global security.

We call for an end to the senseless and extremely risky pumping of weapons into the republic.

It is important to abandon threats against us and statements about the military victory of Ukraine,” the Russian ambassador said.

He believes that in order to end the conflict as soon as possible, Washington and Kyiv need to "recognize the reality."

“This would make it possible to move forward along the path of a political settlement and prevent the deterioration of the situation in the field of international stability,” Antonov is sure.

Thus, according to The New York Times, the United States plans to include highly mobile MLRS HIMARS on a wheeled chassis in the next package of arms supplies for Kyiv.

“HIMARS systems can be equipped with a launcher with six GMLRS (guided) missiles or one larger guided missile and are able to quickly move after a volley,” the publication writes, recalling that the Pentagon most often uses the M31 GMLRS system, which can be equipped with ammunition with satellite guidance, "possessing approximately the same mass of explosive as a 250-kg aerial bomb."

The M31 GMLRS has a range of about 70 km, which, according to The New York Times, significantly exceeds the range of "any type of artillery installation currently used by Ukraine."

As The Wall Street Journal notes, the mobile artillery mounts, which are supposedly expected to be delivered in the coming weeks, “will allow Ukraine to strike Russian artillery in the Donbass.”

In turn, CNN reports that a new military aid package, which may include American MLRS, may be announced as early as next week.

At the same time, The Washington Post writes that, according to an unnamed senior US official, the White House agrees to provide Ukraine with MLRS systems, but will "seek to contain the risk of escalation by refusing to supply the country with long-range missiles compatible with the systems."

“According to the US Army, the firing range of conventional missiles, which are equipped with such MLRS, is about 70 km.

The range of specialized ATACMS operational-tactical missiles is much greater and can reach 300 km, ”the publication reported.

However, the Pentagon said that Washington had not yet made decisions on the supply of MLRS to Ukraine.

“Of course, we know that the Ukrainian side is requesting both privately and publicly the so-called multiple launch rocket systems.

I will not talk about decisions that have not yet been made, but we (the Kiev authorities.

) are in constant contact with them, ”John Kirby said during a briefing.

Experts interviewed by RT do not exclude that Washington may indeed start deliveries of MLRS to Kyiv, despite Moscow's protest.

“Russia has already warned both the West and the United States against sending their MLRS to Ukraine, which could potentially be used to hit targets on Russian territory.

And Washington should take this as a serious warning.

Unwinding tensions in Ukraine due to such supplies will not bring stability to the region, ”military expert Viktor Litovkin stated in an interview with RT.

According to him, in this case, the responsibility for the escalation of the situation will lie entirely with the United States.

The analyst also does not rule out that information about the alleged supply of MLRS to Ukraine could have appeared at the suggestion of the American authorities.

“This may be an attempt by the White House to test Russia's reaction to such data.

In addition, Western media in general are designed to annoy Moscow.

They do this all the time and will continue in the same spirit, and regardless of what Biden's decision on the supply of MLRS will be.

Washington is betting that such media reports will force Russia to take some kind of protective measures that will drag it into an arms race, ”Litovkin argues.

For its part, retired Colonel Viktor Baranets believes, judging by the reaction of the Russian side, Moscow has taken note of the American media reports about possible deliveries of MLRS to Kyiv and already has a plan of action for this case.

“Russia has a plethora of weapons that can hit those supply chains, as well as disable those weapons on the battlefield.

In particular, the Kinzhal hypersonic system and Kalibr cruise missiles are capable of performing these tasks.

Of course, the RF Armed Forces will destroy the US MLRS if they are brought to Ukraine.

The Russian military will do everything so that these weapons cannot take part in hostilities, ”the expert said in a commentary to RT.

According to him, Russia will be forced to act “quickly and toughly,” since multiple launch rocket systems are long-range weapons.

“If, for example, the Armed Forces of Ukraine manage to install such weapons in eastern Ukraine, then both Russian cities and important infrastructure located there will fall into their zone of destruction,” says Baranets.

At the same time, he believes that even if the Armed Forces of Ukraine receive American MLRS, this is unlikely to significantly affect the course of the Russian special operation.

“Under such circumstances, Russia will simply have one more military task - to destroy these weapons as quickly as possible.

The RF Armed Forces will also be forced to deliver more massive strikes against areas where these weapons can be deployed, against ammunition depots, ”concluded Baranets.