What is the Founding Act signed 25 years ago between NATO and Russia?

On May 27, 1997, Russia and NATO thought of turning the page on the Cold War with the Founding Act, a cooperation agreement aimed at establishing "a lasting and inclusive peace". While the fighting... 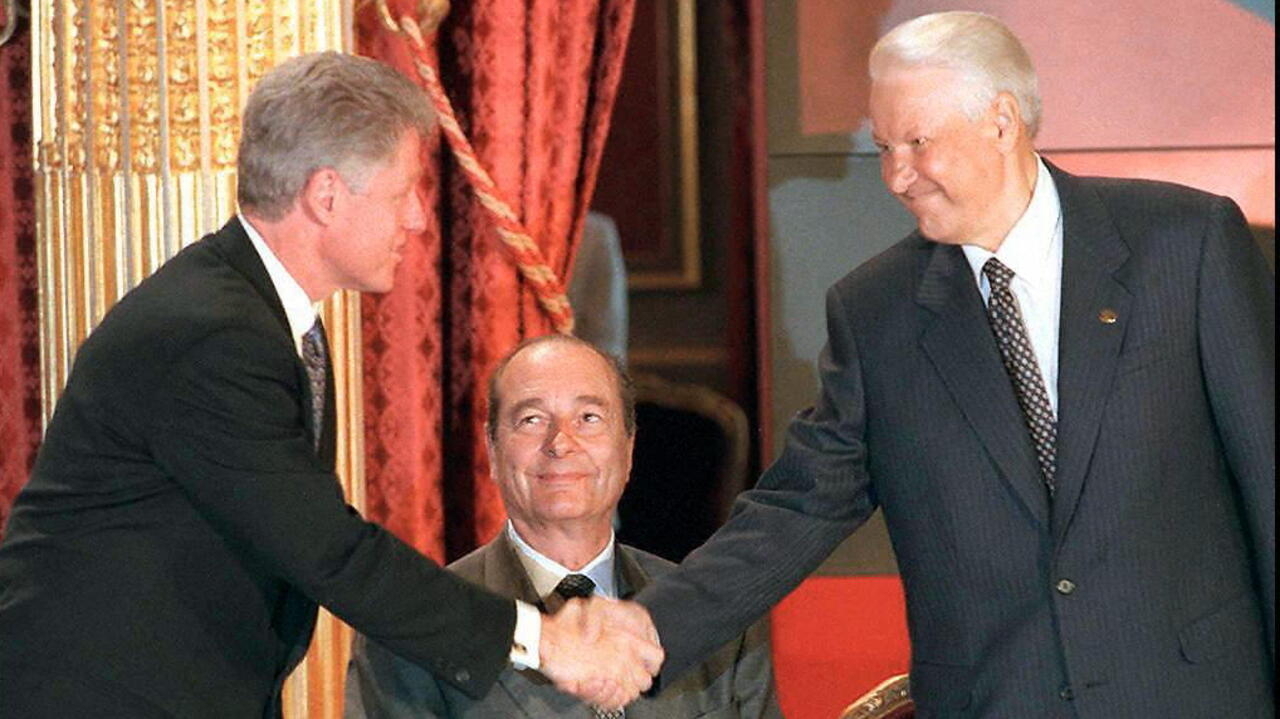 The date was supposed to mark the entry into a new era for the West and Russia after half a century of conflicting relations: on May 27, 1997, French President Jacques Chirac met with great fanfare, in Paris, his American counterparts and Russian, Bill Clinton and Boris Yeltsin, for the signing of the Founding Act on mutual relations, cooperation and security between the Russian Federation and NATO.

Without having the legal force of a treaty, this Founding Act, ratified after several years of negotiations at the highest level, gave birth to a new security architecture in Europe.

From now on, the two parties no longer see themselves as adversaries but as partners.

The 24-page document thus provides for a strengthening of the partnership with Moscow in the fight against terrorism, peacekeeping, disarmament and even economic relations.

It is also accompanied by the creation of a permanent joint NATO-Russia Council.

According to the Founding Act, this cooperation must be based on "the principles of human rights and civil liberties".

The signatory countries also undertake not to “use or threaten or use force” against each other or against any other state.

"It was another era and a period full of hope for the development of Russia" then in the midst of a democratic transition, specifies researcher Nicolas Tenzer, director of the Russia Desk publication on the France 24 antenna, recalling that "the Founding Act was preceded by a Partnership for Peace in 1994".

Paving the way for enlargement

After the disappearance of the USSR in 1991, NATO wondered about its new missions.

Membership applications from former Eastern Bloc countries, plunged into a security vacuum with the dissolution of the Warsaw Pact – the military alliance that united Eastern Europe with the Soviet Union during the Cold War –, will then offer a new legitimacy to the organization led by the United States.

In this context, the Founding Act appears as a "necessary instrument for [NATO's] expansion in Moscow's former sphere of influence", writes researcher Amélie Zima, in an article published in the Revue d East-West Comparative Studies.

The purpose of the Founding Act, which formalizes NATO-Russia relations, is therefore to demine the terrain as a first enlargement looms with the membership applications of Hungary, the Czech Republic and Poland.

>> Crisis in Ukraine: Has NATO "betrayed" Russia by expanding to the East

To prevent Russia from feeling isolated or even threatened by the politico-military organization created in 1947 to guard against a Soviet attack, NATO offers guarantees to Moscow in the Founding Act: it undertakes in particular to not to deploy nuclear weapons, including storage sites, on the territory of future member countries and not to reinforce its permanent troops there.

Despite these precautions, Boris Yeltsin faces strong opposition from part of his public opinion and from the political world, who accuse him of participating in the humiliation of the former USSR by complying with Western demands.

The Russian president is convinced that this rapprochement with NATO will be beneficial to his country.

Considered a "treason" by Vladimir Putin, the enlargement to the former countries of the Soviet bloc remains today one of the main points of contention between Moscow and NATO.

The Founding Act "suffered from the Putin years"

However, a first crisis occurred in 1999 with the Western military operation in Kosovo, to which Moscow, a member of the UN Security Council, was hostile.

However, this strong opposition did not cause lasting tensions and a warming began at the turn of the 2000s. A period of relaxation which owed much to the rapprochement between Russia and the United States at the very beginning of Vladimir's first presidency. Putin.

"Following the September 11 attacks, the objective was to fight terrorism. Putin was then asking for Russia to play a more important role", explains Bruno Daroux, international columnist at France 24. Vladimir Poutine sees in these attacks an opportunity to get closer to the West, but also to silence criticism of the war waged in Chechnya, presented as a "counter-terrorism operation".

It was in this favorable context that a NATO-Russia Council was created in 2002, allowing Moscow to sit on an equal footing with each member of the Alliance.

The meetings will be interrupted in 2008, at the time of the invasion of Georgia by Russia.

Since then, relations have continued to deteriorate, making the Founding Act appear as the vestige of a bygone era.

There were "the massive war crimes committed in Syria, the annexation of Crimea in 2014 and the invasion of part of the Donbass", recalls Nicolas Tenzer, according to whom this partnership "suffered with the Putin years and an increasingly offensive regime".

Between 2016 and 2019, the Council met only five times, the last time in January, a month before the start of the Russian invasion of Ukraine.

The two parties had then noted the extent of their differences.

If the channels of communication between Moscow and the Alliance remain open, the NATO-Russia Council having never been suspended, the two former rivals have indeed become adversaries again.

Should we therefore cut ties with Vladimir Putin and Russia?

The question has agitated Western countries since the start of the invasion.

"There are again very strong tensions with Russia but at some point, and this is what creates divisions among Europeans, we will have to negotiate a way out of the crisis", underlines Bruno Daroux.

"Of course we must maintain long-term relations with Russia," said Nicolas Tenzer.

"But with Putin's regime responsible for crimes against humanity and war crimes, that's absolutely not an option."